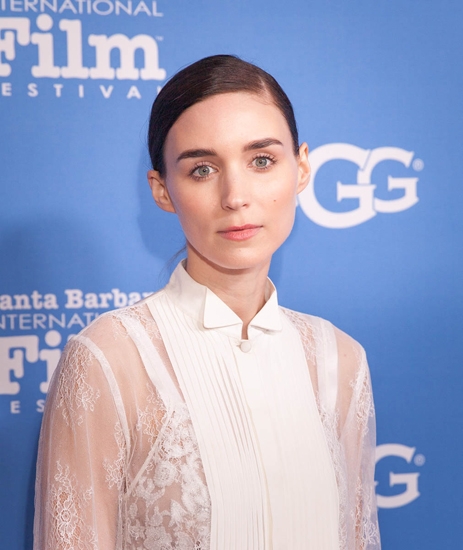 Clad in black leather and velvet open-toed pumps, the actress planted her feet on the cement of the Arlington Theater promptly at 7:30 p.m. on the bustling Friday night in downtown Santa Barbara. Academy Award-nominated actress Rooney Mara arrived punctually at the 2016 Santa Barbara International Film Festival to receive her very own tribute award. As the 2016 recipient of the Cinema Vanguard Award, the 30-year-old succeeds past winners like Leonardo DiCaprio and Eddie Redmayne.

For her contributions to the cinema in the past year, Mara is recognized for her work in the film, “Carol.” Based on the British romance novel, The Price of Salt, the film follows the love story between the divorced suburban housewife (played by Cate Blanchett) and an ordinary shop girl (Mara). The period drama revolves around the complex romance between two women from different backgrounds. Both Blanchett and Mara are nominated respectfully in the Best Actress and Best Supporting Actress categories. Having won the Best Actress Award at the 2015 Cannes Film Festival in May of last year, Mara was a shoo-in to receive an Oscar nomination months before the nominations were announced in January.

Dressed in a menswear-inspired ivory lace top and skirt, the young actress was accompanied by the film director before he presented her with the award on stage. In an exclusive Daily Nexus interview with Mara and the film director, Todd Haynes, the “Carol” duo shared a few anecdotes and memories:

Bin Nguyen: What was it like filming the love scenes with Cate Blanchett?

Rooney Mara: Working with Cate was incredible. We have a very similar work ethic. It was really easy from the rehearsal period … It definitely clicked. She is very generous and I felt super comfortable with her and with Todd.

BN: How did the period costumes help you transform into character?

RM: Costumes in any film are always a huge thing with the character … It can change everything about the way you move, depending on whether you’re wearing [it] in a scene or what point of the film your character is in. Costumes, to me, are very important. Sandy Powell is an incredible costume designer, I just [wore] whatever she told me to wear.

BN: What did you take away from filming “Carol” for your own life?

BN: Will there be more of Lisbeth Salander [Mara’s role in the “Girl with the Dragon Tattoo”] in the coming future?

RM: I believe there will be. Hopefully with me, but I really don’t know.

After the “Girl with the Dragon with the Tattoo” actress finished all the interviews, she walked inside the theater to begin the night’s events. Mara and the interviewer of the night, Entertainment Weekly correspondent Joe McGovern, both sat alongside each other and watched clips from her previous films, starting with her minimal but pivotal role in “The Social Network” all the way up to “Carol.” While appearing mildly uncomfortable watching herself on screen, the actress spoke of her fond memories working with directors David Fincher and Steven Soderbergh. A pre-taped tribute video by Blanchett played for the award recipient and the audience. The “Queen Elizabeth” actress praised her young co-star for her performance in film. At the final moments of the evening, Haynes stepped on stage to bestow his star with the Cinema Vanguard Award.

Rooney Mara is a sensational actress who captures every screen that she is in. Her graceful demure and relaxed attitude is evident on and off screen. With only a few films and nominations under her belt, the young actress has the longevity of the likes such as Meryl Streep and Helen Mirren. If she doesn’t win an Oscar for her performance in “Carol” this year, Rooney Mara will for sure win an Oscar in the definite future.