The Daily Nexus
News
Part One: Isla Vista Gets Down to Business
February 18, 2016 at 5:01 am by Vicky Munro 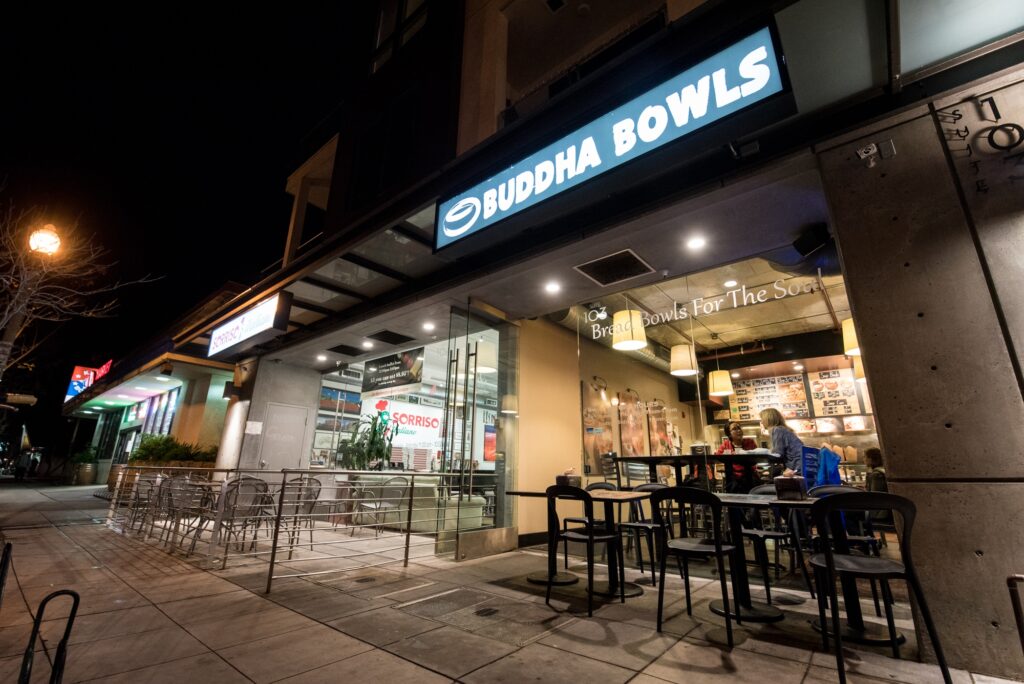 The college town environment of Isla Vista provides businesses with a constant influx of new customers, but it also leads to the inevitable loss of old ones. Lorenzo Basilio / Daily Nexus

A wide array of businesses are drawn to the busy streets of Isla Vista (I.V.), with new hopefuls arriving every year to compete for the interest of thousands of young adult customers. From chains like Starbucks to independent establishments like I.V. Deli, the two-block downtown district in I.V. sustains nearly 50 independently and franchise-owned establishments. As businesses in I.V. begin to outgrow the humble beach town, business owners in I.V. continue to stay afloat.

“The original concept was called ‘Blunts and Bagels’ and it was gonna be a dispensary bagel shop,” Daniel Dunietz, owner and founder of Buddha Bowls said. Captivated by the beach town’s creative and unique vibes, Dunietz knew he wanted to own and operate his own business in Isla Vista even before he attended UCSB.

In December of 2013, Dunietz opened the doors to Buddha Bowls. The restaurant is a testament to his desire to make people happy through unique and satisfying food and was first opened under the expectation that marijuana would soon be legalized. Dunietz said he intends to incorporate marijuana into his business as soon as it becomes legalized, but said “up until now, all we can really do is help get signatures, help get measures through, help rally the students and really try to bring awareness to the importance of voting in the next election cycle.”

While Dunietz has larger political ambitions in mind, he and other Isla Vista business owners are focused on the more immediate challenges of running a successful business in the community.

The Isla Vista Downtown Business Owners Association was formed in 2015 to market I.V., protect businesses and deal with problems of parking and safety. The college-town atmosphere of Isla Vista makes working in the beach haven both social and engaging, but the isolated location suffers from a constantly increasing flow of students, high population density and the effects of a thriving party scene.

“The sheer number of young people here, the energy, it’s a place that can really embrace something unique and different,” Dunietz said.  “It’s not somewhere that you have people that are set in their way, they’re new, they’re molding,” Dunietz said. The progressive ideologies and creative personalities of many students make I.V. a “perfect” place to operate a restaurant.

Andrea Maasz, manager of Otaco, said there are sometimes issues with rowdy customers, but I.V. is one of the best places she has worked. According to Maasz, when planning for the opening of the restaurant, Otaco’s interior designers had to take into account the energy of I.V. customers and the “potential for mayhem” in the small area.

“All our furniture is plywood because people will dance up on there. We’ve broken the stage last week and the music’s pretty loud, but overall it’s a lot of fun,” Maasz said. “People understand if something bad happens, and people are a lot of fun on the Wednesday karaoke nights; it gets crazy.”

Al Espino, owner of organic hemp product store Hempwise, said he enjoys the constant influx of new people in I.V. because it creates an “ever-changing population.”

“We’ve been in I.V. for 20 years; there’s a good and bad I guess.” Espino said. “It’s kind of like moving and getting a new location every few years.”
Rico Ochoa Suave, manager of Pizza My Heart, said he has “seen it all” when serving I.V. customers, and appreciates the town as a lively environment for business.

“It can get a little bit hectic maybe with alcohol, but it’s always a great place to be,” Suave said. 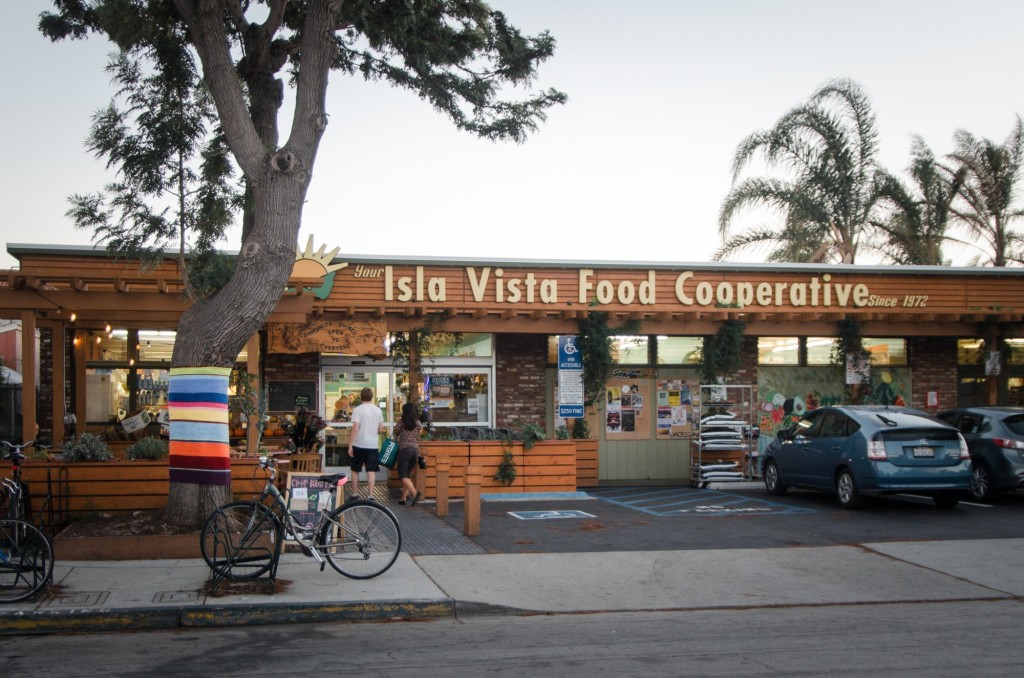 Pizza My Heart employees must be prepared to handle situations involving intoxicated customers, but Suave said customers rarely need to be kicked out.

Virtually all businesses in I.V. are squeezed into a few “downtown” blocks, stretching from 65 Pardall to 65 Trigo. The area is commonly packed with students commuting to and from campus and the congested area offers few options for parking. Beginning in 2015, I.V. stakeholders started holding weekly meetings to discuss solutions for more efficient traffic in the area.

Jacob Bergam, manager of Bagel Café, said careless pedestrians and bikers and “horrible” parking create an unappealing shopping environment in I.V.
“As a result most non locals avoid making the trek to Isla Vista business,” Bergam said in an email.

Marissa Bragstad, Isla Vista Food Co-op floor manager and outreach assistant, said non-student residents shop at the Co-op, but some of them may be “put off” from its location in Isla Vista, which is drastically different than the surrounding Goleta and Santa Barbara areas.

“We do have some shoppers that have been shopping with us for over thirty years since the Co-op first started,” Bragstad said. “But sometimes it’s hard to maintain those customers since it is a different shopping experience from if you’re going out in Goleta or downtown Santa Barbara.”

The majority of I.V.’s population flows in and out as college graduates move out of town to make place for incoming freshman. Due to the transient nature of I.V.’s residents, businesses are hard-pressed to retain customers and appeal to new residents.

The Isla Vista Food Co-op, which first opened in 1972, has in recent years begun several programs to support I.V. and encourage community participation.

“You may have a customer that shops here from their sophomore year to their senior year and then they go,” Bragstad said. “So we’re constantly trying to make people aware that we’re here.”

“There’s not a lot of long-standing folk. It sucks, you develop people, they turn into these badass adults and then fly off and do amazing things,” Glover said. “So it’s cool that that’s the case but it also sucks that you have to get rid of your best people sometimes, just out of the nature of being in Isla Vista.”

According to fifth-year math major Donald Heatherington, the increase in chain businesses was inevitable because smaller businesses have difficulty surviving in I.V.

“It’s gone from smaller, family-owned businesses to larger chains. I’ve seen a lot of businesses fail in I.V. or maybe only stay for a couple of months,” Heatherington said. “The economic climate and student schedules and tastes are pretty unpredictable, so it kind of makes sense.”

“The bad is there is a lot of downtime with all the holidays; it’s pretty much kind of stuck to the school schedule, so during any holidays it’s real quiet; during finals and test times, it’s quiet,” Espino said.

Espino said Hempwise does not have as large as an advertising budget as other businesses, and instead relies on more inexpensive, “less mainstream” forms of promotion.

“We definitely have tried to focus more on more grassroots promotion like flyers and handouts, you know, word of mouth and things like that as opposed to other years where we would do more blanket advertising through the Independent and even the Daily Nexus, which we’re not really doing so much anymore,” Espino said.
Dunietz said he has not changed his business model since he opened because his business has been successful despite changes in I.V.’s environment and increased competition.

“There could be a hundred new restaurants opened up and I still feel I could succeed because if you do the right thing and you attract the right kind of customers, you’ll be all right,” Dunietz said.

Check out the Daily Nexus next week for the second part of our series dedicated to Isla Vista businesses.

A version of this story appeared on page 3 in the Thursday, Friday 18, 2016 print edition of the Daily Nexus.