The Daily Nexus
Sign of the Times
China’s Theft of the South China Sea: It’s Definitely ‘Not That Chill’
February 18, 2016 at 6:00 am by Nik Frey 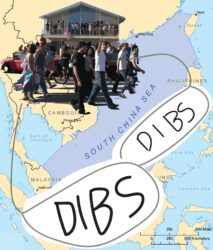 If you live in Isla Vista, you may be familiar with the game of “dibs.” It’s not a very complicated game; if you see something you like that has been unattended for a very long time or shows obvious signs of neglect (like a pair of awesome Nike Free-runs hanging on a telephone wire), you call “dibs!” and then boom — it’s yours! Some folks call it “alley-shopping,” but it’s essentially the same concept. I must admit, however, that this quintessential I.V. practice is not the most straightforward of activities; as you can imagine, there is a fine line between acquiring something that nobody cares about and actually stealing. If you were starting to question my moral compass, stealing is definitely not chill (this goes out to the scumbag who stole my Sector 9)! Sometimes, multiple people call dibs on the same item — this obviously leads to conflict. Sometimes, stupid I.V. residents leave their crap out in the open for weeks and wonder why it eventually disappears … was it stolen by an out-of-towner, or was it simply dibsed by a housemate? A better question to ask, however, is why the heck are you reading about I.V.’s moral decadence in an article that you assumed from the title would be about international relations in the South China Sea?

Just like when your housemates argue over who gets priority for the shower before work — there is usually one person who thinks they absolutely need it — well, in this case, this fine gent is none other than our good friend China.

In simple terms, I would argue that the big power game going on in the South China Sea is the same situation as multiple people in Isla Vista calling dibs on the same item. The item in this case, however, is a chain of militarily strategic islands and an open stash of valuable resources in the center of the South China Sea. Instead of your obnoxious city college neighbors or the sketchball Irish Storm party crashers (if you’ve spent a summer in Isla Vista, you know exactly what I’m talking about), the major actors in this massive geopolitical game of dibs in Southeast Asia are China, Vietnam, Malaysia, Taiwan, the Philippines and — oh yeah, America! Just like when your housemates argue over who gets priority for the shower before work, there is usually one person who thinks they absolutely need it, and in this case, this fine gent is none other than our good friend China.

So why does everyone want a share of these international waters so badly, and why is China being such a jerk about it? It’s called the “South China Sea,” so doesn’t that mean that China gets first dibs on it? Why does Uncle Sam feel the need to assert our dominance here as well — don’t we already control the entire world?
First of all, the South China Sea is like the end of the rainbow where the leprechaun stashes his pot of gold. Instead of an actual pot of gold, however, the South China Sea is overflowing with way cooler things, like oil and natural gas. Whoever controls these waters not only has the leverage to dictate the economic strength or failure of Southeast Asia, but could also dictate the future of the 21st century energy craze facing western nations.

It’s called the “South China Sea,” so doesn’t that mean that China gets first dibs on it? Why does Uncle Sam feel the need to assert our dominance here as well — don’t we already control the entire world?

So why does America feel the need to extend itself so far away from home in the South China Sea? First of all, we’re a superpower and we would prefer to stay that way. Unfortunately, being a superpower on the 21st century Earth kind of means asserting your presence just about everywhere to maintain your “superpower” status. This doesn’t necessarily mean we have to bully other nations or steal resources from them, but it does mean that our government will do whatever it can to keep trade open in places where we can benefit economically, and we definitely have a lot to benefit from in the South China Sea. For example, access to the gas and oil fields so prevalent off the Spratly Islands in particular would make the U.S. less dependable on the OPEC-controlling Middle Eastern powers — who love the western world so much already — for energy materials. Since many Americans are so opposed to both offshore drilling at home and our involvement in the Middle East, one might see how the concept of attaining oil in an area surrounded by Uncle Sam’s “friends,” like the Philippines, could be enticing. One might call it greed, but more realistic people consider it necessity. Until America figures out how to get our “sustainable” energy alternatives efficient enough to match our level of industrial output, I’m afraid that our nation is rather forced to attain energy resources from distant places like the South China Sea. China is cutting America’s trade partners, like the Philippines, off from their own resource-rich waters … Obviously, this pisses the U.S. government off a bit.

I’m also no military tactician, but you don’t need to be a General Eisenhower to see how having a naval presence in the South China Sea gives the United States an upper hand in our negotiations with Southeast Asian powers. The United States doesn’t need to start placing 1,000-foot-long aircraft carriers and nuclear-armed battleships all over the South China Sea in order to maintain economic and military influence in the region, but we definitely have a lot to lose if China calls dibs on the entire body of water, as does practically every island nation surrounding the South China Sea.

The South China Sea isn’t just some neglected, half-empty box of warm Keystone Light being borrowed for a last-minute game of beer die; it’s more like a cold six-pack of Lagunitas IPAs that the rando at your house party just stole from your fridge.

So why should you care about what China is doing? If the United States were in the same shoes as China, we would call dibs too, right? Probably, but this doesn’t change the fact that China is rapidly getting closer to levelling up to “hegemon” (World of Warcraft fans might compare this term to being a Level 70 Paladin in world politics) and they will undoubtedly use their new power to challenge not just us, but all of our allies in Southeast Asia as well. History has shown that “superpower” nations can still fall — from Spain to Great Britain to Rome — and it is ignorant to assume that the United States will simply remain this powerful forever without being vigilant of the world around us. A “nation” is no more than the people that make it up; as a part of our nation, therefore, I urge you to stay vigilant and alert to the other nations that may one day seek to challenge us.

This game of dibs isn’t as innocent as the petty theft that goes down in I.V. The South China Sea isn’t just some neglected, half-empty box of warm Keystone Light being borrowed for a last-minute game of beer die; it’s more like a cold six-pack of Lagunitas IPAs that the rando at your house party just stole from your fridge. And as previously mentioned, stealing is definitely not chill. If China keeps stealing cold fresh IPAs from the Southeast Asian mini-fridge (South China Sea), our world is going to change and Southeast Asia may become another warzone. Now is a good time to start educating yourself about it.