The University of California, Santa Barbara responded Thursday to the arrest of a suspect in the February 2014 rape and assault of a student on campus.

Daniel J. Chen, 21, of San Ramon, Calif., was arrested by UCSB Police on Wednesday and charged with four felonies relating to an assault in the early hours of Feb. 23, 2014, when three men took a woman from Isla Vista to a concealed location next to UCSB’s track and raped her for several hours. Chen attended UCSB from September 2012 to December 2013.

“It has been two years since our campus was deeply shaken by the brutal sexual assault of one of our students,” UCSB said in a statement Thursday. 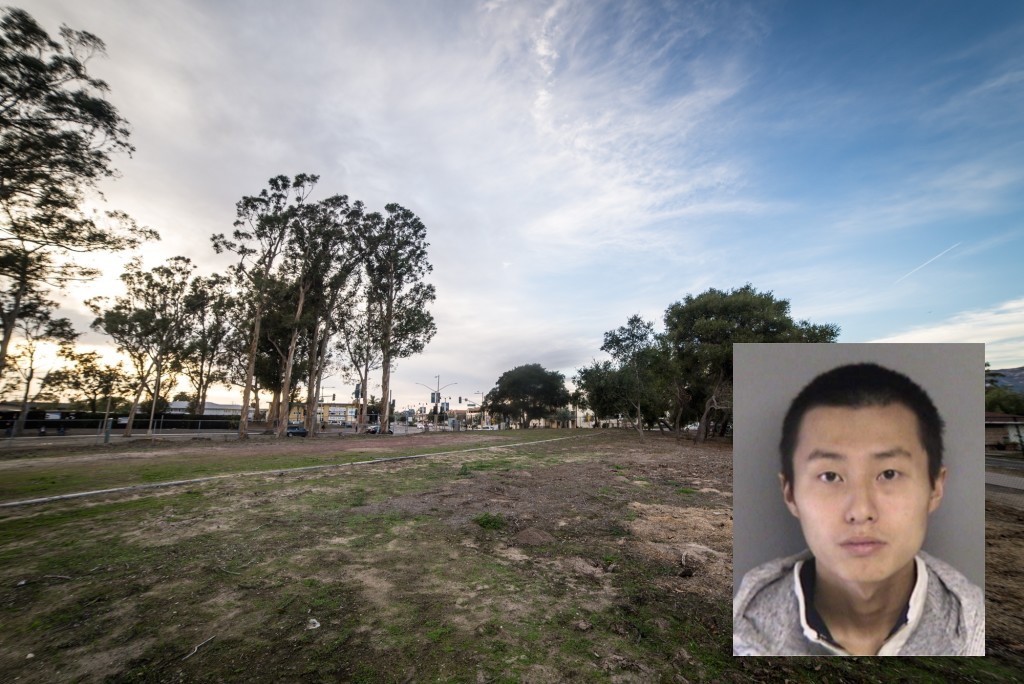 The victim was taken from Isla Vista and raped by three men in an area northwest of UCSB’s track, which was concealed by foliage at the time. Lorenzo Basilio / Daily Nexus; Mugshot courtesy of UCSB Police Department

UCSB Police Sgt. Rob Romero said Chen was arrested in Alameda County on an unrelated felony drug charge, during which authorities swabbed the inside of his mouth for DNA, ultimately leading to the rape charges.

When police in Alameda County ran Chen’s DNA through an FBI database, it matched evidence found at the UCSB crime scene. Chen was transferred to Santa Barbara County Jail on Wednesday, about a week after university police learned of the DNA match, Romero said.

The victim filed a personal injury lawsuit in January alleging, among other claims, that the UCSB Police Department was “understaffed and insufficiently trained” to investigate the case.

Tyrone Maho, one of two attorneys representing the victim, said Thursday that his client was “relieved” to hear about the arrest.

“Our client was really pleased that this developed,” Maho said. “I’m just hoping it leads to the location and the prosecution of any other assailants involved.”

Romero said that while the DNA match was a lucky break, UCPD has continued to investigate the case since 2014.

“Yes, we were fortunate from the DNA hit, but we were never not motivated to solve this case,” Romero said Thursday. “We do know there’s a lawsuit out there but we’ve just been grinding and chipping away at this case.”

In its statement, UCSB said, “We deeply appreciate the multiagency search that led to the uncovering and collection of DNA evidence, which has now resulted in the arrest of a suspect. This is a crucial step toward achieving justice and preventing future tragedies.”

The university said that while the arrest is a step forward, “it may bring renewed pain to our student and her family.”

“We keep them in our thoughts, as we have for the past two years, and we continue to offer our unwavering support and heartfelt sympathy.”

This is just some luck, to catch this low-life. Given the number of violent crimes occurring in IV regularly and the speed it get solved, it is rather disappointing it takes so long. Better resources and detective work is needed just to go back in time to deal with the backlog, not to mention dealing with new crimes. It piles up and the IV situation only gets worse, and .. it is! It isn’t rocket science, just simple math.

No it’s not simple math. You have no idea what you’re talking about.

Then, what is your better idea?

It is not luck, it is solid police work. There are frequency of violent crimes is higher in Santa Maria, Goleta, and Santa Barbara. There is no backlog, there are few new crimes. Nothing is piling up, and IV is the safest place in Santa Barbara County. All of us who live there not that. The truth is not rocket science, it is simple truth.

Time for reflection and learning some coherent English.

Time for learning some facts.

Surprised nobody has reported or commented on his social media postings. From his Vine and Twitter he appears to be a spoiled, rich kid and major stoner. Possibly another psychopathic, “affluenza” teen?

Spoiled for sure. Drugs took that to a new level. Prison will teach him the right way. There are plenty of volunteers there to get the things right into his head.

What are his Twitter and vine handles? I could only find him on Facebook and got the same impression.

“we been grinding and chipping away at this case”…..lol. what a load of bullshit. they just got the phone call…and and received the already arrested perp….being a former officer i can tell you this is not true, outta sight , outta mind.