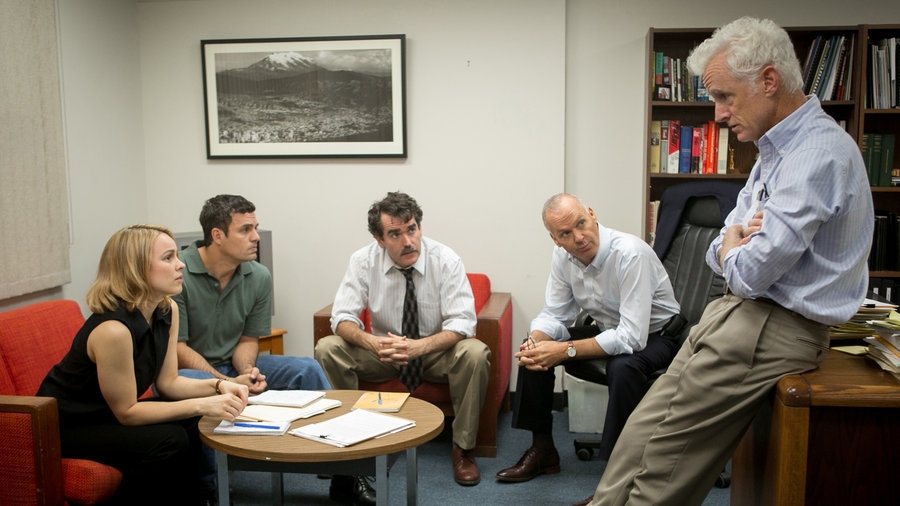 Taking place in late 2001, “Spotlight” follows the true story of the titular Spotlight special investigations team of The Boston Globe. These four reporters begin an investigation into the sexual abuses committed by the Catholic clergy in Boston. Eventually, they go on to uncover a conspiracy that goes up to the Cardinal himself.

The Screen Actors Guild recently deemed the film’s cast to be the best of any film in 2015, and it is easy to see why. What makes the performances great is that they balance being compelling and believable; they feel natural. These characters feel like they have working relationships with each other. They talk and emote like real people on account of an impressive degree of subtlety that the actors display. You don’t watch these big-name Hollywood vets and think that they’re obviously acting, trying to be someone they’re not. These are real people onscreen, so convincing is the illusion. It almost feels voyeuristic, like you’re spying on the actual journalists.

Mark Ruffalo briefly disturbs this atmosphere when he delivers an impassioned diatribe to a stoic Michael Keaton. It feels a little like exposition in order to further drive home a point, but given how impassioned he feels about the issue he’s covering, I can buy the outburst.

That’s because it is definitely a story worth getting upset over. The Spotlight staff interviews several victims throughout the film, who describe, in vivid and gut-wrenching detail, what happened to them. You feel the hopelessness that these people, mostly men from broken homes, faced. This feeling is perfectly encapsulated in one brief shot: Brian d’Arcy’s Matt Carroll stands on an apartment balcony, taking notes as he interviews a victim. The two of them are framed against a massive Boston cathedral, looming ominously in the background.

When “Spotlight” ends, it’s bittersweet. Although justice has been, in a way, served, I still wanted to see the aftermath. What happened to these journalists? How did the exposé affect their careers? What were the immediate effects of the article on the Catholic Church? I want more! Gimme a sequel! To me, that is a sign of a powerful story.

But it does feel lacking in some regard. There was a particular narrative angle I thought was going to play out, mainly because the film suggested it. Stanley Tucci tells Mark Ruffalo’s Michael Rezendes that eventually, the massive beast that is the Catholic Church will eventually go after him. And they never do. The film doesn’t even make clear whether or not the Church was ever even aware that an investigation into their cover-up was underway. It feels like a piece of the narrative is missing.

But I do want to make clear that what is here is great. I was totally engrossed in the team’s investigation. Like them, you feel curious about what’s really going on around Boston.

You share their curiosity, their shock. You sympathize with the victims as they tell their stomach-churning stories. And you feel abject horror when you realize how long and how deep the conspiracy goes. The film ends with a list of cities that has known pedophile priests.

Santa Barbara is one of them.

Gives you the chills, doesn’t it?