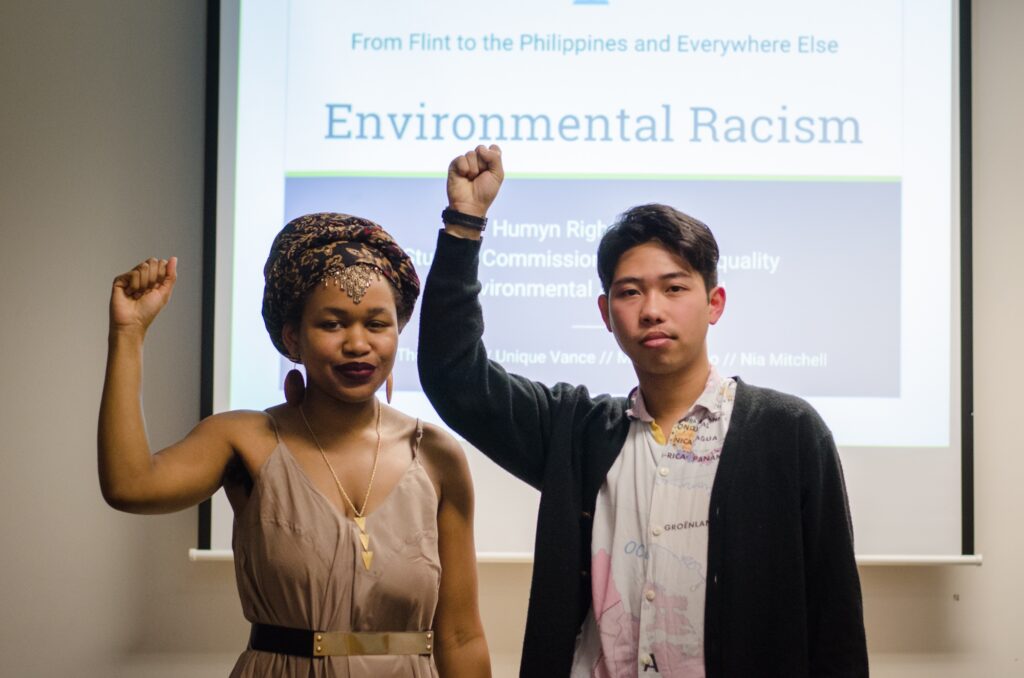 Approximately 50 students discussed the meaning and future implications of environmental racism and environmental justice at an event titled “What is Environmental Racism?” on Monday in the MultiCultural Center.

The event was presented by the Student Commission on Racial Equality (S.C.O.R.E), the Human Rights Board and the Environmental Affairs Board (EAB). Attendees discussed environmental and social realities of incidents such as the Flint water crisis in Michigan, mining on Native American reservations, the I-710 corridor project and the Marcopper Mining Disaster in 1996.

“White supremacy is an ideology in which white people or people of European descent are believed to be inherently better over people of color,” Mitchell said. “And it is institutionalized because different institutions uphold that power dynamic, so it is a disproportionate amount of power in certain communities and a lack thereof in others. When you link that system with the system of capitalism you get things like environmental racism.”

“One definition is the placement of low income or minority communities in proximity of environmentally hazardous or degraded environments,” Vance said.

Mitchell said environmental injustice is not just exploitation of the earth and its resources, but of people as well.

“It is not only that these human beings have to deal with all of this pollution, but we have to think about the flora and the fauna that is being impacted by those polluting sites,” Mitchell said. “Without exploiting land and people at the same time, capitalism, and therefore profit, cannot exist.”

Vance said government institutions, either intentionally or unintentionally, often ignore toxic waste and pollution, as in the case of Flint, Michigan where the water source from Lake Huron was switched to the Flint River as a cost-saving measure until a new supply line to Lake Huron was ready.

“The government was well aware of the consequences of lead,” Mitchell said. “Lead is a known neurotoxin to human beings.”

Mitchell said it is nearly impossible for Flint residents to sell their homes, a struggle that was recently chronicled in The New York Times.

“They are still forced to pay their water bills and they are refusing to refund them for any of that,” Orange said.

Vance said the people least responsible for climate change are most impacted by it.

“The modern day environmental justice movement sprouted from some really amazing activists and people who were sick and tired of their communities being targeted by the state for environmental issues,” Vance said.

Marjan Kris, S.C.O.R.E co-chair and second-year Asian American studies and history of public policy double major, said he and others are in the process of creating an environmental justice minor for UCSB students.

“We are planning on creating an environmental justice minor at UCSB,” Kris said. “Future first and second-years, probably third-years too, keep an eye out.”

Congratulations. When you kids graduate you be qualified to do nothing more than flip burgers. What nonsense.

what are you talking about???

what are you talking about gary fouse