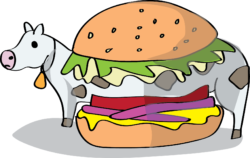 There it is, right in front of you. It is finally ready. It’s big, and juicy and your mouth is achingly waiting for that first taste. There couldn’t be a more erotic sight. As your mouth inches closer, you get a good look at it. It’s beautiful … I mean, what could be better than a double Angus beef burger with extra cheese? You’re going in for that first bite, and just as your lips touch the bun, you hear a distant “moooooo.” You quickly disregard the sound and return to your orgasmic meal, but the persistent and cruel sound won’t fade. Next thing you know, all you can see when you stare at the burger is a calf with big brown eyes staring right back at you.

This is the dilemma I face every time I try to consume meat. Right now, veganism seems to be trendier than flower crowns and flash tattoos. But is it really just a trend, or are vegans actually making choices that may change the food industry as we know it? While they claim to have nothing but good intentions, this new wave of vegans hasn’t made the best reputation for itself on social media. They have been labeled as pushy, controlling and just straight up insane. To some extent, this can be perceived as true due to the Twitter and Instagram accounts of some of the group’s extremists. However, it is important to understand the other side of this issue. These people feel so passionately about animal rights and environmental welfare that they are willing to carry these labels if that means fighting for what they believe in. There is no question that the meat industry participates in the slaughter of animals. Since the majority of Americans buy their meat in a package from Albertsons, this extremely obvious aspect is often forgotten. On top of that, most Americans don’t even know how or where the meat that they’re consuming is produced.

While they claim to have nothing but good intentions, this new wave of vegans hasn’t made the best reputation for itself on social media.

The information is attainable, but most people don’t go searching for it due to the fact that they sleep better at night not knowing. Everyone’s seen the PETA videos shared on Facebook by that one crazy, tree-hugging aunt, yet few people stop scrolling to watch them. Why is that? Is it because of a genuine lack of interest, or is it because people don’t want to feel that they are assisting in the cruel slaughter of pigs and cows? For most people, myself included, it would be the latter. I am completely guilty of ignoring those videos, simply because I don’t want to feel the guilt that I know will accompany them. I love food. Being that I’m from the south, I grew up around really good food that’s really not good for you. BBQ brisket, fried chicken, sausage gravy and bacon are all major food groups in Texas. Trying to make the change to a no-meat diet has been extremely difficult, and I’m still unsure of how I’m going to do it. All I know is that I want to do it. The desire to change my lifestyle to one that is not only healthier for me, but also healthier for the planet is what is going to give me the drive to actually do so. If many outspoken vegans realized that trying to force someone into a certain lifestyle actually hurts their case more than it helps it, they would be more successful in their efforts.

Science has already disproven this common misconception, yet people refuse to believe that humans were not meant to be carnivores.

Currently, our country is facing controversies in areas that have never been challenged before. For years, racism, sexism and religious discrimination have been normal and accepted. However, now that the majority of people agree that others are being harmed and mistreated in the process, these social norms are being fought. The most common claim in opposition to these progressive movements is that it encroaches upon other individuals’ freedoms. Some feel that they have the freedom to discriminate against gay couples in their place of business, or to keep women from having a voice simply because they live in a free country. But is that really freedom? What does freedom truly entail? Where does the line get drawn, before your “freedom” starts inhibiting the rights and freedoms of others? This is the same viewpoint that many vegans have in regards to freedom to consume meat and to defend animal rights. Eating meat is something that seems to come as second nature, because we’re taught that it’s completely normal. Science has already disproven this common misconception, yet people refuse to believe that humans were not meant to be carnivores. Our body structure, stomach acidity and intestinal tracts are all not designed to pass meat. Our bodies and minds have evolved since the time of cavemen when hunting was necessary for certain aspects of survival. We have surpassed the need to consume meat, yet we still participate in the carnage and butchery of countless animals.

Humans have this persistent idea that we are above nature and are allowed to do with it as we please, even though we have been given no indication that these animals belong to us. The idea of someone eating a dog or a cat seems absolutely asinine, yet pigs, cows and chickens are disregarded as nothing but tomorrow’s lunch. On top of that, even if people refuse to wrap their minds around the idea that maybe animals aren’t just pieces of meat waiting to be smothered in A1 sauce, animal agriculture is horrible for the environment, and contributes to world hunger. Animal agriculture produces 18 percent of greenhouse gas emissions. That’s more than all transportation exhaust combined. Animal agriculture also uses 70 percent of U.S. grain to feed animals that are being prepared to be slaughtered, when that amount of grain could feed up to 800 million people. These numbers alone should be enough to scare even the biggest meat lovers into just considering cutting back on the hamburgers.

Regardless of if you think you’d ever be able to give up your beloved bacon and In-N-Out, being educated on the issue of veganism can’t hurt. If anything, it will just allow you to be more aware of the meat that you are consuming. However, if you do decide to attempt to embark on the journey of veganism, there are plenty of benefits. I have just recently started making a real effort to at least cut out any meat that is not fish, and I have already noticed some positive differences. It’s definitely not easy, but I’m hopeful that I will eventually be able to say that I only fill my body with foods that are natural, humane and delicious.

I am not from a “developed country”. I’m from an ” developing country” and people here don’t buy packaged meat. They go to shop and select a live animal to be slaughtered. The slaughter is usually in public view. After that they cut and pack the meat and give it to them. This doesn’t make people cringe. They are not ignorant of the process, they are just resistant to change.

Well, at that point, I have no issues with the consumption of animals. It is really their torture and environmental impact that needs to be addressed.

Yes, and the environmental impacts are too great even with small scale animal farming. And slaughter cant be made humane.

I applaud you in your honest evaluation of the subject and ongoing transition away from violence against animals. M.

I used to say I loved animals while consuming them. It never occurred to me I was paying someone to kill them> I wouldn’t eat my dogs or my cats, or my bunnies, so why would I want to kill and eat other animals? Why would I want to separate babies from their mothers for milk? Most of us know veal is cruel, but the dairy industry is what supports it. The veal calves are the unwanted male calves of dairy cows. Unwanted y the farmers that is, not the cows. Cows scream and mourn for their babies when they… Read more »

Really well written article, than you for writing it. Longtime ethical vegan here. I would add this quote. Ok 2 quotes. In fact if one person is unkind to an animal it is considered cruelty, but where a lot of people are unkind to a lot of animals, especially in the name of commerce, the cruelty is condoned and, once large sums of money are at stake, will be defended to the last by otherwise intelligent people. — Ruth Harrison, Animal Machines: The New Factory Farming Industry (2013) To a man whose mind is free there is something even more… Read more »

“If many outspoken vegans realized that trying to force someone into a certain lifestyle actually hurts their case more than it helps it, they would be more successful in their efforts.” If there weren’t any outspoken vegans out there, who would know what’s happening to the animals? 6 years ago I had no idea what was happpening to them. I was vegan already for my own reasons before I found out what was happening to them. If children are being abused or any other grave injustice to humanity is happening, do we learn about it by gently pointing it out… Read more »

In addition to the ethical aspect, there are a multitude of health benefits by eating a plant-based diet. The shift away meat has started in this country, it’s just a very slow process. Look, with all the research that’s been done on the dangers of smoking (cigarettes), for some reason,people still choose to smoke.

…So you’re vegetarian then, not vegan, unless you don’t consume any eggs or dairy products

This article lacks the main issue with “vegans” of the present: to be trendy or to lose weight.
People need to understand that veganism is NOT a diet, but a lifestyle that firmly believes in the elimination of animal by-products. Yet, people continue to cake on their animal-tested makeup and cow leather boots and continue to claim they’re “vegan”.
It is a disgrace to the people who are, and have been, wholeheartedly concerned with environmental issues and animal rights.

This article is moronic

Actually, your choice to be vegan and explanation of vegan ism is terrible