This past Sunday, the No. 48 UCSB men’s tennis team picked up its second straight dual match victory with a 4-2 win on the road over No. 43 Pepperdine. 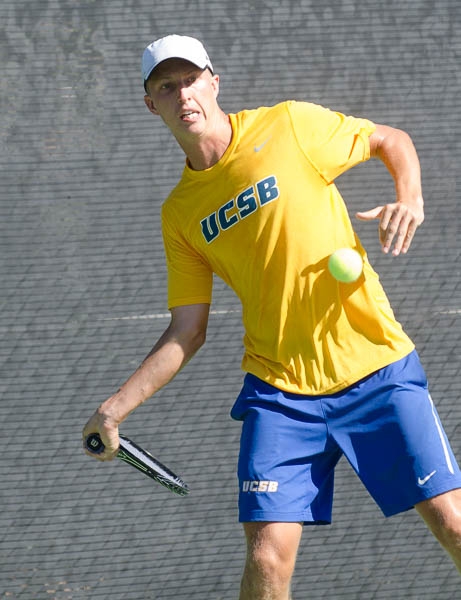 With this win, the Gauchos improved to 3-3 overall on the year while the Waves fell to 1-3.

“We got a really big win today,” junior captain Morgan Mays said. “Pepperdine is a tough place to play at and our guys really came out strong.”

Santa Barbara got out to an early lead in the match, grabbing two doubles matches to seal a 1-0 lead. Seniors Nathan Eshmade and Miles Seemann took down the No. 19 doubles duo in the country, Guilherme Hadlich and Gabriel Sydney, by a score of 6-3 to take the first match on court one.

Freshman Oliver Sec and senior Andrew Riminton took their first victory on the season together with a win on court three. The Gauchos’ duo defeated Jack Van Slyke and Tom Hill 6-3 to give UCSB the lead heading into singles play.

Despite dropping the doubles point, the Waves looked to crawl back into the match with a few early singles victories to knot the match back in a tie. Lautaro Pane took a straight set win on court four and his teammate Gabriel Sydney followed up on court six with a similar outcome to produce Pepperdine’s only points on the day.

Mays took home the first singles match for Santa Barbara as he played on court three for the first time this season. The Gaucho captain won convincingly as he only dropped five total games, beating Pedro Iamachkine 6-2, 6-3.

“I got a good win today and it was great to play outdoors in my home town again,” Mays said. “I played some good tennis and it helped our team to a win.”

The Gauchos closed the match out with a few tie-breaker wins on the lower courts. Cody Rakela picked up his first singles win of the season as he dominated Van Slyke on the tie-breaker giving him an overall win 6-4, 7-6 (7-1). No. 81 Nicolas Moreno de Alboran sealed the 4-2 win for Santa Barbara with a very slim straight set victory that called tie-breakers in both sets. When it was all over the freshman emerged 7-6 (7-5), 7-6 (8-6).

The final singles match on court one was halted in the third set when Santa Barbara secured its victory.

The Gauchos will take the courts again this weekend when they head to Grand Canyon University on Saturday, Feb. 13. The match is set to start at noon in Phoenix, Az.