The Daily Nexus
The Legal Limit
Don’t Throw Away That IPA
February 4, 2016 at 5:00 am by Amanda Quick 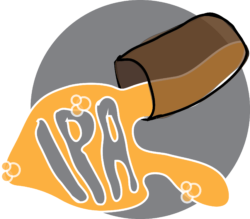 Entrance into the legal realm of 21 does not simply mean a free pass into bars and clubs — it is much better than that. There is no longer a need to binge on piss water. That’s right! The selection of beers is wide and vast for those seeking an escape from the mundane. No longer will beers such as Busch, Keystone Light or the newly popular Kirkland brand be forced down your thirsty guzzle. Take a walk into our local Keg and Bottle and you will find the Holy Grail of IPAs, or Indian Pale Ales. Do not fear these delightfully dark masterpieces. Instead, venture beyond the racks and discover a new taste and new type of buzz.

From what I have encountered, most people shy away from IPAs — the words “they’re too strong” seep from their lips. Never can a beer be too strong. In fact, it is better, in my opinion, to have a strong beer because you will only need one or two to get nice and lit. But what exactly makes an IPA an IPA, with its dense taste but still lasting smoothness? As many of you history majors may know, when traveling across seas in the early centuries (those damn colonial imperialistic days), water would be kept in wooden barrels and would have the possibility of becoming poisoned. The water would start to contain microorganisms that I’m sure would definitely give you the runs worse than any hangover possibly could. So, what was the solution? Mead water, of course. Hops were added to the water due to their anti-microbial properties. In reality, the hops would not make the beer any stronger than seven percept ABV, or alcohol by volume. In fact, a stronger beer would cause residual sugars, which attract those nasty microbes. So what happened when the trips became longer? Add more hops, obviously. This is how IPAs got their name. Voyages to India lasted much longer, so it was necessary to add larger quantities of hops to ensure the safety and hydration of these ancient voyages, circa 1770s. They can still be found presently but they’re nicely bottled and sold for about $10 on board.

There are three types of IPAs. First, an American-Style IPA. These beers tend to be more flavorful and are a reddish amber or pale golden color. An example of this type is Redhook Long Hammer IPA. This IPA is 6.20 ABV. Thus, a 12 oz normal bottle of Long Hammer would be 6.20 percent alcohol, and when you go and buy a 23 oz from PMH you’re getting about 12 percent of alcohol served to you — for $3, don’t forget. $6 towards these babies and you’re going to have a pretty damn good time. Next is the English Style IPA. Goose is one of my favorite English IPAs, at 5.90 ABV. It seems that America has again overshadowed the English. If you’re on the hunt for a glass of this smooth Goose, head into Dublins right on the corner of Pardall, where you will find this bird on tap. Lastly, if you really want to get a nice buzz and maybe some sleepy eye action, a double or imperial IPA will be the best bet. This is not your grandfather’s IPA. Woodstock’s carries a great Imperial IPA known as Double Jack. Brewed by Firestone Walker, our neighboring brewery, Double Jack is a whopping 9.50 ABV. This is the Holy Grail, and I have had a chance to taste this malicious masterpiece. Unfortunately, I was unable to enjoy this brew at Woodstock’s because I was on the go. However, I was able to find it on the shelf at K&B for, around $7 or so — the same price you would find about anywhere else on tap.

I drink a lot of IPAs; hell, I just drink a lot in general. This one in particular is incredibly smooth and does not have that bitter taste we are all so familiar with when drinking an IPA. I attended a small gathering with my jewel in hand and instantly I felt much more sophisticated than everyone else. If that sounds snobbish, then so be it, but I was not about to drink toilet water when I had a 9 a.m. the next morning. If I was going to go out and sacrifice my 10 hours of sleep, then I was going to make it worth it. The beer is really good, honestly. It does not have an extreme hoppy-ness to it, but it is not very light, either. It also does not give you an instant headache. I drank the IPA moderately, not looking to get plastered, but if I had the chance I would have definitely downed that thing and gotten a pretty nice high. The next time you have a chance to try something new, especially if you are approaching the legal age, try an IPA. Maybe not a double right away, but walk into one of our local I.V. bars and ask what IPAs are on tap. You never know, you might actually learn to like the once-known-as-a-too-strong-of-a-beer IPA.

I’m ashamed that your was used instead of you’re in my alma mater’s newspaper. Although I love IPAs and I’m drinking one right now, I had to stop reading this article once I saw that. Oh well.

You could’ve put together 10 BeerAdvocate comments at random and it probably would’ve read better than this :/

I can’t believe the Nexus allowed this crap to be printed. This is a university. Even if you aren’t a science major, you should know how percentages work. This is like saying my car gets 20 miles per gallon so if I put in two gallons I’m getting about 40 miles per gallon.