The Daily Nexus
Music
Hood Internet to Mash Up SOhO
February 1, 2016 at 5:00 am by Thomas Mannell 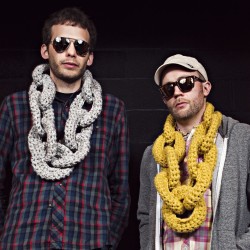 At 9 p.m. on Thursday, Feb. 4, an unprecedented event in the universe will be happening in downtown Santa Barbara. Stars will be colliding one after another after another, putting SOhO’s structural integrity to the test. Mashup masters The Hood Internet will be pitting Kendrick Lamar vs. Taylor Swift, Hall and Oates vs. Daft Punk, Mac DeMarco vs. Nas and a variety of other unlikely nemeses in a groove-filled jam-off of cosmic proportions.

ABX and STV SLV (Steve Sleeve), also known by their earthling names Aaron Brink and Steve Reidell, are the two Chicago-based mixmasters who comprise the act. The duo is known for their ability to find unexpectedly complementary artists and blend them into a beautiful beast of their own design. The group is a proverbial Dr. Victor Frankenstein of the music world and, similar to Frankenstein’s monster, every townsperson is up in arms about what they’ve created — only this time, the arms hold glowsticks and flasks, not torches and pitchforks.

Since 2007, The Hood Internet has released one studio album and 10 mixtapes, a fact that speaks to the group’s modus operandi: mashing. Their catalog of music therefore consists almost wholly of mashups with a sparse representation of their own music worked in. At SOhO, attendees can depend on the pair to play the crowd favorites: a cross between R. Kelly’s “Ignition” and Phoenix’s “1901,” a synthesis of Justin Timberlake’s “Suit and Tie” and Daft Punk’s “Get Lucky,” and their original song “Won’t Fuck Us Over.”

Aside from dicing up pop hits and touring the nation, the group also runs a blog, aptly named thehoodinternet.com. This, along with their SoundCloud, is where they release their music and keep fans updated. They are also the creators and administrators of albumtacos.tumblr.com, a popular board in which users input album covers with tacos and assorted fast foods photoshopped into the artwork. As their name suggests, the group is a living, raging tribute to the growing culture crossover of EDM and the mainstream internet (memes, internet celebrities, etc.). They even mixed the music for the most recent Youtube Rewind (link: https://www.youtube.com/watch?v=KK9bwTlAvgo), the video anthem to this entire culture-combo.

The group will be coming off a few days of rest and nearing a close to their Western U.S. tour when they make it to Santa Barbara. Tickets range from $10 to $12 and doors open at 8 p.m.