The Daily Nexus
Water Polo
No. 11 UCSB Prepares for First Road Test of the Season, Will Participate in the Michigan Invitational
January 28, 2016 at 5:01 am by Sinead Leon

After a weekend of top-ranked competition, the No.11 UCSB women’s water polo team will hit the road to compete in the Michigan Invitational, where it hopes to improve on its 3-2 overall record. 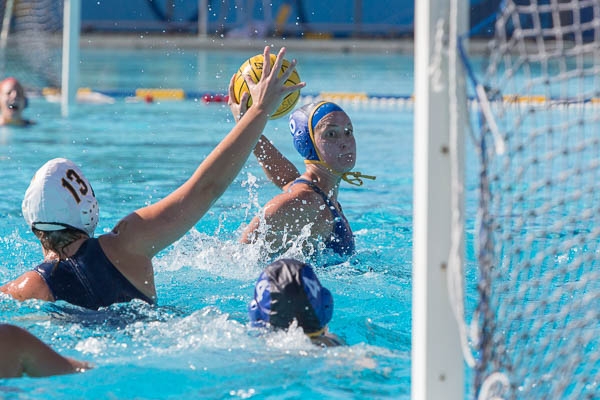 Miranda Schrader takes a shot into the corner of the goal. Dustin Harris/Daily Nexus

The Gauchos will once again face four top-20 nationally ranked teams this weekend, including No. 12 Pacific and No. 7 Michigan.

Despite losing to No. 2 UCLA and falling to No. 6 Cal in an intense game that went into overtime, Santa Barbara feels confident about its upcoming performance this weekend, even though they will be playing in a different setting than what they are used to.

“We have a lot of players who are from Southern California who have probably never seen snow before, but we will be ready,” Head Coach Serela Kay said. “Adversity a lot of the times builds character.”

With an outstanding performance in her first games after red-shirting a season, senior center Lauren Martin leads the team with 10 goals from this weekend.

“I think we made a statement,” Martin said about the Gauchos’ execution. “We played really good defense and we communicated really well.”

Right behind Martin are junior utilities Miranda Schrader and Taylor Shore with seven goals each. Contributing to the offense was attacker Bryn Hudson, who had seven assists and four goals as well.

Aside from maintaining a tight defense throughout the weekend, the Gauchos also counted on senior goalkeeper Mackenzie Brokaw, who had 44 saves in total. In the last game against Wagner, Brokaw recorded a season-high of 15 saves, limiting the Seahawks to just six goals.

Santa Barbara will begin the weekend against No.17 Hartwick. The Hawks, who will see their first action of the year this weekend, tied for 18th last season with an overall record of 20-19, collecting their 14th-straight 20-win season.

Senior driver Brittany Tait received ACWPC Honorable Mention, All-American and CWPA Honorable mention for the Hawks in 2015. She led the team in steals with a total of 64, and recorded 42 goals during her junior season.

Shortly after the first game, the Gauchos will take on No.12 Pacific. With an overall record of 1-3, the Tigers are on the hunt for wins.

One of their key players is freshman attacker Kyra Christmas. The Alberta native kicked off her collegiate career with an outstanding performance at the LouStrong Invitational, scoring 19 goals in her first four games.

Christmas helped the Canadian U-19 team to third place at the 2014 Pan Am games and was the top scorer at the Worlds Hungary Tournament.

On Sunday the Gauchos will play against No. 7 Michigan in the afternoon and No.15 SDSU at night.

The Wolverines finished with an overall 3-2 record in their appearance at the UCSB Winter Invitational.

Michigan swept the weekly awards with senior attacker Ali Thomason who received CWPA Player of the Week after tallying 19 goals, two assists, four steals and 17-of-19 sprints won. The Defensive Player of the Week went to senior goalkeeper Julia Campbell, who had 35 saves, and the Rookie of the Week was awarded to freshman defender Kim Johnson who managed to put 12 away.

Santa Barbara will wrap up the weekend with No.15 SDSU, who will play its first games of the year in this tournament.

The junior utility was named GCC Co-Player of the Year and earned ACWPC Honorable Mention All-American last season. With 61 goals, 53 steals and 18 assists, she finished second in the GCC for goals scored.

Having played against top-notch competition last weekend gives the Gauchos a bit of an advantage for the upcoming games, especially since two of them have yet to see action this year.