The Daily Nexus
Sports
Gauchos Travel to UC Davis for Rematch With Aggies this Satuday
January 28, 2016 at 5:03 am by Sean White

The UCSB women’s basketball team will remain on the road for its only game of the week, facing UC Davis in a rematch this Saturday. The Gauchos ended Davis’ undefeated conference start last Thursday with a 66-59 upset over the Aggies in the Thunderdome. 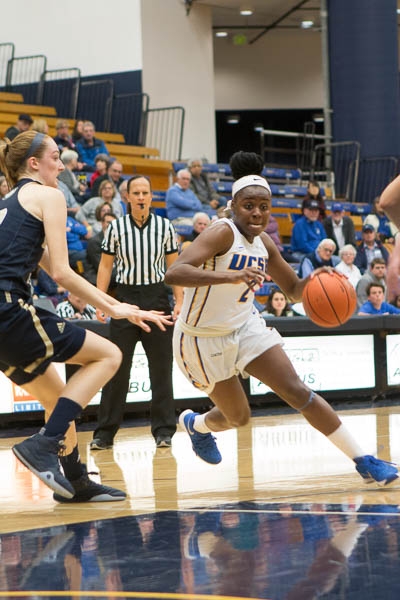 Jasmine Ware drives into the paint to score a layup leading to an and-one. Stephen Manga/Daily Nexus

Despite being undersized against Davis’ lineup, the Gauchos know that their effort on the defensive end of the court will be the deciding factor in this weekend’s contest as they look to regain second place in the Big West standings.

Santa Barbara enters Davis with a 7-13 overall, 4-2 conference record and is hoping to overcome being swept in its season series against UC Riverside after a 92-81 loss to the Highlanders last Saturday. UC Davis regained its second place standing in the conference as a result of UCSB’s loss and with a 75-57 victory over Cal Poly. The Aggies will host Santa Barbara with records of 11-7 and 4-1 in Big West competition.

Prior to the start of conference play, the Gauchos’ identity as a team was a questionable matter heading into the conference portion of the season.

However, through six Big West games, UCSB’s identity continues to gradually build around its improvements on offense. Santa Barbara has nearly improved in every statistical category since the beginning of conference play. UCSB currently ranks third in the conference in field goal percentage at 45.8, fourth in points per game with an average of 68.0 and fifth in three-point percentage at 35.5.

While Santa Barbara has improved offensively, its prowess on defense has turned into a source of scoring as the Gauchos’ average of 9.2 steals per game ranks second in the Big West. As UCSB has forced opponents to turn the ball over, it has influenced the flow of ball movement in UCSB’s offense and will be a vital asset in the Gauchos containing the Aggies.

“Sometimes you just think execution is on the offensive end, but it’s on the defensive end as well,” Head Coach Bonnie Henrickson said. “Their [UC Davis] guards will try to post us because we’re a lot smaller. For us to try to pressure the post on a pass will be important for us.”

Moreover, UCSB averages 16.0 assists per game, ranking third in the Big West. Leading UCSB’s passing attack has been junior point guard Onome Jemerigbe. She ranks second in assists per game, nearly doubling her average since the start of conference play improving from 3.9 to 6.7 per contest. She posted a career-high 10 assists in the first meeting versus the Aggies as she dished dimes to teammates like sophomore guard Makala Roper who scored a game-high 26 points in the victory.

“As a point guard, you’re always kind of held at a different level and Coach Bonnie has made that clear,” Jemerigbe said. “She’s been pushing me and every time she pushes me I get better. My teammates help me of course, without them knocking down the shots, I don’t get the assists.”

Although UCSB’s defense has been a disruption in the passing lanes for opponents, the Gauchos’ quick hands will not always make up for their size disadvantage. It is a drawback that has affected their performance when rebounding the ball, landing UCSB with a conference low average of 30.3 boards per game.

Although Davis grabbed just seven more rebounds than UCSB in the first meeting, outrebounding the Gauchos 40-33, the Aggies’ ability to rebound the ball is essential to capitalizing on their size.

Davis’ length provides a versatile element which goes beyond it being a threat in the paint. It is also the reason the Aggies have been such a lethal team when shooting the ball from beyond the arc in being able to rebound the ball and make the passes to set up perimeter shots.

Gianotti registered her first career double-double in Davis’ loss to UCSB, tallying 19 points and 10 rebounds. Her dual-threat ability to shoot from behind the perimeter and score in the post in the ideal complement to redshirt freshman forward Morgan Bertsch.

UCD held UCSB to just seven points in the first quarter of last week’s contest. Yet, both teams registered first half field goal percentages below 30 percent in the initial meeting.

“We always say don’t have amnesia,” Henrickson said. “The rules on offense are: drive it, shoot it, but don’t hold it. When things work, keep doing it and when things don’t work, quit doing it.”

UCSB and UC Davis will tipoff at 3 p.m. on Saturday, Jan. 30 in the Pavilion.