The Daily Nexus
Sports
Gauchos Look to Capitalize on Momentous Win, Face LBSU Tonight
January 28, 2016 at 5:05 am by Michael Jorgenson

Coming off a big 74-61 win over Cal State Northridge on Saturday, the UCSB men’s basketball team heads on the road hoping to continue its momentum tonight against Long Beach State. The last time these teams played just eight days ago in Santa Barbara, the 49ers never trailed and won in convincing fashion 77-67 behind sophomore guard Justin Bibbins’ game-high 25 points. 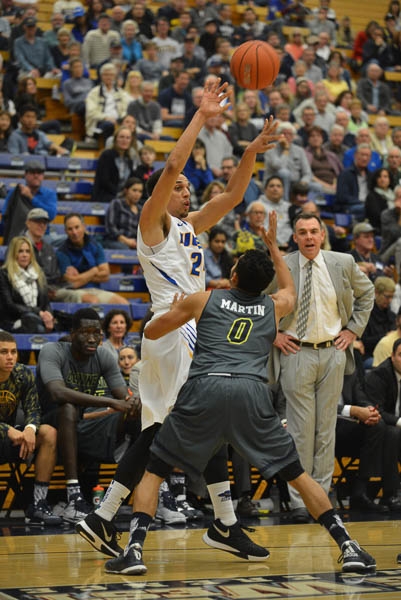 The Gauchos have remained in the middle of the pack for most of the early conference season, currently sitting in a three-way tie for fourth place at 8-10 overall and 2-3 in the Big West. However, a win tonight could potentially move them into third place, where the 49ers currently stand at 9-12 overall, 3-3 Big West.

Lack of energy in the second half has been an Achilles heel for Santa Barbara.  They have been outplayed for long stretches in multiple games, most notably when they went scoreless for the final 10:50 in a 61-52 loss to UC Irvine 12 days ago.

The Gauchos’ last two games have seen a reversal to that trend, most recently when they used a 16-3 run to open the second half in what was a close game against Northridge. They eventually went on to snag the much-needed win, their only victory in a three-game home stand.

Against Long Beach in the prior game, UCSB bounced back from a miserable 23 point first half to put up 44 in the final 20 minutes, making a run reducing a 15 point lead to just six before coming up just short. Senior guard Michael Bryson scored a team-high 23 points on 10-16 shooting in that game and currently leads the Big West with 18.9 ppg.

The 49ers were led by Bibbins in that game, whose performance was called “sensational” by UCSB Head Coach Bob Williams. The 5’8” guard torched the Gauchos for 25 points on 8-12 shooting including 5-5 from three-point range, putting in a dagger layup with 2:11 to go that ended all hopes of a UCSB comeback. He leads his team with 5.3 assists per game and averages 11.4 ppg for the year.

More offensive balance would be huge for a Gaucho team that has struggled to score, averaging a second-worst mark of 65.2 ppg as a team since the beginning of conference play.

Surprisingly, they have made a second-best 38.2 percent from three during that same stretch, suggesting they may need to rely more on their outside shooting.

Sophomore guard Gabe Vincent has been UCSB’s top threat from deep since finding his shot in recent weeks. He ranks second in three-pointers made since the beginning of conference, making 18-42 for a 42.9 percent mark.

Getting center Sam Beeler more involved deep in the paint could also prove beneficial for the Gauchos, as the 6’10” senior leads the conference by a mile with a 74.4 shooting percentage. He is coming off a perfect 12-point, 6-6 shooting night against Northridge.

Other than Bibbins, the 49ers only other double-digit scorer is Nick Faust, who puts up 15.5 points and 5.5 rebounds a night. The senior guard played three seasons at Maryland, where he was one of the Terrapins’ key contributors and was named to the All-ACC Freshman team. He transferred to Long Beach in 2014 before sitting out an NCAA-mandated redshirt season last year.

Tonight’s game will tipoff at 7:30 p.m. at Walter Pyramid in Long Beach and will be shown on Fox Sports Prime Ticket.

A version of this article appeared on page 10 of January 28, 2016’s print edition of the Daily Nexus.