The Daily Nexus
Science & Tech
Translating Research into Industry
January 28, 2016 at 6:00 am by Mackenzie Gorman 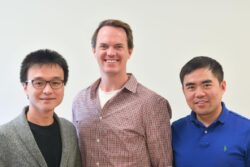 UCSB’s Technology Management Program (TMP) is a rare and unique program that allows students of any major to complement their studies with a certificate in technology management. Essentially, it provides business training for those who wish to learn more about business and entrepreneurship. A very important component of TMP is the annual New Venture Competition, which allows students to compete by creating their own startup business plans. Through this competition, many winners have gone on to create real companies.

The origins of a large number of Medical Technology (medtech) companies in the Santa Barbara area trace back to the TMP New Venture competition. In the past five to 10 years, there has been a trend of many winners going on to transform a business plan to a true business.

Aptitude Medical Systems was created in such a way. Aptitude’s CEO, Scott Ferguson, competed alongside two other graduate students with a plan based on some very revolutionary research they had done in a UCSB lab for their graduate work. Before the competition, they tossed around the idea of creating a company based on their research. They went into the competition with a lot of confidence in the science and engineering aspect, but with much less confidence in idea of translating their research into something commercial. This is where TMP became a vital component in turning their ideas into a viable and successful company.

“I think the best thing about the TMP program was that it brought in people from the industry, that you could have direct conversations with. The caliber of people that came in was awesome,” Ferguson said.

Part of the class component of the New Venture competition included many people from the industry coming in to speak, help, guide and inspire students. Ferguson stated that one of the most usable things that these people from the business industry did was to reinforce the idea that they could create the business if they really aspired to it. It inspired the group — and other successful groups as well — to get in front of a lot of real companies in the industry. This helped them see that they could do it for real; they could transform their groundbreaking work in the lab to a commercial product and a working company.

In their research, Ferguson and his two colleagues created synthetic molecules called aptamers that overcome the limitations of antibodies. Aptamers can be used to detect disease earlier, or to find certain targets or biomarkers that antibodies can bind to. In addition, aptamers can fold up on themselves and specifically bind. They are very stable, fold reversibly, are completely synthetic and are both very easy and very cheap to synthesize; there’s a broad spectrum to what they are capable of, which makes them very powerful. There is an incredible range of both diagnostic and therapeutic uses for aptamers, and these are commercially available now because of UCSB students’ research that was fostered into a company through TMP.

Ferguson thinks very highly of the TMP program for graduate students, joking that he thinks it should be mandatory for everyone.

“For undergrads that are learning some really basic science and are going to go out in the workforce, I think it is extremely valuable,” Ferguson said.

And overall, “I think it really does help people reach their full potential, build capital and ultimately create better stuff for the world,” Ferguson shared.

There is a similar story about the Santa Barbara startup called ActiveLife Scientific Inc. Computer engineering undergraduate Davis Brimer competed in the New Venture competition in his senior year at UCSB with a business plan based on an invention created by UCSB Professor Paul Hansma. Hansma played an integral role in the creation of ActiveLife, although the co-founder stuck to the research side while Brimer took over the business side. It was a great match.

“We had same ethics, same morals and same motivations for what we were doing — a shared passion for helping people,” Brimer said.

Brimer was determined to win the competition, and he did. Although he never planned to immediately start a company out of college, Brimer took advantage of this opportunity. Something that he learned through the TMP program was that business is a lot about the connections. Similar to Ferguson, Brimer took advantage of the resources TMP provided in the form of the mentors that were in the business industry in the area.

Brimer shared about the progression of ActiveLife. TMP provided both the knowledge and resources that helped Brimer make a success story out of ActiveLife.

“I learned through TMP that a big part of it is about networking. Several mentors ended up mentoring us through the New Venture competition, and some became our investors,” Brimer said.

Today, ActiveLife makes bone instruments that test bone and tissue health. This allows better treatments to be created and utilized, better results to be provided by doctors and people to overall live healthier and more active lives.

As mentioned by Brimer, some people involved in TMP continued to be a part of the company even after the competition was over. One such person that is involved in both ActiveLife and Brimer is TMP professor Robin Campbell.

Campbell has over 25 years of experience in the biotechnology and pharmaceutical world, and has been involved with the TMP program since 2002. His past ranges from being Vice President and General Manager of Oncology Business at Amgen, Inc. to being president CEO at Naryx Pharma, all stemming from a PhD in Immunology and Microbiology. Currently, Campbell serves as a board member for ActiveLife as well as chair of the board for Aptitude.

Campbell sees a lot of great medtech and biotech companies emerging from the TMP program, which he holds in high regard, and in this way the program fosters pride as well as the economy.

“It’s great for the community. A lot of the companies that emerge out here stay here,” Campbell said.

Campbell details how the TMP program facilitates and helps guide much of the research coming out of our university and helps classically trained scientists know that they can incorporate the business side into their science.

“Anything that a lot of the faculty here can do to help, who have had a little bit of experience, helps jumpstart that for students. I think that benefits everyone down the road: new businesses, new jobs, new economic opportunities,” Campbell said.

TMP is the perfect supplement, and perhaps a great idea, for those with formal training in their major but no experience with business. Due to the influence of TMP, the strategies and information learned from teachers such as Campbell, and the resources and opportunities provided through the New Venture competition, businesses have been born. These companies contain research and science that can change and is changing the world. Lives will be improved and even saved through these companies, and TMP is a crucial factor in this.

A version of this story appeared on p. 14 of the Thursday, Jan. 28 print edition of the Daily Nexus.