The Daily Nexus
Tennis
No. 48 UCSB Unable to Achieve Upset Over No. 6 Georgia, But Defeat No. 37 Louisville to End Weekend
January 25, 2016 at 5:02 am by Daniel Moebus-Bowles

This past weekend, the No. 48 UCSB men’s tennis team traveled to Athens, Georgia to compete in the NCAA National Indoor Championships. The Gauchos split their matches in the tournament, falling to No. 6 Georgia by a score of 4-1 and defeating No. 37 Louisville 4-3. 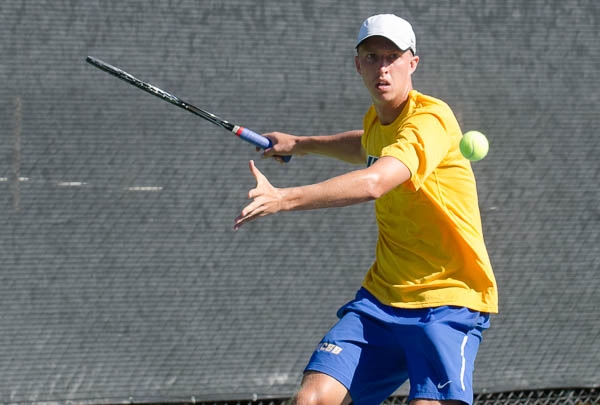 Nathan Eshmade waits for the ball to take a swing. Christina DeMarzo/Daily Nexus

With these two matches in the books, the Gauchos move to an overall dual match record of 2-3. The Bulldogs improved to 1-0 and the Cardinals fell to 3-3.

Santa Barbara opened up the match with host Georgia in doubles play taking a big win on court three. The freshmen duo of Anders Holm and Oliver Sec took a convincing 6-2 win over the No. 45 pair in the country, Emil Reinberg Wayne Montgomery. Unfortunately it was not enough as the Bulldogs captured wins on courts one and two to gain the doubles point and take the overall lead 1-0.

Georgia worked through the match quickly as the team paired its doubles points with three singles victories in the first four completed matches to take a 4-1 victory. The rest of the matches were halted upon the Bulldogs gaining their match sealing point.

The Bulldogs took straight set wins over the Gauchos on courts one, two and four, but a bright spot emerged on court three for Santa Barbara. No. 81 freshman Nicolas Moreno de Alboran faced a highly ranked opponent in No. 40 Paul Oosterbaan and picked up the Gauchos’ only point of the day with a straight set victory of his own. The freshman topped his opponent 7-5, 6-3 beating the third highest ranked player on the Bulldog roster.

Taking a fall in the first round and their third straight loss on the season, the Gauchos looked ahead to the consolation round, where they would see No. 37 Louisville.

Santa Barbara again tripped out of the gate, dropping the doubles point as the Cardinals sealed a 1-0 lead with wins on courts one and two. The Gauchos would need four singles wins to take the match and end their short streak of losses.

The Gauchos quickly gained their first lead of the match and put the Cardinals in a tight spot as they came away with the first three completed singles matches. Senior Nathan Eshmade, Moreno de Alboran, and freshman Oliver Sec all captured straight set victories on courts two through four, respectively, putting their team up 3-1 overall. Santa Barbara needed just one more court to take the win.

Louisville would answer with two sweeps of its own on courts one and five to put the Cardinals back in striking distance at 3-3. The match came down to court six.

Freshman Anders Holm faced Christian Haushammer and found himself down early, dropping the first set of the match. Despite playing with an injury to his ankle, Holm grinded to keep the second set close. His opponent took the lead and held match point twice in the second, but Holm was able to force a break and eventually take hold of the second set. The final set decided the match and Holm emerged victorious taking a convincing win in the third to give him a 1-6, 7-6 (7-4), 6-2 win and No. 48 Santa Barbara a 4-3 win over No. 37 Louisville.

The Gauchos will return home this week to make the short trip down south to Pepperdine on Sunday, Feb. 7. The match is set to start at 1 p.m. in Malibu, Ca.