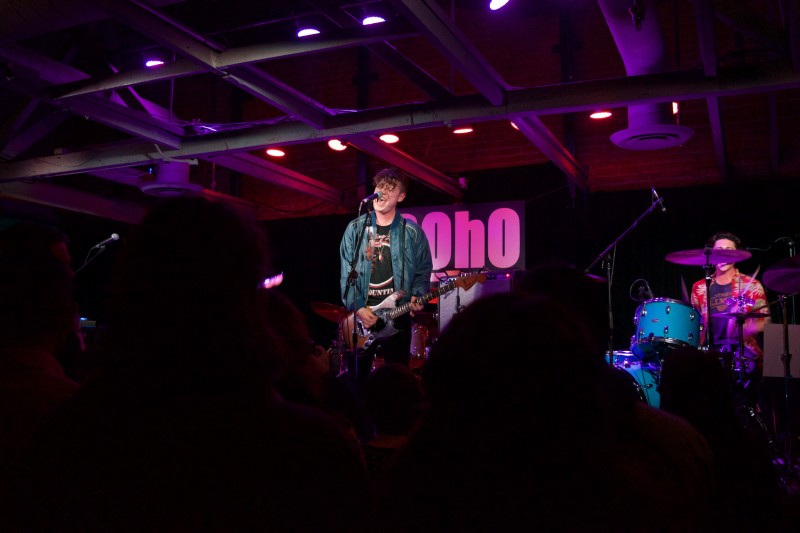 After enough DJing, Dreamers plug in and slam, shredding mercilessly upon their instruments. A dream-catcher hangs and trembles from lead-singer and guitarist, Nick Wold’s, mic stand. Three voices spill from the stage as drummer Jacob Lee Wick and bassist Nelson join Wold in vocal support. Along with the impeccable sound engineering at the club, the lyrical Dreamers kept SOhO moving.

Emerging from the spray-painted streets of Greenpoint, Brooklyn, the group has set out on their first tour. Now they are stationed in L.A. working on their album to be released in mid-to-late March. Surprisingly, this will be their first LP release, although an EP came out in November of 2014. The stage chemistry between the members along with the vibrations and melodies emitted from their instruments portrayed the band as congruous as old veterans.

Their sound was not entirely unfamiliar, but stood out among others within their indie-rock genre. A mixture between Young the Giant and a more-garagey Two Door Cinema Club,Dreamers’ music kept the atmosphere buzzing and excited.

Their tracks “Shooting Shadows” and “No Love” cascaded throughout the dance pit, and “Wolves” shook the rafters, grey-painted metal pipes and the floor beneath the audience’s feet. The energy spewing from the audience stomping and jumping across the wooden floorboards harmonized fluently with the band’s.

Brightening up the crowd magnificently, Dreamers made way for Brazilian Girls! Immediately, the lights were dimmed and only the stage light set furthest upstage glowingly alighted the back of the stage in a light fade. This hardly provided enough light to envelop the drummer, Aaron Johnston, if anyone. guitarist Jesse Murphy, lead vocalist Sabina Sciubba and keyboardist Didi Gutman were left to prance around in the dark.

Besides the probable request for limited lighting by the band, they spun SOhO around and around until the audience was screaming for an encore at the end of the show. Their upbeat, dance-infused jazz and bossa nova peppered electronic reggae grew out of darkness, awing the crowd.

They opened with their new single, “Critics,” which elegantly introduced the public to the pleasant weirdness comprising a good portion of Brazilian Girls’ work. Later, favorites such as “Don’t Stop” and “I’m Still Sleeping” sprayed over the crowd. Thankfully not the last song in their repertoire that night, “Pussy” was performed toward the end of the show; it would have been the obvious choice, but not the only great one. Instead they closed with a “jammed” version of a past album track.

The crowd moved with the beat of the music. Sciubba’s alluringly mysterious stage presence crept throughout the space as the front rows shined bright white in smiles. She arrayed herself in a long, draping black sports coat over a deep blue tank top aflame in fire emblems of orange and yellow. Shiny royal blue tights in star emblems aligned her skinny legs.

Brazilian Girls effortlessly breathed vibrant life into downtown SB, enticing young and old to dance a night away in pure joy. As unique, strange or varied the troupe’s musical endeavors are, they maintained a danceable energy that locals of SB thoroughly inhaled, devoured, respected and enjoyed.