The Daily Nexus
Sports
UCSB with 66-59 Upset Victory over UC Davis Thursday Night, Rematch at UCR on Saturday
January 22, 2016 at 12:13 am by Sean White

A surging 20-8 scoring run in the remaining 5:10 of the third quarter paced the UCSB women’s basketball team in its 66-59 upset victory over UC Davis. Despite a 3-15 three-point performance in the first half, the perimeter shot guided the Gauchos to victory when all was said and done. 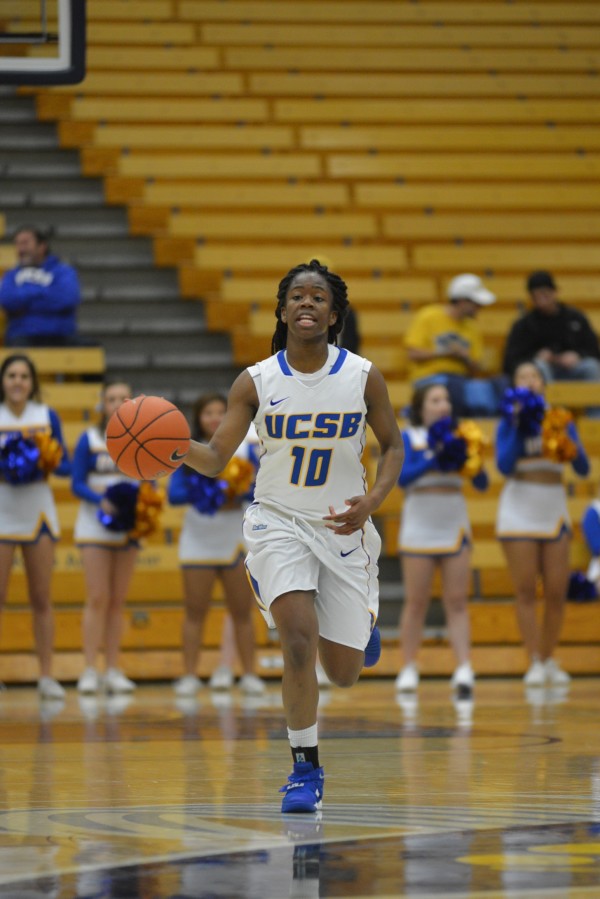 “I think this is one game and it should give us a lot of confidence,” Head Coach Bonnie Henrickson said. “It keeps our streak alive. What it proves is we beat Davis tonight, it doesn’t prove anything else. Hopefully what’s appreciated is how hard we play and how unselfish we play.”

Thursday’s victory extended UCSB’s winning streak to three games and placed the Gauchos in second-place of the Big West standings as they are now 7-12 overall, 4-1 in conference play. Davis moved down to third-place in the standings after encountering its first conference loss which snapped its four-game winning streak making the Aggies 10-7 overall, 3-1 in the Big West.

It was a low scoring start for both teams as the first basket did not occur until two minutes into play. The Gauchos shot 2-17 from the field in the first quarter as a three-pointer and layup by Roper were the team’s only field goals, prompting her total of 10 points in the first half. Davis shot 4-14 to open the game, but an 8-2 run helped it to take a 10-7 lead at the end of the quarter.

Santa Barbara managed to respond with an 8-2 run of its own in the early stages of the second quarter, going up 15-12. Still, in spite of scoring stretches from both offenses, neither could establish a consistent source of scoring finishing the first half with field goal percentages below 30 percent.

Yet, after a 0-7 shooting effort in the first quarter, senior guard Jasmine Ware managed to gain her shooting rhythm with back-to-back jumpshots to set UCSB up with its 22-20 lead at halftime. She led the Gauchos’ bench in scoring with 15 points in addition to grabbing five rebounds.

“Jas is playing the four now because we’re depleted a little bit,” Henrickson said. “She hits timely shots. I thought she was antsy to begin with, but had the big three at the end of the third quarter. She guards, rebounds, has phenomenal effort and a big heart. We feed off of her.”

After a three-point make by Roper, Ware drained a shot from long distance on the Gauchos next possession to regain the team’s double-figure lead of 47-36 heading into the fourth quarter.

It was a noticeable effort by the Aggies in the second half to attempt to capitalize on their size advantage in the paint after shooting 28 percent from the field and 22.2 percent from behind the three-point line.

Davis found success in its plan to go down low, achieving a 53.3 field goal percentage in the second half. Leading the Aggies was sophomore forward Pele Gianotti with a double-double of 17 points and 10 rebounds. However, she would be the only Davis player to finish with double-figures in scoring as the Aggies were unable to overcome their deficit.

Entering Thursday’s contest, UCSB was shooting just 29.2 percent from beyond the arc. Although the team couldn’t convert the three-point shot in the first half, Henrickson never doubted the Gauchos’ shot selection from deep as they went 7-12 from behind the three-point line in the second half.

“We said that going into the year we would have to manufacture offense from the three-point line because we aren’t very big inside,” she explained. “A pretty good chunk of those [three-point shots] are pretty good shots in rhythm. We just talked about shot mechanics– footwork, be a ready shooter, you shouldn’t be surprised by somebody trying to drive and kick. They’re 3-15, [we] tell them shoot it, just shoot it with good footwork and shot mechanics because we can knock those down.”

Five of the Gauchos’ seven three-point field goals in the second half occurred in the third quarter, a period in which UCSB outscored UC Davis 25-16.

As freshman guard Coco Miller picked up two quick fouls in the first half, senior guard Dioseline Lopez provided an energetic spurt of offense in her 14 minutes off the bench. She finished the game with five points, went 2-2 from the field while her lone three-point make was the stimuli to the team’s momentous run in the third quarter. Also aiding the Gauchos’ run was junior forward Mi’Chael Wright. In 12 minutes of play, Wright concluded the night with five points, three rebounds and drew a crucial offensive charge on the defensive end of the court to sustain UCSB’s great play.

“Those are big minutes of production from two kids who haven’t played a lot lately,” Henrickson said. “Give them credit for being mature enough and hanging in there. If you’re dialed in on the bench, you’ll get rewarded for that. Any kids that pout on the bench, watch what happens when they get in. They’re not ready to play, give those two kids credit for being ready to play.”

After just 10 turnovers at CSUF and 12 against CSUN, the Gauchos continued their consistency when handling the ball with just 13 turnovers, one less than UCD’s 14 on Thursday. It is the third consecutive game in which UCSB has registered less turnovers than its opponent.

UCSB will travel to UC Riverside this Saturday, Jan. 23 to face the Highlanders at 7 p.m. in the SRC Arena.