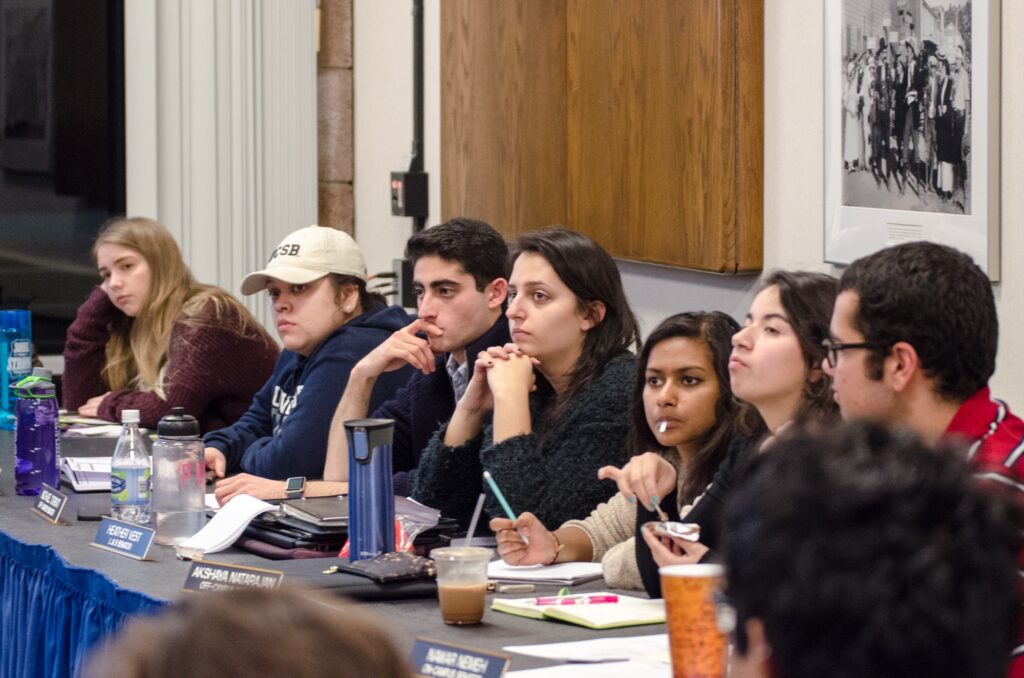 In addition to discussion of threats to free speech at the University, two senators submitted letters of resignation. Alex Nagase / Daily Nexus

Jason Garshfield, fourth-year political science major, introduced the issue saying, “This right of free expression is under threat at UCSB.” Garshfield presented an article from the Foundation for Individual Rights in Education (F.I.R.E.) which gave UCSB at a “red light” rating regarding freedom of speech and expression at the University. According to F.I.R.E., a red light university has at least one policy that both clearly and substantially restricts freedom of speech.

According to Garshfield, UCSB’s recent implementation of a “Bias Response Team” poses a threat to students by limiting speech which is labeled as offensive.

Garshfield proposed drafting a resolution in support of free speech to respond to F.I.R.E.’s rating and improve student freedoms.

“Free speech is not a point of pride right now. It is a point of shame, and we should all be ashamed at how our university has completely ignored the perfectly legitimate concerns of a perfectly legitimate civil rights organization,” Garshfield said. “Making bigotry something that cannot be expressed does not make it go away… it makes it a black market good.”

During the question portion of Garshfield’s presentation, Senator Jerel Constantino addressed the senate asking whether Garshfield was a member of the “White Student Union” Facebook group. Garshfield responded to the point saying, “I’m a Jew, but it’s good to know that suddenly I’m a white supremacist.”

“The freedom to speak is clear, it’s not up to interpretation. With that being said, the definition of what’s racist is up to interpretation as well,” Morse said. “I’ve been told that as a straight, white male I can not experience racism, but that does not mean on an individual level, you cannot be disparaged.”

“I may not agree with anything or everything that one of you says but I will certainly fight to the death to protect your right to do so,” Morse said.

In response to Morse, Senator Akshaya Natarajan suggested the current university policy exists to aid marginalized groups who may be educationally restricted by microaggressions and offensive speech.

“I fear that our culture has forgotten, or chosen to forget in whole, or in part, how fortunate it is to have such protections … for what they protect us from is much more frightening than that which they expose us to,” Dimpfl said.

“Being at this table, you have an extreme amount of power. I don’t know how many of you know it, but you have the power to alleviate the struggles of human beings. That is an amazing power.” Nemeh said. “I please ask you to weigh every single vote before you make it, to weigh it seriously in your heads as to how it will affect every student on this campus and every community out there.”

Nemeh said he was leaving due to personal reasons.

“I’m resigning, mostly for personal reasons. I thought I owed you all I guess an explanation as to that I want to refocus on my academics, I want to refocus on research that I’ve been doing,” Nemeh said. “I have an internship that I have been neglecting at the U.S. State Department that I need to be putting more time and effort in and I really do want to look more after my family.”

Abdalmalik did not disclose the reason of his resignation, but also had a brief parting in his letter of resignation, read during the public forum portion of senate.

The resignations were passed in a Senate vote of 15-4-3.

“A Bill to Restructure the A.S. Fellowship Program” and “A Bill to Amend Article VI of the Constitution & By-Laws to Incorporate a Transfer Senator” were sent to campus affairs while “A Resolution to Ensure Continuity Within the STV Implementation Committee” was sent to immediate consideration and passed the same night.

A version of this story appeared on page 5 of the Thursday, January 21, 2016 print edition of the Daily Nexus.

Jason, I’m finding myself increasingly impressed by you. I know this article only gives us a small portion of what you said at the forum, but I’m guessing that any egregious comments made would have been joyfully published here. I think you’re learning how to speak to your audience in a way that will make them more likely to listen to you, even if they still feel the need to attack you afterwards. And more importantly, it’s obvious that you’ve been listening to the people that you disagree with even though they never offer you the same courtesy. I’ve heard… Read more »

Thank you; your words are much appreciated. We’ve still got some work to do if we want to pass this resolution, and I hope you (and any other interested community members) come out and support us at the next Senate meeting.

The Thought Police continue their onslaught. People are free to be as biased as they wish and to speak as publicly as they wish. It’s called free speech. UCSB is delving into an area that may land them in court for violating students’ constitutional rights. FIRE, the group that Jason mentioned at the Senate meeting, wants to take on the UC or CSU speech policies legally to have them tossed. Tred carefully folks lest the courts intervene in this nonsense.

Jason G
Reply to  Amused Not

Hopefully, we can change the system from within before there’s any need for a legal intervention.

Freedom of speech is the most important right an American has. The Freedom to defend our freedom of speech is the next on the Most Important List.
If I say something you don’t like and you try to hurt me because of what I say, I will shoot you with my AR -15 Defense Rifle. This is the big picture in America today.

As long as you don’t feel hurt by mere words, otherwise you are just like them, personally i would argue even worse than them, but that’s just me? do you feel like shooting me now? i hope not.

Amused Not
Reply to  Anonymous

Unfortunately there’s a lot of anger towards university faculty and students from people who find “micro aggressions” and the other stuff the social justice warriors spout offensive. That’s one of the many reasons Trump is so popular-he’s tapping into a rage almost 50 percent of Americans seemingly share. ArmedCitizen personifies this anger. I can’t stand Trump and think he’d be a horrible President, but I find myself nodding in agreement with some of the things he says. Lots of Americans are like me.