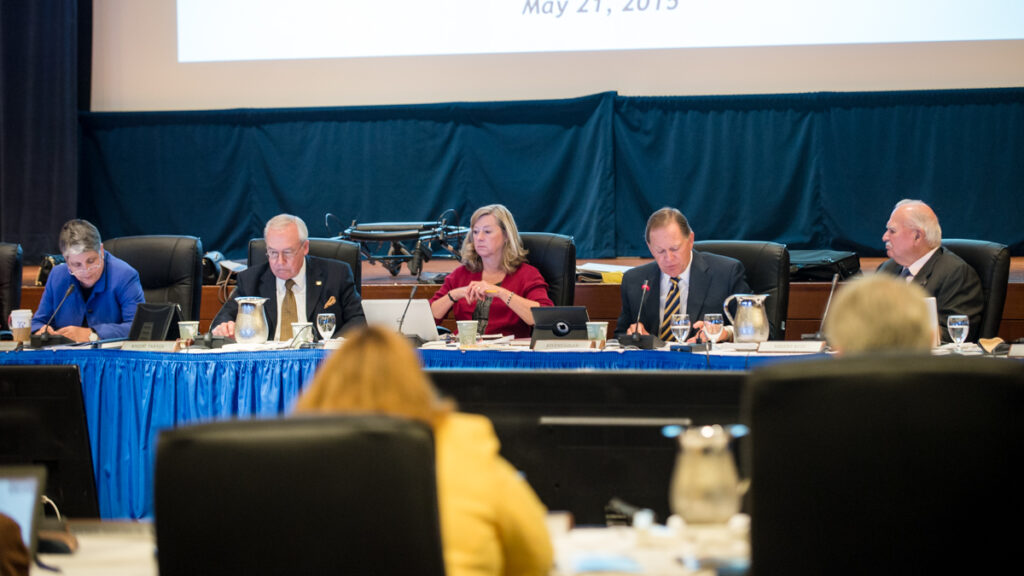 The UC Board of Regents convened Thursday morning at UCSF’s Mission Bay campus for the second day of their January meeting.

The regents discussed and approved Student Regent Avi Oved’s proposal to establish a new non-voting student position on the Board — the student regent advisor — on a trial basis for the next two years. The board also heard a report on UC’s involvement with the European Organization for Nuclear Research (CERN) and its Large Hadron Collider and received an update on the progress of cross-campus waste and energy-saving programs.

Oved said the student regent advisor position will help ensure UC students from all education levels are represented at the Board.

Oved said many student organizations throughout UC have endorsed the proposal.

“Across the entire UC system we have had nearly 16-plus resolutions representing undergraduate and graduate student associations that have unanimously endorsed this proposal,” Oved said. “In addition, we have received endorsements from the UC Students Association and the Council of Presidents and we have recorded testimonies from previous student regents.”

Staff Advisor Deidre Acker spoke in support of the new position, which she said would play a similar role to her own.

“I think that Regent Oved is modeling this student advisor position after the staff advisor position, and many of you may not know exactly what it is that we do, but I think the staff over the years have shown that we can give our perspective as staff throughout the entire UC system and that the Regents can make a more informed decision because we are sitting on the Board,” Acker said.

“I think having student perspective in all our discussions really helps inform our thinking and, therefore, the decisions we end up making,” Reiss said.

The Board passed the proposal unanimously.

Oved said the new position will help foster trust and cooperation between Regents and student representatives.

“I think that this step forward from the Regents is a step in good faith that I think will instill the confidence that students have in this Board and the Regents, which I think the Regents deserve,” Oved said.

Professors of physics Joe Incandela of UCSB and Beate Heinemann of UC Berkeley presented to the Regents on UC researchers and their involvement with CERN and the Large Hadron Collider (LHC) in Switzerland.

Incandela began by summarizing what particle physics is and how the LHC can be used to gather data that may further explain the nature of physics and the universe.

“To frame what we do, although it is very technical, deep down we are trying to answer some very big and very basic questions: What is the universe? How did it begin? What’s it made of? How will it evolve, and what are the fundamental building blocks and forces of the universe?” Incandela said.

The LHC allows researchers to simulate conditions that may lead to increased knowledge that could lead to answers for these essential questions, according to Incandela.

“We accelerate and collide particles in order to discover and create new ones from the collision energy,” Incandela said. “The LHC actually sort of takes us back in time because it takes us to high enough energies that we are looking at what the universe was like at 45 million billion degrees, and that’s how things were about one trillionth of a second after the Big Bang.”

“Approximately 10 percent of U.S. users are from UC and eight of the 10 UC universities are strongly involved in the program, as well as additional labs managed by UC. The current number of scientists involved [from the UC] is 176, of whom 34 are faculty members or senior scientists,” Heinemann said. “Since the beginning of the LHC in 2009, 135 Ph.D. students have been involved and approximately 300 undergraduates.”

Regent Fred Ruiz said UC should strive to inform the public about research like Incandela and Heinemann’s.

“This is such a huge project and it impacts the state, the nation, the world, so if we can figure out how to take projects like this that we are involved in and figure out how to educate the public, but do it in a way they can understand it,” Ruiz said. “If we could figure out how to monetize the value to every individual that benefits from this kind of thing … We have to educate people, Californians, about how important we are. I don’t think people understand what we offer this state and the world and the country.”

Committee on Grounds and Buildings

David Phillips, UC Vice President of Energy and Sustainability, gave a presentation calling on the Board to approve funding to continue the UC’s Statewide Energy Partnership Program through 2025. Phillips explained that UC campuses are reducing greenhouse emissions and saving money through the program.

According to Phillips, the Partnership Program has greatly reduced UC energy consumption levels and expenses in the 11 years since its inception.

“As a system, as one metric, we have cut our net electricity use by about a third thanks to these programs. Decreasing electricity use of course cuts our greenhouse gas emissions as well, and this is by far the easiest way for us to meet our 2025 carbon neutrality goal. Today the program has reduced our greenhouse gas emissions by about 16 percent,” Phillips said. “We are now saving about $28 million a year on our utility bills and cumulatively we have saved some $166 million.”

“I think these activities combine so much about what a public university ought to be about.”

The Board approved funding for the program.