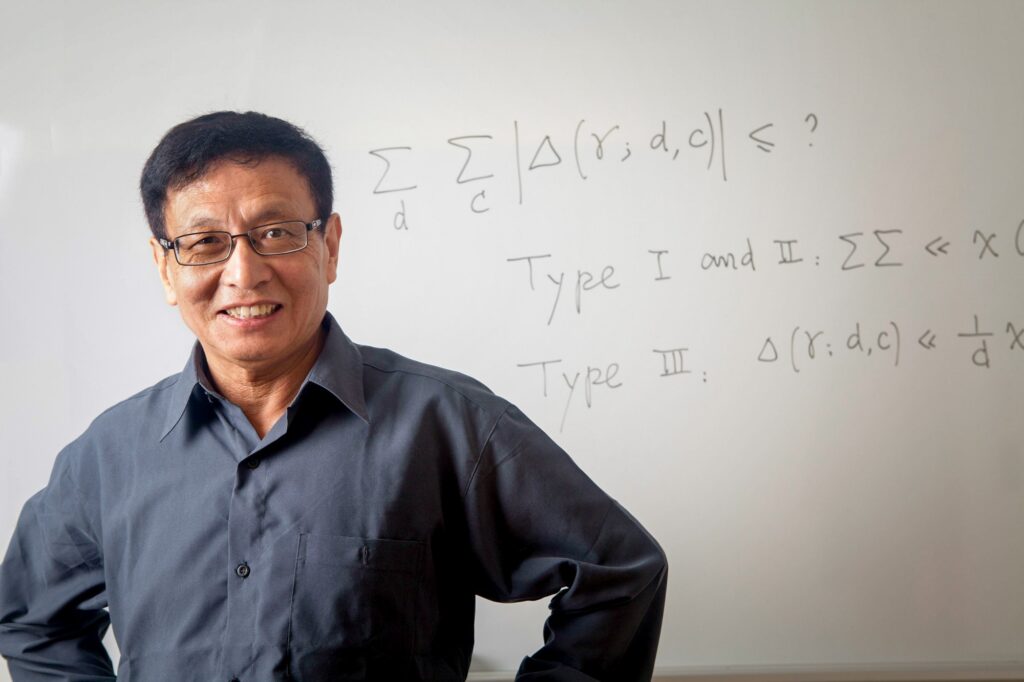 Mathematics 266HH: Analytic Number Theory is likely one of the most overcrowded courses at UC Santa Barbara this quarter.

The graduate seminar meets in a small classroom in the Humanities and Social Sciences Building and is intended for a maximum of 25 students. Yet, even as the university heads into its third week of the Winter Quarter, there are not enough chairs in the room for all of the fascinated students.

While Analytic Number Theory may not be what attracts these students, the professor, Dr. Yitang Zhang, does.

“He’s probably, at this point, one of the most famous mathematicians in the world,” Jeffrey Stopple, UCSB mathematics professor, told the Nexus when Zhang was hired in September. “I think there might be only maybe two or three others alive that have his level of celebrity.”

Zhang gained fame amongst mathematicians in 2013 after submitting a proof to the Annals of Mathematics, establishing the first finite bound on gaps between twin prime numbers and thus solving the Twin Prime Conjecture, a 150-year-old math problem. At the time, he was working as a part-time calculus teacher at the University of New Hampshire and gained instant recognition, winning a MacArthur Award in 2014, and was promoted to full professorship.

Zhang’s accomplishment also made its way to the silver screen. The New York Times reported Zhang’s breakthrough a month after his submission, and filmmaker George Csicsery made Zhang the subject of 2015 documentary “Counting from Infinity.”

Garo Sarajian, a mathematics graduate student at UCSB, said he noticed that people outside of the math world were beginning to recognize Zhang’s name.

Sarajian said he struck up a conversation with a “random economics student” next to him on the bus, and was surprised that he had already heard of Zhang.

“Of course I know [Zhang] is a big deal, but I had no idea how big of a deal he was outside the department,” Sarajian said.

“The department did not ask me to teach so much, but I will at times,” Zhang said. “It’s more research time.”

Zhang said he decided to accept an offer from Chancellor Henry T. Yang in the summer after he was recommended by Harvard University mathematics professor Shing-Tung Yau.

“I got an email from Professor Yau and, very quickly, I said, ‘Yes I would like to do that,’” Zhang said.

Zhang remarks that the “feeling” and environment in Santa Barbara is “very different” from New Hampshire. He said he especially enjoys the view of the Santa Ynez Mountains from his office on the sixth floor of South Hall.

“On a sunny day, you can see the mountain very clearly,” Zhang said. “I really love it here. I will use the good environment to try to do something more.”

When he is not teaching or researching, Zhang walks around campus and on the beach. Sarajian said Zhang will strike up small conversations with many of the people he passes.

“He’s very friendly and very approachable,” Sarajian said. “If you didn’t know who he is, you’d think he’s just another very friendly professor.”

Sarajian, who attends Zhang’s Analytic Number Theory seminar, said Zhang possesses a remarkable ability to engage with his students, whether it be frequently joking with the class or providing insight.

“He’s not only good at teaching but also at getting [students] excited about what he’s teaching as well,” Sarajian said. “When someone in his position is able to do that, it’s a big deal.”

“However great his achievements, he is a remarkably humble man, and in his Analytic Number Theory course this quarter, he is a very expressive and energetic professor,” Brody said in an email.

Chancellor Yang said having an “exceptionally dedicated” teacher and mathematician like Zhang on campus boosts the university’s status.

“His renowned research and scholarship elevate the proud reputation of our university, and now that he is here in the classroom, our students and their education will directly benefit from his brilliance,” Yang said in an email.

Sarajian said he thinks Zhang’s presence will add prestige to the university and attract more students to the program.

“The school has a celebrity professor we can brag about,” Sarajian said. “It’s amazing how one person does make a difference.”

Zhang said he hopes to stay at UCSB until his eventual retirement.

Despite all of his achievements, Zhang said he does not believe he has yet reached the pinnacle of his career.

A version of this story appeared on page 1 of the Thursday, January 21, 2016 print edition of the Daily Nexus.