This past weekend, the No. 54 UCSB men’s tennis team made its first road trip of the season. After facing No. 63 Washington, No. 12 Texas and No. 49 Oregon, the Gauchos concluded their road trip with a 1-2 record to start the season. 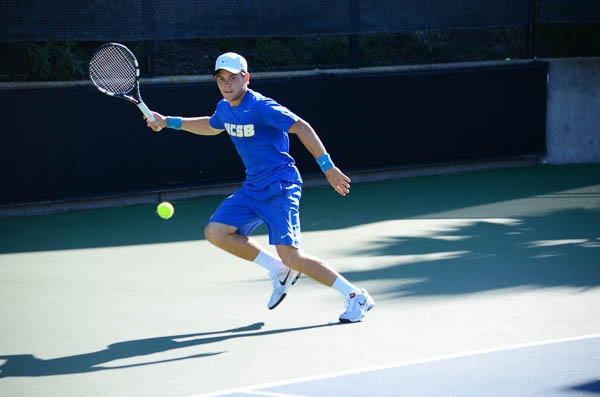 Santa Barbara started the season off strong, taking a win in Seattle, Washington vs. the No. 63 Huskies by a score of 4-3 on Friday afternoon.

“It was a great win for the Gauchos,” senior Nathan Eshmade said. “We’ve been preparing all offseason to get started.”

The day started with the Gauchos sealing the doubles point to give them an early 1-0 lead. On court three, freshman Anders Holm and sophomore Chase Masciorini took a 7-5 win.  With the Huskies winning on court two, the doubles competition came down to Eshmade and senior Miles Seeman.

On court one, the senior duo found itself in trouble as Washington served with just one game needed for the win, but the Gauchos battled back to force a 6-6 tiebreaker. Santa Barbara emerged victorious pulling out an 8-6 victory in the break to give the team a 7-6 win and a head start going into singles play.

Despite trailing 1-0, the Huskies opened up the singles portion of the match taking straight set wins on courts one and four to regain the lead 2-1. The Gauchos would answer with two wins of their own from two freshman competing in their first collegiate dual match.

On court six, Holm took down his opponent in straight sets of 6-4, 6-2 to ice the overall score at 2-2 for both teams. His teammate, freshman Oliver Sec, helped Santa Barbara regain the lead with a victory in three sets. Sec stole the first set convincingly, but fell in the second by the same score of 6-1. He capped off the match with an identical win in the deciding third set, giving him a total score of 6-1, 1-6, 6-1. The Gauchos went up 3-2 only needing one more victory for the overall win.

Still, Washington would not shy away from the competition as the team picked up a win at court three, leaving the match in the hands of Eshmade on court two for the Gauchos. The senior was in a tough spot as he faced No. 122 junior Gal Hakak and dropped the first set 6-2. Hakak held the match in his hand, serving with just one more game needed to win, but Eshmade would again rise and force a tiebreaker in the set and go on to take it 7-6 (7). In the final set, as his teammates gathered around to cheer on Eshmade, the Gaucho veteran glided to a 6-1 victory and a walk-off win for the Gauchos. His 2-6, 7-6 (7), 6-1 win gave the Gauchos the match by a score of 4-3 over the hosting Huskies.

“It was a tough match for me, but I was able to find my rhythm after the first set,” Eshmade explained. “I really focused in and we were able to pull out the win.”

Santa Barbara would move on to play No. 12 Texas the next day in the same neutral Washington location. The Longhorns did not show any lack of confidence as they took down the Gauchos 6-1.

Although Santa Barbara lost the doubles point to start the day, the duo of Eshamde and Seemann was able to pull out another victory on court one to stay undefeated on the year at 7-0 dating back to the team’s offseason tournament play.

The two seniors defeated the team of senior Michael Reichmann and sophomore Adrian Ortiz by a score of 6-4.

On the singles side, Holm was the sole Gaucho to pick up a win on the day. Playing on court six, the freshman took a win over freshman Julian Zlobinsky in three sets to give him his second-straight singles win on the season. After dropping the first set, Holm won the next two straight to give him an overall win of 2-6, 6-1, 7-6 (8-6).

After falling 6-1 to the highly ranked Longhorns, the Gauchos traveled south to Eugene, Oregon to face No. 49 Oregon. The Ducks came out on top in dominant fashion, sweeping Santa Barbara 7-0.

The sole victory for the Gauchos came on court three in doubles play where the new duo of freshman Nicolas Moreno de Alboran and Masciorini took a 7-5 win over Oregon’s Cormac Clissold and Thomas Laurent.

A few Gauchos made it a competition in singles play, forcing a couple of third sets on courts five and six, but the Ducks swept the field winning all six singles matches. Oregon walked away with a complete 7-0 victory.

With this first road trip in the books, the Gauchos look ahead to this weekend’s events in Athens, Georgia where they will compete in the NCAA National Indoor Championships. Santa Barbara will face the host of the championships in No. 7 Georgia in the first round on Saturday, Jan. 23 at 10 a.m.