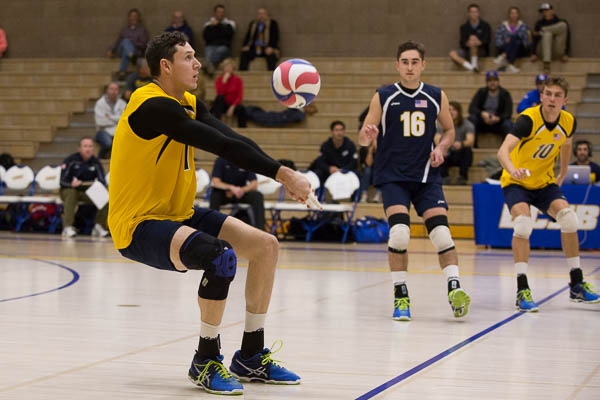 A week after finishing the Asics Invitational a perfect 3-0, the No. 13 USCB men’s volleyball team traveled south to play its first two games of the MPSF season. The weekend matches featured a 3-0 win over UCSD and a tough 3-1 loss to No. 4 UC Irvine.

Santa Barbara now moves to a mark of 5-2 overall and 1-1 in conference. After losing their conference opener to the Gauchos, the Tritons ended the weekend at 1-3 overall, 0-2 MPSF. The Anteaters dropped a game as well, currently sitting at 2-2 overall, 1-1 MPSF.

The Gauchos dispatched the Tritons on Friday night, and although the games were all fairly close (30-28, 25-22, 25-10), the visitors made quick work of their conference opener, winning in straight sets.

In their second game of the weekend, the Gauchos struggled to slow down Irvine sophomore Tamir Hershko, who put in a comprehensive display on both offense and defense. The Anteater’s leading hitter notched 19 kills and 12 digs, pairing up with setter Michael Saeta to lift their team over the Gauchos in the rivalry game.

Although the Gauchos were unable to complete a late comeback against Irvine, Delson and co. were able to recover from an early deficit the night before against UCSD after trailing 23-19 in the first set.

“San Diego is a tough young team,” said Gauchos assistant coach Cullen Irons. “[Kevin Ring] is a great coach, and he gave their team a great chance to get the win. But our guys came from behind to win the first set and closed out the next two pretty handily.

The Tritons relied heavily on their underclassmen, playing four sophomores and a freshman in all three sets. The more experienced Gaucho roster made quick work of the young squad, led by Delson and opposite Matt Marsh, who each registered 12 and 10 kills respectively.

Saturday night, UCSB’s five-game win streak was ended by reigning MPSF champs Irvine. The matchup was the Gauchos’ third game against top-10 teams early on in their grueling schedule.

“They scouted us really well,” opposite Jacob Delson said. “It was really tough to put a ball away against them because it felt like their block was digging everything. They passed really well against our serves and they did a good job while we didn’t have a lot of fight in us.

“I didn’t play that well and we regrouped a little too late in the third. It’s tough when that happens,” Delson said.

Irons credited the loss to an overall lapse in energy from his team, rather than any individual player, though.

“Coming off of a win, it’s hard to maintain that focus and that ‘do whatever it takes’ mentality. I just think the guys got a little too relaxed,” he said.

The assistant coach also said the coaching staff would be putting more emphasis on blocking and serving following the Irvine loss in preparation for next weekend’s upcoming games at USC and Cal Baptist.