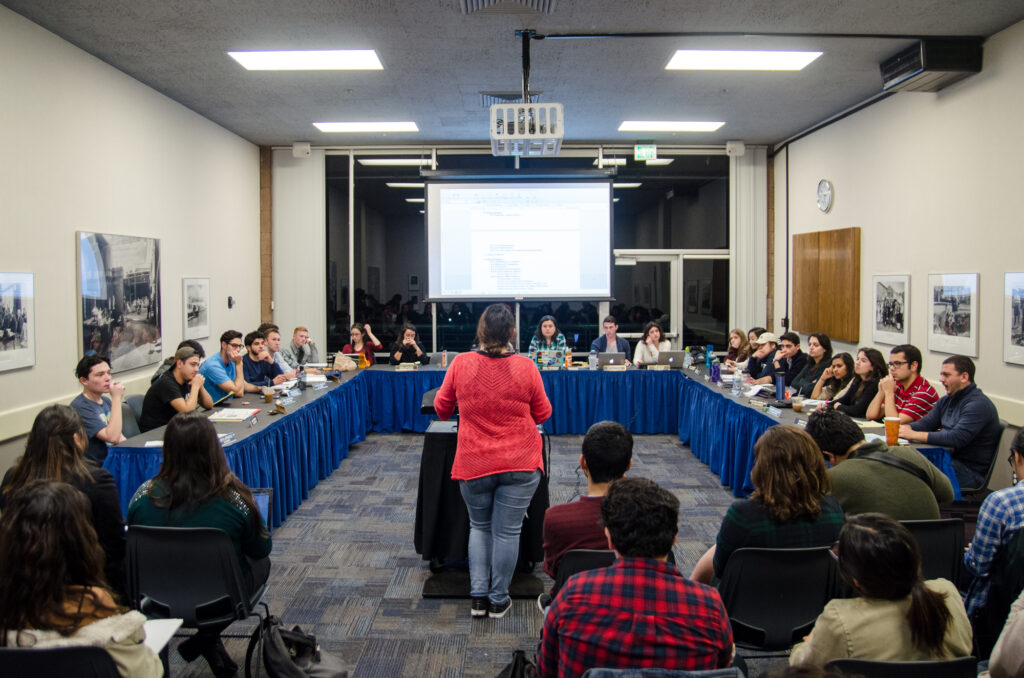 The Associated Students (A.S.) Senate met Wednesday to discuss a bill amending the legal code of an Office of Student Advocacy bill and a resolution asking for “immediate” action in support of those without legal status.

The first proposal, “A Resolution Requesting Immediate Action in Support of the Undocumented Community,” was partially written by Improving Dreams, Equality, Access and Success (I.D.E.A.S.), a group advocating for the rights of undocumented immigrants at UCSB. The resolution urged A.S. to form a temporary committee to work with I.D.E.A.S. and to increase access to Counseling and Psychological Services for undocumented students. The resolution was written in response to recent Immigration and Custom Enforcement (I.C.E.) raids in California and the expected presence of Customs and Border Patrol recruiters at the Winter Career Fair.

Abby Salazar, a student sponsor of the bill and fourth-year Chican@ studies and black studies double major, said she had opened the door of her home to I.C.E. officers, not knowing “that action would change the rest of my life.”

“They immediately handcuffed my mom and sat me down,” Salazar said. “They took her away and I went into a state of panic. It’s been six years that my mom hasn’t been able to return to her home that my parents have worked for after so many years.”

Salazar said many undocumented students are currently living in fear after news of the I.C.E. raids and deportations.

“When customs and border patrol comes to the career fair, C.A.P.S. should be on hand with more psychologists and therapists,” Islas said. “That way, students who do feel triggered have the ability and the means to contact someone in C.A.P.S. who are able to help them.”

Islas said she collaborated with A.S. senators Alejandra Melgoza and Jose Magana, who proposed that she write a resolution.

Alejandra Melgoza, an off-campus senator and third-year Chican@ studies major, said she supports the resolution because of the stress and pressure undocumented students have to face while pursuing their education.

“There have been a lot of raids in our community,” Melgoza said. “There are articles that state they are continuing in Santa Barbara county, so this presents a lot of mental health stress not only on these students here in this community, but they also worry about their families back home, friends, community members.”

In the fall of 2013, the 64th A.S Senate voted against passing “A Resolution in Support of Undocumented Student and Immigrant Communities,” which requested A.S. express no confidence toward former Secretary of Homeland Security Janet Napolitano, who is now president of the University of California.

Salazar said it is important for Senate to repair its relationship with the undocumented student population at UCSB in order to fully represent the student body.

Two years after, A.S. Senate voted down the previous resolution, Salazar said, “Now we’re back in the same place. We’re coming here for the 66th Senate to amend those actions and to really support undocumented students right now because undocumented students are facing really difficult times.”

“A Bill to Amend Lobby Corps Legal Code” and “A Bill to Update CFF By-Laws” were sent to Campus Affairs. “A Bill to Amend the Legal Code of the OSA Bill” and “A Resolution Requesting Immediate Action in Support of the Undocumented Community” were passed unanimously.

[Correction: This story originally read  “a resolution asking for ‘immediate’ action in support of those who immigrated to the country illegally.” The wording was changed to “those without legal status” to more accurately describe the purpose of the resolution.]

As a body that is supposed to support the rule of law, the Senate should be ashamed of itself for passing this resolution. People who are in this country illegally who get caught and don’t qualify for legal relief should be deported. That’s the law. Unfortunately this country is no longer governed by the rule of law but the rule of man, and so the open borders movement takes us one step closer to dictatorship according to Glenn Greenwald.

To “Amused Not”, As an AS senator, I believe that it is our duty to make statements like this. Laws are dynamic and are meant to adapt to a changing society. Current immigration laws are largely based on racist policies that are entirely discriminatory. They do not apply to all undocumented immigrants and disproportionaltely impact people of color. Also, I hope you may educate yourself on the history of the Southwest, and recognize that we live in occupied land. As the nation that is the self-proclaimed “leader of the free world,” isn’t it our duty to welcome those who are… Read more »

You don’t know what that word means.

I believe that the students that addressed AS Senate are brave because they are advocating and fighting for the rights of underrepresented people who have recently experienced an even harsher crackdown from ICE, so yes. To ME, they are brave – and I have so much respect for them. Deportation doesn’t just affect undocumented people, it affects everyone. Those looking to seek refuge, families, workers, friends, and more are impacted by these laws and processes. Senate has failed the undocumented community before, but I will try my best – so long as I’m in office – to represent and work… Read more »

Thank you to IDEAS and AS Senate for protecting the undocumented students at UCSB. The daily struggles they face in pursuit of higher education and better lives for themselves and their families seems insurmountable. It is the UC’s duty to protect them. After all, if the UC is willing to take undocumented students’ tuition money, they should represent their best interests just like they would to documented students. Thank you for doing the right thing. And thank you, proud senator, for being a voice for this underrepresented student population.

That’s the point. The UC shouldn’t be admitting undocumented students. Instead, administration should be encouraging them to return to their country of origin. If you’re not legally here, you shouldn’t be working, going to school or receiving public assistance.

Orgullo Undocumentado
Reply to  Amused Not

People here who come to this country illegally do it in a search for a better life. It is rather difficult to live in their native country for various reasons, they don’t come here to take anything from anyone. They come here to work and improve their lives and the lives of their family. I am proud of the bravery and hard work of undocumented students. They deserve to be there just as much as someone else who worked hard to get into this or any other University.

Amused Not
Reply to  Orgullo Undocumentado

Doesn’t matter why they came. If they’re here ILLEGALLY and don’t qualify for legal relief, and get caught, they should be deported. Pure and simple. The problem is everyone is ignoring the rule of law, and the only place that leads to is a dictatorship. If the likes of Trump wins the presidency, anyone who’s here illegally is going to be rounded up, and Trump isn’t going to worry about legal niceties – he’ll do it by executive order.

To my dear community I support you.
I am in solidarity with Undocumented students.
I will not stand with this form of xenophobia.