The Daily Nexus
Volleyball
No. 4 UCSB Prepared for First Two MPSF Clashes
January 14, 2016 at 5:04 am by Ryan Burns 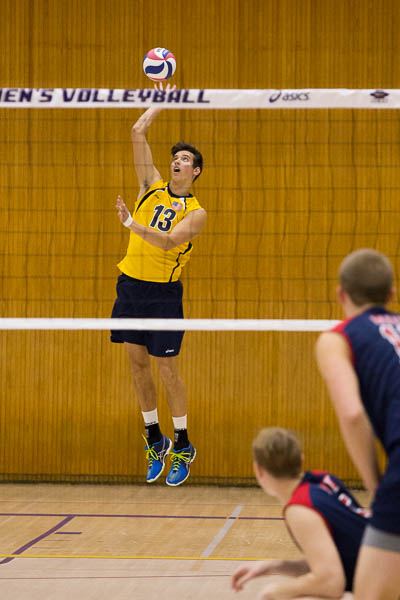 This weekend, the No. 8 UCSB men’s volleyball team faces back-to-back games against UC San Diego and longtime rival No. 4 UC Irvine in its first two games of the MPSF season. After finishing the 2015 regular season in sixth place in the MPSF (17-10 overall, 13-9 conference), the Gauchos are preparing for a run at the league’s giants come the end of the year.

The Gauchos are fresh off a solid weekend performance at the UCSB Asics Invitational.
“We want to carry over our momentum from the past four games,” senior setter Jonah Seif said. “We need to keep playing together as a team, to be as consistent as possible and not have so many ups and downs.”

After struggling to find their footing in the tournament opener against Quincy, dropping a pair of sets after jumping out to a 2-0 lead, the Gauchos went on to win the remaining seven sets to secure a perfect 3-0 on the weekend. In the narrow win over Quincy, redshirt freshman duo Connor Drake and Henri Cherry made their claims for more playing time with their game-changing performances.

“It’s tough coming in for your first couple games and I thought they responded great,” Seif said. “Both of them put up big numbers on Friday. They did what we needed from them, and we aren’t bearing the whole load on them, but they are great role players.”

As regular starting middle blocker Ryan Hardy returns from an ankle injury the freshmen may lose a chunk of their playing time, but their performances will add depth in the middle as the long conference schedule looms.

Hardy returned to practice this week and is looking to make his way back into the lineup in time for the weekend clashes. The redshirt senior finished last season eleventh in the nation in blocks per set with 1.18.

Hardy’s return will welcome back the team’s best blocker and a major offensive threat into the starting lineup against a potent UCI squad. The Anteaters ended last year ranked third in the nation and won the MPSF with a 19-3 record in conference play, including a pair of wins against UCSB.

“[Irvine] plays a bunch of lineups in preseason so it’s tough to know who will be out there, but I think we match up against every team,” Seif said. “We have a big team and a lot of experience, so I think we’ll match up fine.”

The Gauchos’ other opponent this weekend, UC San Diego, struggled to compete with the other teams in the loaded conference. Santa Barbara will look to continue its five-game win streak against the Tritons. UCSB has won in straight sets in every match during that streak.

Following a successful preseason featuring an impressive 3-1 dispatching of perennial national championship contender Loyola (Ill.) as well as a perfect record at the Gauchos’ annual invitational, Santa Barbara will look to continue these types of performances against MPSF sides, beginning this weekend.