The Daily Nexus
Sports
Gauchos’ Prepare for First Road Trip of Conference Schedule, Face CSUF and CSUN
January 14, 2016 at 5:06 am by Sean White

On the road for its first pair of away conference games of the season, the UCSB women’s basketball team hopes to rid its winless streak of 0-8 when playing away from the Thunderdome. It will face Cal State Fullerton on Thursday and will end its week at Cal State Northridge on Saturday.

“On the road you have to be 10 points better than the other guy,” Head Coach Bonnie Henrickson said. “Most teams will tell you, you start the game down 10. I think for us, it’s how well you have to play when on the road, we have to do the little things on the road.” 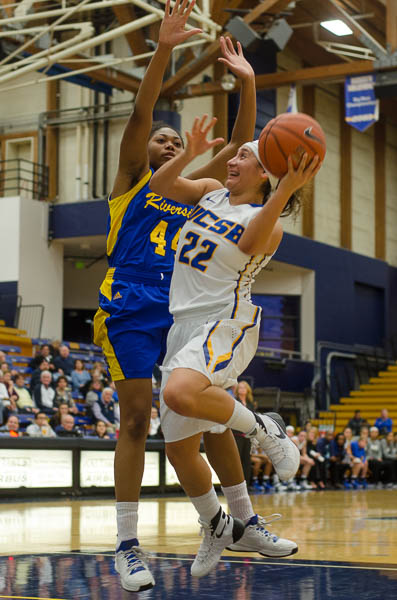 Starting conference play with a stirring victory over Blue-Green rival Cal Poly last Thursday, the Gauchos faltered in their next contest with a 30-point loss to UC Riverside and are now 4-12, 1-1 in the Big West. CSUF currently owns an overall record of 2-13, 0-1 after a loss to Long Beach State in its conference opener. The tale is similar for CSUN who is also 2-13, 0-1 after a conferencing opening loss to UC Davis.

With the Big West schedule beginning last week, the transition into conference play offers an opportunity for teams that may have struggled during non-conference play to uplift their seasons. All below the .500 mark, it is assured that each team has its sight set on a possible ‘Cinderella’ story to close out the season.

“We don’t value who they [CSUF & CSUN] are based off their win-loss record,” Henrickson said. “Especially, look at Fullerton, they beat LMU, were in a six-point game with Pepperdine and went into overtime with Wyoming. I would hope we are mature enough to recognize that a record isn’t indicative [of our season].

Certainly, a team’s overall record isn’t always indicative of its performance on the court. UCSB proved this last season, earning its first win of the season against the Titans after a 0-24, 0-11 start. Still in the process of developing into a team that can collectively play a full four quarters, Santa Barbra’s matchups this week will simply come down to more than just who can score and defend.

It will come down to the miscellaneous fundamentals of the game. Particularly, the Gauchos’ ability to protect the ball and not turn it over. Overall, UCSB averages 21.9 turnovers per game, but have turned it over by an average of 26 times per game since the start of conference play. In six consecutive games, it has recorded 20 or more turnovers. The blame for the Gauchos’ miscues can only be placed upon themselves as they have constantly committed traveling violations.

“We just made really bad decisions and now we’ve thrown traveling into it,” Henrickson said. “They’re your feet, control your feet. But, that’s discipline and focus on attention to detail.”

However, UCSB is not the only team affected by the error of turnovers as Fullerton finished with a season-high 27 turnovers in its conference opener.

The loss of four senior players, three of which were starters, leaves CSUF with a young team of primarily underclassmen. A total of five freshmen are listed on the Titans’ roster while it has just one redshirt senior.

While the loss of All-Big West First Teamer guard Chante Miles, who averaged 19.4 points per game, the emergence of freshman combo guard/forward Michelle Berry gives Fullerton something to rejoice about now and for the future.

She made an emphatic start to her collegiate career with a 38-point performance in the Titans’ season opening victory versus Portland State. It was a monumental outing as Berry’s point total serves as the most by a freshman in program history, prompting her to become the first freshman to earn Big West Athlete of the Week honors as well.

Complementing Berry’s scoring efforts is the Titan’s three-point shooting ability. On average, Fullerton attempts a total of 22.3 shots from deep, producing its 30.4 three-point percentage. It currently leads the Big West in total threes made with 102. Despite LBSU setting a Big West single-game record against them with 20 three-point field goals, the Titans nearly matched the 49ers feat with a season-high 13 three-point makes of their own.

The sharpshooting of freshman guard Dani Craig from beyond the arc is a pivotal asset to Fullerton’s success from the perimeter. She ranks second in the Big West in total three-pointers made with 35 and is fifth in three-point percentage at 36.8.

On average, Santa Barbara holds opponents to 30.5 percent shooting from behind the three-point line. With the Gauchos being undersized in the paint, opponents usually base their offensive game in the paint. Certainly, Fullerton will take three-point shot attempts, but it will be interesting to see how much the Titans feed the post.

Continuing UCSB’s pair of road games is its matchup at Cal State Northridge on Saturday.

The Matadors’ resurgence over the last two years has been outstanding as the reigning Big West champions have won the conference tournament for the last two consecutive years, winning its first regular season title in program history in the 2013-14 season.

After setting a program record with 23 wins last season (23-11, 11-5), CSUN’s sudden decline has been a shock to many. Yet, its current 2-13, 0-1 record is justified by its loss of five seniors, four of which were in its starting lineup just last season. The replacement of the 2013 Big West Player of the Year and All-Big West First Teamer guard Ashlee Guay along with All-Big West Honorable Mentions Cinnamon Lister and Janae Sharpe has been difficult.

Yet, the upside of sophomore forward Tessa Boagni has been a spark within the Matadors’ slow start to the season. An All-Big West Freshman Team selection last year, Boagni leads CSUN in scoring with 12.4 points per game.

While Boagni has embraced a bigger role on offense, the team as a collective unit has played poorly on defense. CSUN has been outscored by opponents by a point differential of 19.9 ppg this season while allowing 79.9 ppg.

Prior to its loss to UC Riverside last Saturday, UCSB had been averaging 86.6 ppg during its three-game winning streak. In spite of a great start to their last game, the Gauchos must remain committed to their style of play on offense and not allow the tempo of their opponent decide their playing style.

UCSB’s matchup against Cal State Fullerton will begin at 7 p.m. in Titan Gym. It will face Cal State Northridge on Sunday at 4 p.m. in the Matadome.