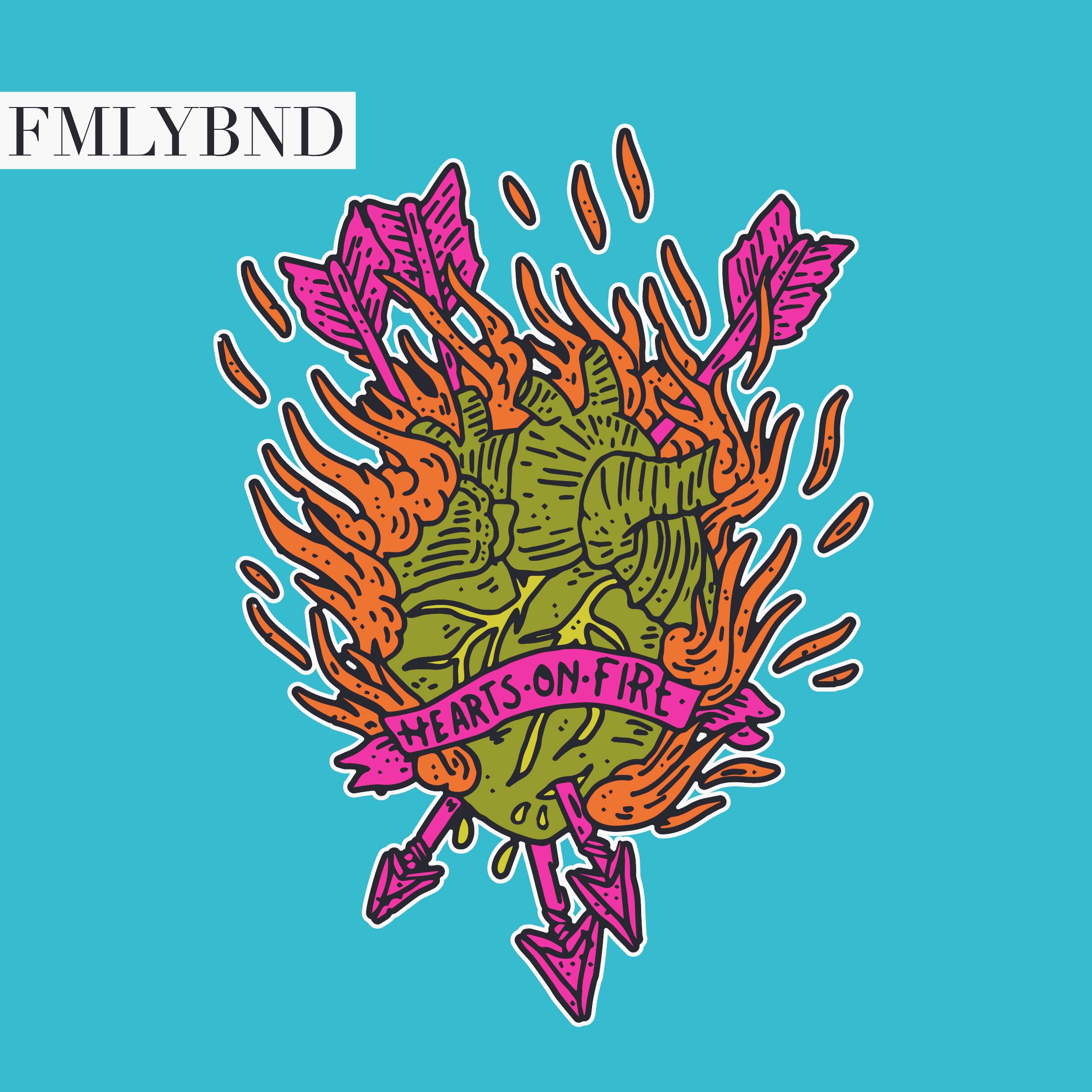 This Friday, FMLYBND is set to release their highly anticipated new EP, Hearts on Fire.

In their first bulk release since 2014’s Back to Life, Isla Vista’s own FMLYBND continues to bust genres. Sometimes light, airy and relaxed, sometimes synth-driven, electric and hard-hitting, FMLYBND refuses to be labeled rock, indie or pop, choosing instead to jam themselves into a category of their own somewhere in the middle.

FMLYBND singer and lead guitarist Mac Montgomery explains that the main label he associates with this EP is “Party Music.”

“The fact that we’re a band from I.V. is always in the back of my head writing,” Montgomery said. “Would we be able to play this at a house party in I.V. and would be people go off to it?”

For this EP, it seems like the answers to those questions would be yes and… yes.

Right off the bat, “Gold Necklace” is too alive to ignore. Quick, driving synths, big bass, flying vocals and a powerfully catchy chorus make it easy to picture blasting through the speakers of a classic I.V. house party, complete with the trademark undulating crowd of teens and twenty-somethings singing and casually spilling their half-full red cups on one-another.

“Space and Time” follows, complete with FMLYBND’s signature style of unforgettable synth hook, huge drops, easily-recognizable and quickly-learnable vocals and a layer of summery guitar on top. A definite mood booster to shout out the windows on the next drive down the 101.

Montgomery describes the title track “Hearts on Fire,” as “passionate” and “anthemic.” Once again, a catchy synth and drum intro lead to initially calm, ultimately rising vocals by Montgomery and fellow FMLYBND vocalist Braelyn Montgomery. A simple, but incredibly fun chorus makes this song accessible for the dedicated listeners and casual partiers, alike.

The penultimate “Phoenix,” signals a shift from the upbeat, poppy trio that composes the first songs. It opens with some heavy, slightly grungy electrics and moves into a synthesizer riff that moves all over the board, with airy vocals and pained lyrics that almost deceive the listener into thinking this song has dark heart. But FMLYBND’s relentless energy makes even this, the least ‘happy’ song on the EP, a song of energetic redemption.

According to Montgomery, the final track on the EP, “Land of the Rising Sun,” is about the Isla Vista mass murder of May 23, 2014.

“That one is pretty much dedicated to the family and friends of the victims,” Montgomery said. “The chorus is pretty much an encouragement … ‘When you feel like you can’t go on, all you think about is how they’re gone. Someday we’ll see them in the land of the rising sun.’ Which is a place of hope.”

This last song, despite the emotionally challenging content, uses gentle, ambient vibes, a light drumbeat and Montgomery’s passionate vocals to maintain a sense of positivity and peace. The track, and thus the EP, ends with soaring vocals that leave you feeling satisfied and optimistic, but still yearning for the next album… or maybe just a replay.

Despite clocking in just under 20 minutes, Hearts On Fire is anything but short of expectations. Everything from the short fills to the precise synthesizer work is a result of the band’s intentionality. A start-to-finish run through is the best way to understand the journey that this collection represents for the band.

“It’s just a reflection of my life … so it’s kind of letting people into that experience of watching best friends not become best friends, seeing people die,” the lead guitarist said. “It’s heavy, in this beautiful paradise there’s all this crazy stuff that can go down. It’s figuring out how to be the best person you can be, figuring out how to love people, how to love yourself”

Despite the depth of the music, it’s not meant to be too heavy, rather it’s something to help people come to terms with the struggle of humanity, to celebrate life and enjoy it.

“It’s this whole love, mixed with pain, and at the end kind of very triumphant. It’s happy, it’s love, dark, sad, hopeful,” Montgomery said. “It’s not a depressing EP, it’s not a happy EP. It’s all over the place. But it flows as one.”

After the launch of this EP, FMLYBND is set to start working on their first full length album. “We want everything to be out of the box, meaning nothing is made on the computer. Not a synth not a drum,” Montgomery said. “I wasn’t everything to be 100 percent real. Like we tracked it. Epic. Like the sickest synth patches you’ve never heard because we made them on this analogue synth.”

Until the next release, keep your peeled in IV. FMLYBND is just waiting for an open front yard on DP, but stay tuned because you’re not going to hear about it until you hear it blasting through the streets.

FMLYBND will be having their EP launch party on January 23rd at Velvet Jones. Tickets are available online.