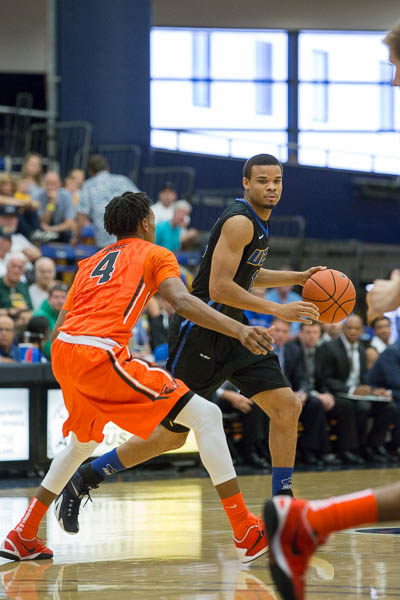 DaJuan Smith looks for an opening through the defense. Dustin Harris/Daily Nexus

Winners of four straight heading into its Big West opener at Hawai’i, the UCSB men’s basketball team fell to Hawai’i 65-57 on the road this past Saturday.

The loss brings the Gauchos to 6-8 overall and 0-1 in conference. The Rainbow Warriors meanwhile improved to an impressive 13-2 overall and 2-0 start in Big West play, extending their current winning streak to five. They are 9-1 in through their last 10 outings.

Both teams struggled with their shooting out of the gates, matching each other at 33.3 percent from the field in the first half. Although the Gauchos took a slim 28-27 lead into halftime behind 10 first half points from senior guard Michael Bryson, UCSB could not find a way to sustain a lead the rest of the way.

Sophomore guard Gabe Vincent knocked down his third three-pointer of the half and career-high fifth of the night with 3:57 remaining to bring Santa Barbara within a point at 58-57, but the Rainbow Warriors went on a 7-0 run to close out the game, including 5-6 from the free throw line.

A huge lay-up to beat the shot clock by junior center Stefan Jankovic with under a minute remaining put Hawai’i up 61-57, and the Gauchos were unable to answer in their final possessions, falling 65-57.

Hawai’is Isaac Fleming led all players with 22 points, matching Vincent by hitting 3-5 from deep in the second half. For the game, the sophomore guard went 7-13 from the field and 5-5 from the free throw line. Jankovic was solid the entire night, putting up 19 points on an efficient 9-14 from the field to go along with nine rebounds.

The free throw disparity in the second half favored Hawai’i 13-2 in attempts and played a big part in the UCSB loss as it has all season. At the start of conference play, the Gauchos ranked last in attempts by a wide margin at just 199 through 15 games, while Hawaii had already surpassed 330 attempts.

While the offense struggled as a group, Bryson and Vincent were able to keep UCSB in it until late. Bryson finished with his second consecutive double-double and fourth of his career with 16 points and 10 rebounds.

Vincent, whose only made field goals came from behind the arc, continued his hot shooting of late as he made 5-9 from three on his way to 17 points. He has now made 15 of his last 31 three-point attempts (48.4 percent) over the last five games.

UCSB outrebounded its opponent 39-37 for the night but shot itself in the foot with turnovers. The Gauchos turned the ball over 19 times compared to just 12 by the Rainbow Warriors, who outscored UCSB 23-10 in points off turnovers.

The Gauchos will be back in action this Thursday when they face Blue-Green rival Cal Poly on the road before coming back to face UC Irvine this Saturday at 4 p.m.