The Daily Nexus
Regents
Regents To Vote on Student Advisor Proposal
January 7, 2016 at 5:00 am by Neil Yanga 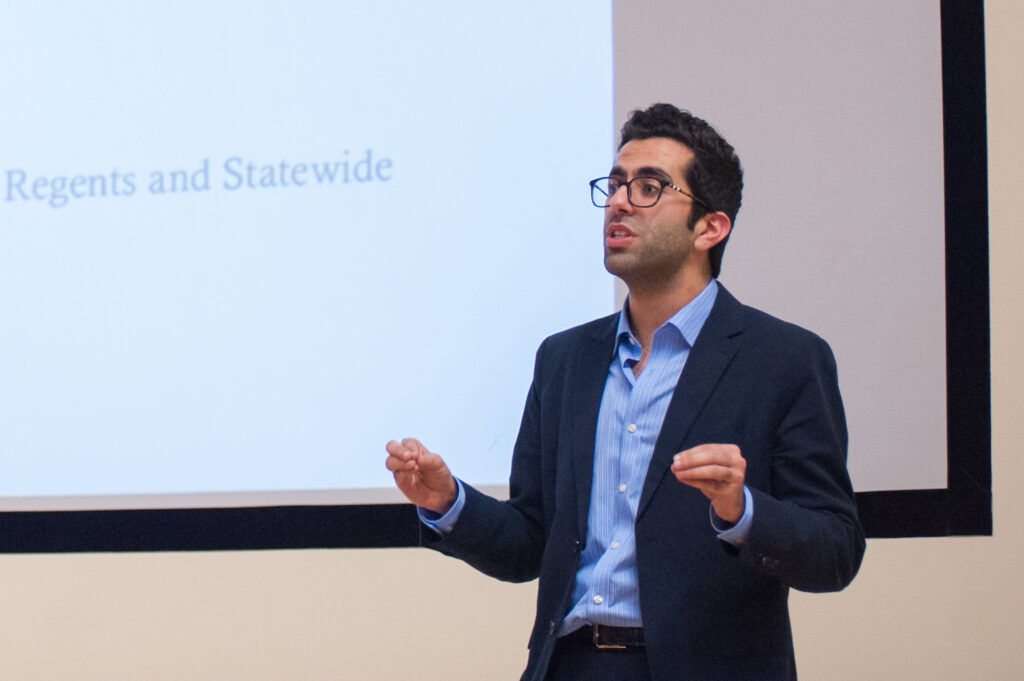 UCLA student Avi Oved created the proposal in the hopes of establishing more student representation on the Board as part of his Shared Governance Campaign. File Photo

The proposal is part of Oved’s Shared Governance Campaign, which aims to increase student involvement and representation in the Board of Regents, eventually through an addition seat on the Board. The Student Regent Advisor would not receive a vote on the Board, but would work in partnership with and advise the elected Student Regent to advocate for student issues in the Board. If passed, a two-year pilot program will take place to assess the effectiveness of the position.

Oved, a student at UCLA, said the ultimate purpose of the proposed position is to increase student representation on the Board of Regents and expand the role of students on the Board.

“The student advisor proposal aims to establish an additional student seat on the UC Board of Regents,” Oved said. “What we’re trying to accomplish here is creating another platform that essentially has the critical elements that the student regent position has. That includes having a seat at the table, and an independent voice that can really speak on issues and contextualize conversation.”

Off-campus senator and second-year Asian American studies and political science double-major Akshaya Natarajan said the position will give the Board a more well-rounded view of the UC student body.

“It is very difficult to put yourself in the shoes of someone that is of a completely different educational background,” Natarajan said. “Undergrads and grads both have very different issues. Getting that representation, and the very least getting a voice on the board and in every single meeting will be important.”

Miles Ashlock, Student Regent Recruiter Coordinator and Associate Director of Office of Student of Life, said a diversity of educational backgrounds is necessary to accurately represent student issues on the Board of Regents.

“There needs to be an understanding of the diversity of undergraduate, graduate and professional students, and the differing needs that will come to the table because a lot of times, any policy action will affect one of those groups or may affect a group differently than another,” Ashlock said.

“The UC Regents, the people who govern our university, who raise our tuition, who make every important decisions in regards to what happens at the UC are usually people who are appointed on 12-year tenure and they oftentimes don’t have student’s best interest at heart,” Mirza said.
For the full story, see dailynexus.com.
Oved said when he established the Shared Governance Initiative last summer there was almost no “groundwork” in place.

Oved said having another student involved on the Board will create a partnership to address student issues and topics with regents.

“Often times, it’s daunting to be in that setting where there’s a lot of personalities on that Board, and a lot of accomplished people who have lots of experience,” Oved said. “So it can be very intimidating sometimes to be the sole individual who has a specific stance on an issue and to voice that.”

Oved said many UC student organizations including University of California Student Association (UCSA) and the UC Council of the Presidents support the proposal.

“We’ve been collecting input and ideas about this position since the beginning of my term last July, so we’ve started the conversation then, working with student leaders to see what we want out of this position,” Oved said. “What came out of it is an unprecedented domino effect of support.”

According to Natarajan, A.S. Senate passed a resolution in support of Oved’s proposal last fall.

“What we did is we passed a resolution in favor of the student advisor proposal,” Natarajan said. “The resolution we passed was very similar to the ones passed by other UC’s, however we tweaked it a little bit to fit UCSB’s needs a little more.”

Oved said there are also many supporters for the proposal on the Board, including UC President Janet Napolitano.

“I’ve worked closely with President Napolitano and her team, who’ve been extremely supportive throughout the entire process,” Oved said. “The new chair, Monica Lozano, has really been a champion of this. Then there is of course a lot of advocates in the Board of Regents from Regent Perez to Regent Bonnie Reiss and a lot of others in between.”

Ashlock said he supports looking for more ways to expand not only student representation, but also faculty and staff within Regents.

Natarajan said the Student Regent Advisor position is a good stepping stone to eventually increasing student votes on the Board.

“A student advisor position is something that is favorable and that according to Avi, has not only been approved by the UC President Janet Napolitano, but also other Board of Regents as well,” Natarajan said.

Mirza said although it does not add a student vote, the proposal will urge the Board to further address UC students’ voices.

“Even in terms of the voting power that we have, one or two student regents isn’t very large,” Mirza said. “But being at the table will help students shape the conversations happening in regards to the university’s governance.”

Natarajan said another student position will allow for UCSB and other underrepresented UC campuses to be involved with the Board.

“Typically, some schools have had more regents from their schools rather than others, like for instance UC Berkeley and UCLA had a lot of regents,” Natarajan said. “One thing that will be very nice for UCSB is that it could mean more student spots that could potentially go to a UCSB student.”

Natarajan said A.S. will have a big role in educating students about the proposal and choosing the candidates for the Student Regent Advisor position.

Oved said he would have appreciated a Student Regent Advisor during his term and said the extra help would have encouraged agendas to be seen through more thoroughly.

“I would say every single day I wish I had another student regent advisor,” Oved said. “There are so many instances where it would be beneficial to have another Student Advisor Position that can not only drive forth the agendas we have in front of us, but also make sure that we’re not letting anything fall through the crack.”

A version of this story appeared on page 4 of the Thursday, January 7, 2015 print edition of the Daily Nexus.

Visit http://www.gaucho4regent.com for information about the existing Student Regent role. Applications are due on Feb 28! Our current Student Regent and Student Regent-designate will visit UCSB on Jan 26. Stay tuned to the website for details of their visit.