The Daily Nexus
Swim and Dive
Men’s and Women’s Swim Back in Action After Break, Host UNLV Saturday
January 7, 2016 at 5:02 am by Daniel Moebus-Bowles 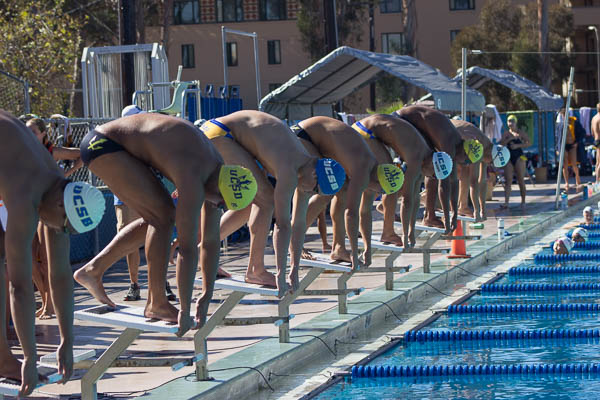 After a long break from dual meets, the UCSB men’s and women’s swim teams will return to Campus Pool this weekend to welcome in a historic rivalry. The Gauchos will host UNLV this Saturday for their first competition of 2016.

Santa Barbara will be competing in its first dual meet since early November when both teams defeated UC San Diego at home. The men’s team took down the Tritons 142.5-111.5 while the women’s team won its meet by a score of 139-115. Since the date of this weekend nearly two months ago, the Gauchos have been preparing for the remainder of the season with a few big meets, featuring multiple teams in competition.

First on the schedule was the A3 Performance Invitational, where both teams headed down to Los Angeles, CA to test their speed against schools from all over the state. In a pool of 14 teams, the UCSB women’s team took 2nd place in the competition scoring a total of 914.5 points, nearly 200 points better than the third-placed University of the Pacific. The men’s team notched a second-place performance as well in a pool of eight teams with its total of 1093 points. The men topped some familiar foes in Cal Poly, UC San Diego, and Hawaii along the way to their impressive mark.

Both teams saw some very impressive outings by each of its 400-meter freestyle relay teams as both took second in the event, helping push their point totals up to the top of the meet. The women’s team, headed by senior freestyler Lauren Vosseler with the event’s best time, topped the competing schools with its total time of 3:21.24. On the men’s side, freshman sprinter Mason Tittle had the quickest heat and helped his team win silver as it came in just a tenth of a second faster than UCSD at 2:59.84.

The second stop for the Gauchos during their break in the regular season came at the Texas Invitational in Austin, TX, where Head Coach Gregg Wilson took a few select athletes to race against some of the best competition in the country. Vosseler again showed off her toughness in the 200-meter freestyle event, taking 12th place in the final heat of 32 swimmers. She marked this spot with a time of 1:48.11. Junior Kelsey Leonard and senior Kimmie Kreuzberger followed just behind their teammate, taking 23rd and 25th, respectively.

This weekend, the Gauchos will see a struggling UNLV Rebels team that has not yet found its rhythm in dual meet play. The men’s team of Las Vegas comes in winless with a record of 0-4 on the season, while the women’s team will be coming off of its first wins of the season from a multi-team meet and sport a record of 2-5. They are led by junior Lina Rathsack, who picked up three individual wins in the team’s last meet to help give her Rebels their first victories of the season.