The Daily Nexus
Opinion
What is in a Major: One Student’s Journey
December 18, 2015 at 6:00 am by Sabrina Hodjati 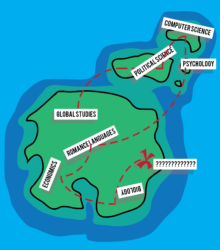 I was told that the first two years of college are a time for exploration of interests, introspection and scholarly curiosity. I would arrive through Henley Gate a lost and curious freshman and confidently emerge after two years a focused and driven young scholar with a direction, a plan and ample finances to accomplish it all. I am now on the brink of Winter Quarter of my second year, and rather than “confidently emerging” anywhere, I’m definitely doing more of a brisk walk — if not a pained crawl — through my academic year thus far. My first year was certainly informative; I learned that I love comparative literature! I learned that the global spread of diseases is fascinating! I learned that the United States should probably issue formal apologies (in the form of cold, hard cash) to about every minority within its borders! And I learned that my interests lead to absolutely no single direction/major/career/anything that will please my parents whatsoever! Add to this the expectation that pre-reqs for most majors require a sizable portion of one’s second year, and you’ve got a sophomore with at least four mid-life crises under her belt.

I wasn’t completely lost before entering UCSB. I chose the school partially because I believed that law school was an inevitability and, given the UC’s price relative to my private school options, it’d serve me well to save money now. My idealistic law school bubble was abruptly burst, however, upon my decision one day to research law school, its costs, its job placements, etc. — page after page of articles, op-eds, news reports and blogs condemning law school for the abysmal debt it causes, the shrinking law market it fails to accurately report on, and the burgeoning levels of depression and alcoholism among lawyers that it conveniently hides assaulted my eyes and diminished any naive sense of optimism I’d once held. While I have not definitively ruled law school out as a possibility, I have certainly given thought to the reality that a $250k investment in a shrinking industry notorious for its unlivable work hours and substance abuse issues may be something to reconsider. Interestingly enough, the news that I would not be blindly repeating the mistakes of so many lost English majors before me and making possibly the worst investment of my life was not pleasing to my parents, who’d banked on my entering the prestigious “law industry” as an assurance of my financial independence and of their bragging rights to the Persian community of Los Angeles. To explain to them that I may not actually fulfill the Golden Persian Triangle by becoming either a doctor, lawyer or engineer was not easy, especially since as a first-generation college student I’ve been given more opportunity than both of my parents combined and am expected to make good use of their many sacrifices.

After deciding to put a life of possible misery and alcoholism on hold for a few years, I was met with the task of figuring out Plan B. I decided upon an interdisciplinary major, Global Studies, to complement my interests in economics, sociology and international affairs, but still wasn’t satisfied with the job prospects of a mere humanities major. I recently decided to brave the notorious Economics curve and try to tack it on as a double major, but often find myself fearful that I won’t make the cut into the major, or that I’ll compromise my GPA so much in my attempt that my prospects of attending a good law/grad school will be sacrificed in the process. In this flurry of trying to take the prerequisite courses for several majors, planning my study abroad and navigating the bureaucracy of public school academic advising, I’ve often failed to ask myself if I’m even enjoying what I’m studying. In the midst of quizzes on excess burden and papers on the sociology of Botswana, I sometimes yearn for the biology and chemistry I took in high school or the literature classes I took first quarter. As I pass by the lagoon on the way to class, I can’t help but wonder about a life in which I study the billions of microbes traversing its (gross but fascinating) waters and contributing to sustaining our planet. Articles by the late Oliver Sacks spur a passion for psychiatry, films by Scorsese make me wonder why I’m not pursuing an art, advocacy work by the United Nations leaves me researching the Peace Corps website and one look at Kendall Jenner’s social media makes me wonder why the hell I’m in college at all when someone my age is dancing around Milan with Rihanna on a regular basis. I’m certainly not alone in my possible compromise of passion for pragmatism, and I’m definitely not alone in envying those who’ve merged the two. But I, as we all are, am alone in my individual attempt to find some balance between the two that won’t leave me an unfulfilled and indebted young graduate.

I’ve received plenty of advice from a network of well-meaning family, family friends, (nosy) neighbors and friends. As most of us realize eventually, however, such advice on decisions as individual and vital as these can only go so far. The advice that law school pays itself off may very well be outdated, the advice to major in what I’m passionate about and just roll with it doesn’t take into account any change in the economy/tuition since 1960, the advice to major in computer science because it’s an emerging field is no longer applicable. I think the best advice I’ve received so far has actually been to take the advice of others with a grain of salt because no one offering the advice will have to face the repercussions or reap the rewards of said decision (except our parents, who’ll probably have to house/feed us after we move back into the guest room). After several nerve-wracking Google searches of happiest careers with best job prospects (hint: we should ALL be plumbers) and hours of listening to the advice of intelligent strangers on Quora, I came to the conclusion that this ambiguity and lack of direction are probably inherent in the lives of people with a determination to not just settle. It is worth delaying the gratification of validation from your parents (or your judgmental foreign family members) to figure out the trajectory of your life, and if that trajectory changes several times, so be it. Worst (or best?) case scenario, you major in Romance Languages and become the most suave plumber in town.

Love the College lifestyle, don’t focus if you don’t have to, life is good, yes it is an expensive party, but with so many people of your generation graduating from college it does not say so much once you have finished.