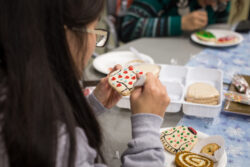 The Ugly Sweater Party took place after the first day of instruction following Thanksgiving break, and on the official commencement day of “Dead Week.” R.A. of the Zaca house and second-year biochemistry major Mitine and R.A. of the Camuesa house and third-year sociology and psychology double-major Aranki invited students to don holiday attire and relax before finals.

Mitine said she enjoyed watching friends gather together in Loma Pelona and decorate cookies from an ugly sweater cookie kit.

“It makes you feel like you’re in kindergarten,” Mitine said. “You’re decorating cookies and people are talking and getting to know each other.”

Mitine said she is excited for Christmas break because she wants to spend time with friends and family and enjoy her first Christmas in Hawaii. Mitine said organizing the event was fun because she loves Christmas and the winter season.

“Decorating was fun,” Mitine said. “The holiday times are my favorite, so doing a program like this was not a problem.”

Third-year biology major Yaneli Gutierrez said her favorite part of the party was decorating cookies, which she modeled after her reindeer sweater. Gutierrez also said she attended the party because she enjoys Christmas and ugly sweaters.

“The tackier the better,” Gutierrez said.

Aranki said she wanted to host a fun holiday party as a “de-stresser” for her residents.

“I really care about residents a lot, especially their mental well-being,” Aranki said.

Mitine said she hoped the event would be a fun way to bring the residents together.

“Everyone always talks about how they miss being home for the holidays,” Mitine said. “Dead Week and finals are so stressful.”

Mitine said the Loma Pelona Center was chosen for the event because it is between Manzanita and San Rafael residence halls and facilitates opportunities to meet other students.

“I think it’s just a nice way to get people out of their room or away from the library for a little bit and to all be out here together,” Mitine said.

Third year biology major Heidi Lee said Christmas is one of her favorite holidays because she gets to spend time with friends and family.

“I want to skip over finals and get to break,” Lee said.

Leenknecht said she enjoyed attending the party in preparation for winter break, although she wishes she was returning to Santa Barbara in January.

“I wish I could come back here afterwards,” Leenknecht said. “I have to stay home unfortunately.”