Playing in just its second home game of the season, the UCSB men’s basketball team welcomes the USC Trojans to the Thunderdome tonight at 7 p.m. 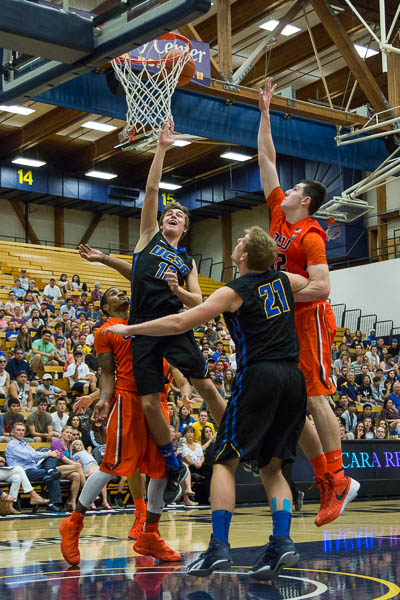 The Gauchos went 1-1 on the road last week and are coming off Sunday’s tough 70-68 loss on a last-second, game-winning putback by Arizona St.’s senior forward Eric Jacobsen. They enter tonight’s matchup with a record of 2-3.

Although expectations weren’t exactly sky-high for USC coming into the year, a big 72-69 upset road win over then No. 20 Wichita St. one week ago capped a surprising 5-0 perfect start to the season. The Trojans have since dropped their last two games on the road to No. 12 Xavier and Monmouth and come to Santa Barbara at 5-2.

Inconsistent shooting had been the story for the Gauchos to start the season, but they appeared to find some answers on the offensive end in their last two outings, particularly from their starting guards in junior Eric Childress and sophomore Gabe Vincent.

Against Arizona St. on Sunday, Childress put up an all-around stat line characteristic of his ability to do all the little things, recording nine points, seven rebounds, six assists and two steals. Vincent, who had been particularly struggling with his shot through the first three games of the year, went 12-25 from the field and 6-13 from deep over the past two games. He is averaging 10.8 points and 1.4 steals per game, good for third and second best on the team, respectively.

Two players who have most certainly not hurt UCSB’s shooting percentage are seniors Michael Bryson and Sam Beeler. Since missing the first game of the season due to suspension, Bryson has stepped easily into his role as the team’s best offensive player, shooting a team-best 37.5 percent from three and 48.2 percent from the field. His 18.8 points per game average ranks second in the Big West.

Beeler, who has started all five games at center, has shot an extremely efficient 76 percent from the field, finding most of his shots deep in the paint for an average of 7.6 points a night.

The Trojans’ 5-0 start to this season was their best start since going 8-0 in 2000-01. They are led on the offensive side by former Etiwanda High School standout guard Jordan McLaughlin. The sophomore, who was voted one of the team’s two captains for the 2015-16 season, was named to the Pac-12 All-Freshman team last season with averages of 12.1 points, three rebounds and 4.5 assists. He has been especially hot to open this season, leading the team with 15.3 points per contest and shooting 55.2 percent overall and 51.9 percent on threes.

Backing him up are junior guard Julian Jacobs and freshman forward Bennie Boatwright, who come in averaging 12.4 points each. In just his freshman year, Boatwright has impressed with an ability to score from inside and out, tying McLaughlin for the team lead in three-pointers made with two per game.

Jacobs has shown that he can do much more than just score, sitting at second on the team with averages of 6.3 rebounds and 1.28 steals and leading the way with 5.5 assists.

Tonight’s game will be the Gauchos’ last home game of 2015 before playing their next six on the road. Tip-off is set for 7 p.m. at the Thunderdome.

A version of this article appeared on page 14 of December 3, 2015’s print edition of the Daily Nexus.