“CAM-V-P, CAM-V-P, CAM-V-P!” Those were the chants that were continually shouted by Panthers fans during Carolina’s 44-16 rout of the Washington Redskins’ last weekend. After a five touchdown performance and leading his team to a now perfect 11-0 start, Cam Newton deserves all the praise for the magical season he is producing.

Not including Thanksgiving’s 33-14 win over the Cowboys, over the previous three weeks, Cam has thrown nine touchdowns to just one interception while posting a quarterback rating of 113.6. He has led the Panthers to the aforementioned 11-0 start and led them in winning 17 of their last 18 games dating back to last year, including the postseason.

However his overall statistics this season haven’t been spectacular. Newton’s 2,283 passing yards is ranked 20th in the league while his quarterback rating is 16th. He has also only thrown for 300 yards in one game this season. The former No. 1 picks’ best statistic is his 20 passing touchdowns, which are tied for sixth best. 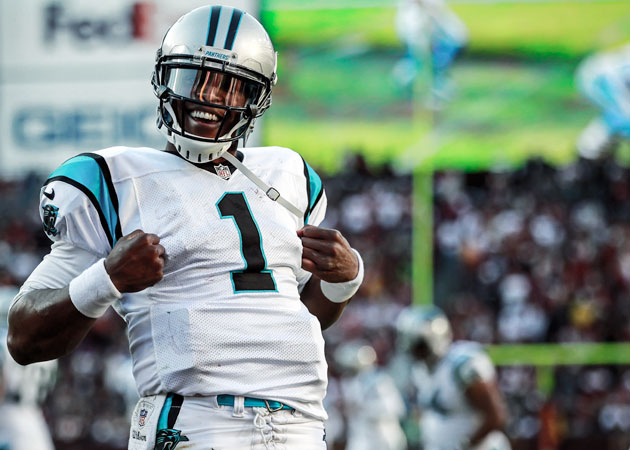 Because of this media members feel Newton is not MVP caliber. His stats do not measure to Tom Brady who also has led his team to a perfect start of 10-0. Brady is the league leader in passing yards and is top five in the league in passing touchdowns.

However, Brady has Rob Gronkowski, the best tight end in the NFL. Newton does not. Brady has Bill Belichick, one of the greatest coaches of all time. Newton does not. The point being made here is that Newton is working with substantially less talent.

Newton’s No. 1 receiver, Kelvin Benjamin, has not played a single game this season due to an ACL tear in training camp. This means Cams’ No. 1 receiver is Ted Ginn Jr., who only has 232 receptions in his entire career, the worst for any No. 1 receiver with over four years of experience.

By only focusing on Cam Newton’s statistics, these MVP voters are missing out on the true greatness he has displayed this season: his maturity.

One of Newton’s biggest criticisms his entire career is that he isn’t mentally strong enough. Many times in the past he has been criticized for his poor body language that express he doesn’t have what it takes to lead a team.

In the past Newton would’ve called out the media for those reports. He would’ve expressed his emotions in a way that made him look thin-skinned. This year however, he just goes out and proves those reports wrong.

Against the Seahawks in week six, Newton led his team on two 80-yard drives in the fourth quarter to comeback and beat last year’s Super Bowl runner-up 27-23.

Two weeks later on Monday Night Football, Newton drove his team to FG range twice in overtime to defeat the Colts’ 29-26. Even with a drop by his No. 1 receiver that could’ve ended the game, Newton never lost confidence and continued to lead his team.

In both those games, Newton had the will to win. Instead of succumbing to the pressure of the moment he led his team like the great quarterbacks such as Tom Brady, Drew Brees, Aaron Rodgers etc. constantly do.

The maturation process from Newton is one of the greatest things I’ve ever seen. From a young player who was always caught pouting on the sideline after committing turnovers to a mature NFL quarterback that always has that killer-confident smile, no matter the situation, that screams “I’m going to win this game no matter what.”

With the decline of one of the greatest quarterbacks ever in Peyton Manning and the rapid aging of some of the best quarterbacks over the last decade such as Drew Brees, Tom Brady, etc., NFL fans must be worried about who will be leading the next batch of great QB’s. Cam Newton is putting those worries to rest.