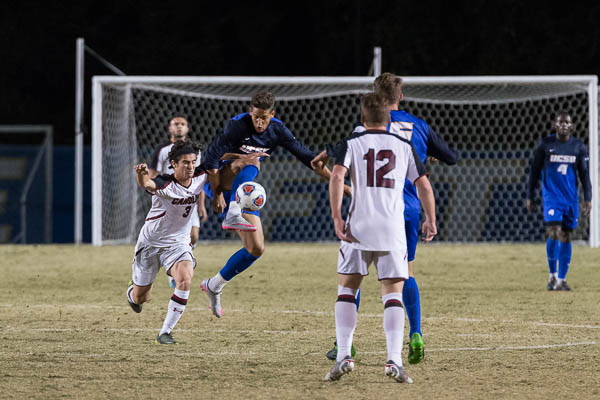 Kevin Feucht jumps up, kicking the ball away from the defender. Eric Swenson/Daily Nexus

Neither No. 19 UCSB nor South Carolina could find a goal during regulation in their NCAA Tournament Second Round battle on Sunday night, but it took less than three minutes in the first overtime before junior attacking midfielder Ismaila Jome placed a perfect strike with his weaker right foot from 20 yards out to give UCSB its first NCAA Tournament win since 2011. The win earns the Gauchos a ticket to face No. 2 Clemson next Sunday in their seventh Sweet Sixteen appearance in program history.

“It never gets old playing in the NCAA Tournament and I thought we were excited and ready to play tonight,” Head Coach Tim Vom Steeg said. “We all know Ish’s season has been rough with [a sprained left ankle], but at least he picked the right foot to finish with that one.”

After failing to win a postseason game the past two seasons, Santa Barbara has another chance to prolong a magical season in which it has gone 14-6-2 overall and 2-1 in playoffs. The Gamecocks conclude their season with a record of 11-8-2 after playing one of the most difficult schedules in the nation.

“This season I’ve been injured, it’s been frustrating but the team has done really well getting this 15 seed and first round bye,” Jome said. “It’s just been wonderful to win and get past the second round which has been a barrier for us the past couple seasons.”

While the Gauchos had been dominated for much of the second half, they regrouped towards the end of regulation and came out strong in the overtime period, holding South Carolina without a shot attempt for the final 20:17 of play.

“I was very proud of the strength and mental toughness that our guys showed,” South Carolina Head Coach Mark Berson said. “The big thing was we were able to link up passes, keep the ball, take a little pressure off ourselves. Credit to our guys that as the match went on, we got stronger, and I’m very proud of that.”

That set the stage for Jome, who had just nearly scored on a header one minute prior, to pick up his third goal of the season and the biggest of his life. The final sequence began with junior midfielder Andy Perez whipping it into the box for junior forward Nick DePuy. The nation’s leader in game-winning goals nearly notched his ninth of the year, but his off-balanced, slightly deflected shot from seven yards out was cleared off the line by junior defender Matt McManis.

Fortunately for UCSB, the ball fell right to Jome outside the 18-yard box. Although he has reminded us of just how dangerous he can be with his play during the postseason, setting up defenders to one side before bursting to his stronger left has become predictable at times. This time, Jome took on the defense to his right, catching Gamecock sophomore goalkeeper William Pyle off-guard as he placed the shot perfectly inside the far post.

“I was going to cross it but they had two defenders blocking my left, so I thought ‘Why don’t I just go right for once?’” Jome said. “I had been practicing it in the spring, so I go right and I just hit it and thankfully it went in.”

Multiple announcements had been made throughout the game warning fans that they would be ejected for throwing tortillas, but after being shutout for the previous 194 minutes playing at home, the sea of fans finally had its chance to erupt along with a cloud of blue smoke as the Gauchos celebrated emotionally on side of the field nearest to the crowd.

It was a tale of two halves as UCSB outshot South Carolina 10-1 through the first 45 minutes before the road side stole all momentum in the second stanza.

“[South Carolina] is a good team, so you can’t keep running at them the whole time,” Vom Steeg said.

The game felt eerily similar to the Gauchos’ loss to Fullerton in the Big West Championship, as the Gamecocks came very close on a number of occasions in the second half, but were unable to place one past sophomore goalkeeper Brandon Berke, who for the second game was filling in for injured freshman Justin Vom Steeg.

“I thought Berke did everything we asked for,” Tim Vom Steeg said. “He was clean, punched a couple balls he had to punch. He is not going to cost you the game and he’s been training great, so tonight we went with the goalie who was 100 percent.”

Other than the goal, the play of the day was provided by sophomore midfielder Kevin Feucht, who led the Gauchos with four shots. Off a corner kick in the 37th minute, Feucht lined up a dazzling bicycle kick, which he hit perfectly on target. Pyle was in the perfect position to save it though as he was for most of the game, as he racked up one of seven big saves on the night.

The Gauchos have now given up just one goal in their last four games, having found a lineup that works with senior Duncan Backus moving from right back to defensive midfielder. Perez was moved to right back in the game and played superbly, making clutch stops when he needed to and providing a great spark down the right wing.

“Andy is a player who works hard for us, he’s disciplined enough, he tracks, he’s a hard working two-way midfielder,” Vom Steeg said. “The key in that whole move was simply getting Duncan back in the middle of the field, and if you’ve seen we’ve controlled almost 70 percent of these games now.”

With the game potentially heading into penalties, Justin Vom Steeg warmed up from the bench, despite being held out with a bruised shoulder.

His recovery will be watched throughout the week as he hopes to suit up for his team against No. 2 seed Clemson on Sunday.