The Daily Nexus
News
Winter Marks an Expected Increase in Monarch Butterflies at Ellwood
November 19, 2015 at 5:00 am by Sierra Deak 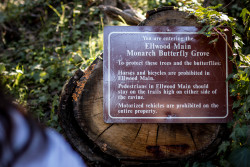 An increased number of monarch butterflies is expected to inhabit the Ellwood Monarch Butterfly Grove this winter as part of their annual migration to the west coast.

In recent years, the monarch butterfly count at Ellwood has decreased significantly due drought conditions, which have depleted nearby water sources monarchs need for survival. Biologists are hopeful the butterfly count will continue to increase with the upcoming El Niño.

Althouse and Meade biologist Jessica Griffiths said the monarchs travel to groves on the west coast for protection during the winter months before migrating back inland to mate in the spring.

“The butterflies that are there over the winter are mostly not mating. The bulk of them are just there to last the winter in a place that doesn’t freeze and has the right conditions. In the spring, that’s when they mate,” Griffiths said. “Then they leave, and the females have made it and now they go out and they lay the first spring generation on milkweed plants.”

Ellwood Docent Coordinator Luz Reyes-Martin said monarchs are attracted to the grove because there is a nearby water source and the area is protected with trees.

“It’s in a valley, it’s really protected with the dense eucalyptus trees and there’s a creek that runs along where the grove is,” Reyes-Martin said. “When it rains, there’s water there for the butterflies, and they really need that close proximity to a water source.”

Griffiths said there has been a long-term decline in the amount of monarchs resting at Ellwood.

“Apparently decades ago, Ellwood was crazy; there were hundreds of thousands of butterflies there,” Griffiths said. “In the last 10 years, the most you were going to see there was something like 30 to 40 thousand.”

According to Reyes-Martin, there has also been a recent, more rapid decline due to California’s drought.

“They need that water source, and since we have been in a drought for several years, that creek that I mentioned has been completely dry,” Reyes-Martin said. “It [the butterfly count] has gone down for us, though what I have heard is that state-wide the numbers haven’t gone down as much. We just see them shifting to other places looking for a water source.” 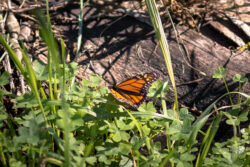 Griffiths said the benefits of the upcoming El Niño will most likely take shape next winter.

“The El Niño could have all kinds of positive cascade effects because more water means the eucalyptus trees will start to recover, and also more water generally means more milkweeds,” Griffiths said.

Griffiths said she encourages people to visit Ellwood to witness this year’s anticipated increase in monarchs.

“People should still definitely go check out the butterflies because I think there are going to be more this year than last year, and even though there’s not necessarily going to be 30 thousand, there’s still going to be a lot and will still be pretty spectacular,” Griffiths said.

Fourth-year communication and history double-major Julia Montgomery said she has visited Ellwood to see the monarchs.

“I wanted to check it out because this grove has been a natural resting place for the butterflies for decades, and somehow they just keep coming back. It’s really cool to think about,” Montgomery said.

Third-year biology major Sachiko Lamen said she enjoyed the scenery when she went to Ellwood.

“The actual butterfly sanctuary is confined to a small area, but the walk through the rest of the forest is beautiful,” Lamen said in an email. “There’s lots of greens and earthy browns that aren’t a very common sight in Santa Barbara nowadays.”

Actually there are slightly fewer fall migrant monarchs arriving in Santa Barbara county this fall as compared to last year. And despite the expected heavy El Nino rains this coming winter, there could be even fewer fall migrant monarchs arriving in the County next fall. Why? Because when heavy rains in early 1992 ended the severe 1987-1991 drought, the monarch breeding population in the summer of 1992 crashed and so the fall migration of 1992 was weak. In other words, monarch numbers do not reliably increase after wet winters. The reverse can also happen.

Two years ago, my wife, Ann and I launched SaveOurMonarchs Foundation solely dedicated to saving the Monarch Butterfly by distributing  milkweed seeds for their survival.

It is called SaveOurMonarchs Foundation and is devoted to helping to save the monarchs by distributing FREE Milkweed Seed Packets to anyone requesting them.  You can get Swamp Milkweed seeds at SaveOurMonarchs.org.

No Milkweed, No Monarchs!