The Daily Nexus
Swim and Dive
Swim Heads to LA for A3 Performance Invitational
November 19, 2015 at 4:59 am by Daniel Moebus-Bowles 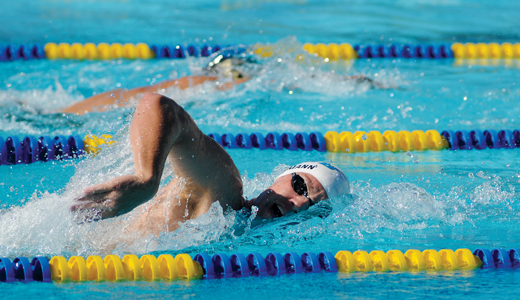 This weekend the UCSB men’s and women’s swim teams will head down to Los Angeles, CA to compete in the A3 Performance Invitational.

Heading into this meet, the women’s team holds a strong record of 3-1 and the men come in at 1-2.

This prestigious meet will bring quality programs from all over California to East Los Angeles College for a midseason tournament. With the Gauchos included, there will be eight schools participating on the men’s side and a deep pool of 12 for the women’s.

Among the competitors will be some familiar foes from the MPSF Conference, which both Santa Barbara teams compete in now. The Gauchos will get a chance to see rival Cal Poly, Pacific and Hawaii, whom they will face again later on in the season in dual meets and the MPSF Championship.

This year, Santa Barbara’s men’s team will be looking to go back-to-back as it earned first place in the tournament last year. It will be a tough task for the Gauchos to match their victory from last season, as they won the meet with a total score of 1911, over 600 points better than the second-place finisher in UC San Diego.

The women’s team took third in the competition last year, scoring 875 points and were narrowly outperformed by San Diego State and UCLA. Competing in a pool of 15 schools last year, the Gauchos will look to improve their standing in this weekend’s events.

This meet is one of two that UCSB will compete in during the break of its dual meet season, which will continue in mid-January, as they are set to head to Austin, TX for the Texas Invitational just two weeks from now. This will be a crucial time for the team to prepare for the long road ahead, and eventually the MPSF Championships in February.

The A3 Performance Invitational is set to start early this morning and the final events will conclude on Saturday afternoon.