The Daily Nexus
News
EAP Students Safe in France, Opt to Remain Abroad
November 19, 2015 at 5:00 am by Zareena Zaidi 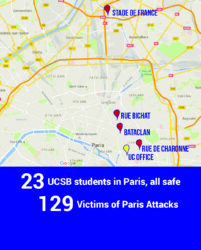 Maddy Brockert was in the Stade de France in Paris for the France vs. Germany soccer game on Nov. 13 when a bomber outside the stadium began the first of several terrorist attacks on the city that evening.

Brockert, a third-year sociology major and Education Abroad Program (EAP) student, is one of 23 UCSB students currently studying abroad in Paris. Following the terrorist attack, which left approximately 130 dead, UCEAP successfully confirmed the safety and location of all UCSB students in Paris.

The Islamic State of Iraq and Syria (ISIS) claimed responsibility for the mass shootings and suicide bombings at six locations throughout the city, including the final and deadliest attack at the Bataclan concert hall, where 89 hostages were killed. On Friday evening, President Francois Hollande closed France’s borders and declared a state of emergency. Flights were cancelled, a curfew mandated and the Eiffel Tower closed until Monday, Nov. 16.

Third-year anthropology and psychology double-major and EAP student Danielle Miller lives in the 12th arrondissement of Paris and was unable to access her apartment on the night of the attacks due to a police blockade. Miller said she and a group of friends were able to spend the night at the house of someone she met that night.

“[Parisians] were opening their doors for anyone who needed a place; there was a [#PorteOuverte] going around which means ‘open door,’ so basically if you needed a place to stay you would tweet or post on social media with that hashtag and anyone who saw it would invite you in,” Miller said.

Miller said people in Paris the night of Nov. 13 were “there for each other.”

“Everyone was scared, no one knew what was happening, but that made us all in it together. French or American — it didn’t matter what your nationality was,” Miller said.

Brockert said the gravity of the situation became “real” after she learned there were 100 hostages at the Bataclan theatre.

“Me and my roommate stopped in the middle of the metro station and I almost lost it because it felt really real,” Brockert said. “It didn’t just happen, it was happening right now. People are dying right now and we were a mile away and it became very real.”

Brockert said she had visited Place de la République, a square near where the shootings took place, which is now filled with flowers “stacked feet high” and “hundreds and hundreds” of candles. Brockert said when she was in the square a man stood blindfolded in the middle of the crowd with a sign in French reading “I’m a Muslim, but I’m not a terrorist. We all love.”

Me and my roommate stopped in the middle of the metro station and I almost lost it because it felt really real.
– Maddy Brockert

Third-year political science major and EAP student Cameron Sousa said he and his friends were shaken when they heard about the attacks.

“My friends reacted in similar fashion to my own, with shock, disbelief, and a great amount of sorrow,” Sousa said in an email.

Interim Faculty Director for UCSB Education Abroad Program Professor Francisco Lomelí said violence can happen anywhere and EAP would not dissuade students from going to France in the future.

“You could be in downtown Los Angeles, downtown Chicago or New York. It could happen like it happened in 2014 in Isla Vista. One just never knows, but that’s also part of getting to know that country,” Lomelí said. “It’s part of society nowadays where violence is more rampant and quite unbridled and it can happen anywhere. It’s extremely rare for that to happen in France.”

Lomelí said EAP believes the events in France last week were an “isolated case” and the program is confident students can still safely study abroad in France.

“If there were any imminent dangers, we would not send students. We are very careful as EAP to filter those things — to study those things and to figure out how safe is the country still,” Lomelí said. “If by any chance there were to be more and more attacks on a consistent basis and systematic basis, then EAP would have to re-evaluate.”

Miller said although she and other EAP students have the option to return home, they will stay in France to immerse themselves in the local community.

“We had the option to go home and escape everything going on, but for all the Parisians, this is their home. They don’t have anywhere else to go; they don’t get to just turn away,” Miller said. “We came to embrace the Parisian lifestyle and to become one of them, and we want to be there for them and be just like them.”

Miller said there is a striking difference between French and American mentalities in the aftermath of the attacks, with Americans reacting more cautiously.

“People are purposely going out to the cafés to show they are not afraid,” Miller said. “The Americans I’ve talked to, mostly my parents and professors, are
scared. They want us to stay safe, stay inside and stay away from anything that can be dangerous, which is understandable. But the French want you go to out there and live how you lived and not let this get in the way at all.”

Brockert said Paris has been “resilient” in the days following the attacks.

“The saying that’s all over the city is ‘Même Pas Peur,’ which means ‘not afraid.’ It’s on all the different tributes around the city,” Brockert said. “It basically encompasses what Paris is trying to stand for … to show terrorists, ‘You try to tear us down and inflict terror on the city, and while you might have done that, that’s not going to get us down in the long run.’”

A version of this story appeared on page 1 of the Thursday, November 19, 2015 print edition of the Daily Nexus.

A great article looking at the Paris-event from the perspective of someone who is in Paris and experiencing the human emotions there firsthand.