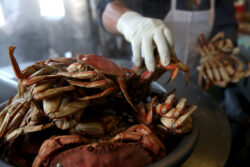 Incidences of poisoning due to the neurotoxin domoic acid from toxic algal blooms have stalled crab season, affecting fisheries, recreation and restaurants.

Crab season is getting a late start this year due to high levels of domoic acid (DA) present in Dungeness and rock crab off of most of the West Coast. From Ventura County to the Oregon border, State Fish and Wildlife services have closed commercial rock crab season and have delayed Dungeness crab season indefinitely from its usual November start.

DA has been found in the body mean and viscera, or internal organs, of the creature at extremely toxic levels. DA is produced by the phytoplankton Pseudo-nitzschia. These organisms photosynthesize similarly to land plants and are native to the phytoplankton communities off the West Coast.

According to Clarissa Anderson, lecturer and researcher in the Institute of Marine Sciences at UC Santa Cruz, there are several possible reasons why phytoplankton release domoic acid, but the exact reason is unknown.

“It may be that the diatom produces it simply as a metabolic byproduct or that domoic acid serves some function, such as to aid competition with other phytoplankton or to ward off predation by zooplankton,” Anderson said.

As it moves up the food chain through shellfish, fish and other marine animals, its bio accumulates to poisonous levels — although, the primary consumers (shellfish) are not susceptible to the neurotoxin. DA poisoning heavily affects sea mammals. Sea lions who have consumed fish with high levels of DA have been seen seizing or bobbing their heads in disorientation. Earlier this year, the Marine Mammal Center rescued nearly 400 California seals and sea lions suffering from distress due to domoic acid. Sea birds can also be affected by DA poisoning because they consume small fish, like anchovies. 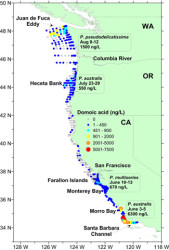 The map shows concentrations of domoic acid present along the California coastline in 1998; these levels have increased since then.

“This year, a large number of anchovies washed ashore in Monterey and had very high, full-body loads of DA, which may have led to their eventual stranding on the beach,” Anderson said.

DA poisoning in humans (also called Amnesic Shellfish Poisoning) also has dangerous effects beyond a 0.5 mg/kg level in the body. Pseudo-nitzschia produce the neurotoxin, which is similar to our amino acid, glutamate.

“In humans and all other vertebrates, domoic acid has the potential to overexcite neurons at glutamate receptor sites since it is such a similar molecule. We call this a glutamate agonist,” Andersen said. “When humans eat any fish containing high enough levels of domoic acid, there is a high risk of developing Amnesic Shellfish Poisoning, which presents first with gastrointestinal distress and can be followed by dizziness, respiratory distress, short term memory loss and even death.”

Blooms of Pseudo-nitzschia have been increasing in frequency and size since 1998, especially in Santa Barbara and Monterey Bay. The blooms have been successful in the warm waters that came up to the coast between 2013 and 2014. The waters are the perfect temperature for the toxic species, Pseudo-nitzschia australis, to thrive — warm enough to keep them from moving away from shore and wreaking havoc on the food web. Although there haven’t been any new observations of DA production, Pseudo-nitzschia australis does not show signs of leaving soon.

“This warm water anomaly in the ocean has been atmospherically linked with the resilient high pressure system that has helped the severe drought persist. In the oceans, though, this warm water has pushed up against the coast and caused the entire ecosystem to change from 2014 until now,” Andersen said. “Now that El Nino is starting to arrive in California in the form of very warm subsurface water and it is happening at a time when the waters are already reaching unprecedented temperatures, it will be very interesting to see how the ecosystem responds. We can say that after the transition to La Nina next spring, another large bloom is very likely.”

The latest round of testing just came in and most areas are showing lower levels of D.A. https://mail-attachment.googleusercontent.com/attachment/?ui=2&ik=c4c5b3046d&view=att&th=1512278dae6c6c0f&attid=0.1&disp=safe&realattid=d777d8a22bb10bfe_0.1&zw&saddbat=ANGjdJ_vlrtUJxoD0j3kjEXMElQRXGNDZoIMeV8EAeX549Hx82KopHSOLpEhZnOMKRke-swEEO_DFVHt0QvK9EzOqb97MY3YNErz-JgctL0nrZ92xFV-ljFF9Wi533P5t2cn4stmx5CPYO1OD60IVNnCQquQuO0eP7H8_mIU0gyQIprDaQTqu36_n9H46-QY1DqXzlbsuZwn5A0QwEAzWvruZKfIEd93r7qR-sy_dJ0Ut_05hFW2JiIMgbO01dTxef4rR3ZJ1JA62ptjLMhOYBwa3OmNy4VdAnOhfZr0S5hlUxw55iT8rPxEFDmCgWBH_XPf6kqC5Z3LHZN-PHCQUwyEawpObolNrTs8B-kAcDV1hAj2aqTa_R8jlSv1gOmmTTqgQt59s5AVHmyQ1eB_bR13zJDsaAcfCyj-lq2wbBayw2Zl3CmigNMNbD4F3EQoEjjdKHnjF7EF8NXOSA8dsTqHI14JI-nhE8-r8drnIHAhud8xOMzAbIRx-DM0X-9ICqnQYmMq-J8-WfizV6HoH-fHz2uM6lgSgIhngDMj0Trtj3RRUQlHFHQgLro66MHGZqUQM1hsVaV1DpOJVzMvhmM1RFvQigxsUqlbd1COGfDCyGK-v8FBuDAuqVCnDDg