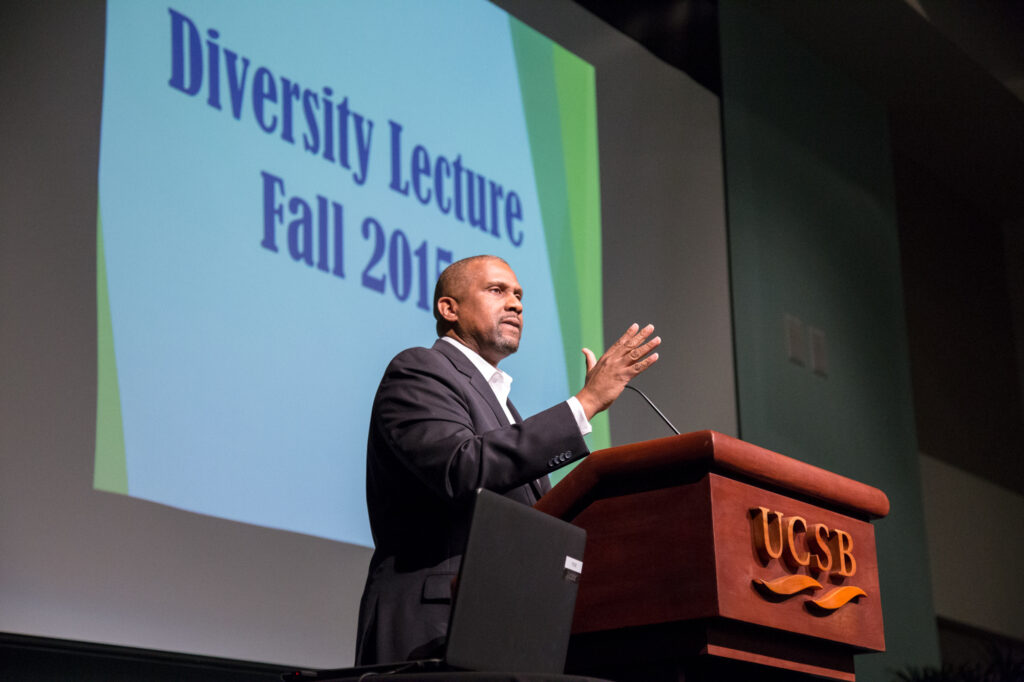 The MultiCultural Center (MCC) hosted Public Broadcasting Services (PBS) talk show host Tavis Smiley on Tuesday as part of its Diversity Series to discuss socially constructed minorities and the relationship between citizens and government in the United States.

Smiley has written and co-authored more than 20 books including #1 New York Times bestseller Covenant with Black America, moderated two live presidential candidate forums in 2007 and was listed in TIME magazine’s “The World’s 100 Most Influential People” in 2009. The talk was presented by the MCC, the Office of the Associate Vice Chancellor for Diversity, Equity and Academic Policy, the Office of Equal Opportunity and Sexual Harassment/Title IX Compliance and the Department of Chican@ Studies.

MCC Director Zaveeni Khan-Marcus introduced Smiley, along with Executive Dean of the College of Letters and Sciences and professor of sociology Melvin Oliver, and said while the MCC Diversity Series was established a decade ago to promote diversity on campus, the series is still “much-needed.”

“The Diversity Series was established in 2005 and was designed to promote discussion, sensitivity and awareness to cover diversity issues on campus and beyond… the purpose of this series continues to be critical,” Khan-Marcus said.

Oliver said he was pleased to welcome to UCSB one of America’s “foremost public leaders.”

“In his latest New York Times best seller, The Rich and the Rest of Us; Poverty Manifest, Smiley and his co-author Cornel West take on the “p” word, poverty, to challenge all Americans to reexamine their description of poverty,” Oliver said.

Smiley said the world is currently facing a critical time in which people must ask difficult questions to address societal problems.

“In many ways, this is a beautiful time to be alive; in other ways, it is a challenging time to consider how we are going to navigate ourselves through the difficulties that we face,” Smiley said.

Smiley said U.S. citizens have a “responsibility” to protect the country from threats to society, giving the example of poverty as an issue needing to be addressed in American society.

“The problem in America is that there’s a huge gap between the promise of America and the possibility in America,” Smiley said. “Poverty is our new slavery. The top 400 wealthiest individuals, 400 Americans, have wealth equivalent to the bottom 150,000,000 citizens.”

Smiley also said humanity is being threatened by racism, patriarchy, ageism and sexism.

Smiley also defended his criticism of President Barack Obama, saying all presidents should be equally criticized.

“I believe in holding all leaders accountable … I will always protect our president, but when he is wrong, I will correct my president,” Smiley said.

Smiley said the current generation of black youth face a more difficult future than that of their parents.

“Blacks over the past 10 years have lost ground … our ancestors must be turning in their graves,” Smiley said.

According to Smiley, effective leadership required putting others before oneself.

Discussing Martin Luther King Jr.’s identification of racism, poverty and militarism and its current relevance in the U.S., Smiley said love is a universally qualifying standard.

“Love means that everyone is worthy just because … that’s it, just because,” Smiley said.