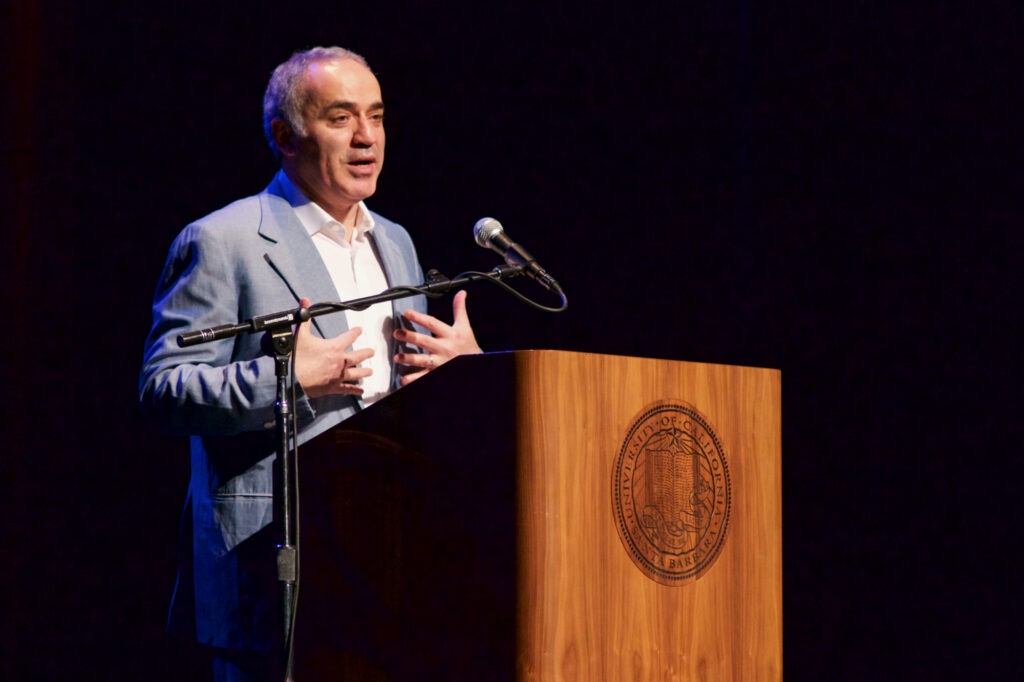 Former World Chess Champion Garry Kasparov discussed his experience leading the pro-democracy movement against Russian president Vladimir Putin in a lecture titled “Winter is Coming: Why Vladimir Putin and the Enemies of the Free World Must Be Stopped” in Campbell Hall Tuesday evening.

Garry Kasparov was born in the Soviet Union in 1963 and rose to international fame at the age of 22 when he became the youngest world chess champion in 1985. He grew increasingly politically active in 2005 and in 2008 ran against Putin in the Russian Presidential race. Kasparov shared about his experience as a political activist and why he thinks Putin is a global threat.

Kasparov said when he began winning chess games, he realized he had a sense of responsibility to his country as a champion to address the political changes in Russia.

“Winning the championship, I had some kind of responsibility,” Kasparov said. “I had to demonstrate to people that when Kasparov won, there was going to be change.”

Kasparov said he does not know what the future holds for the power struggles between Putin and the free world, but Putin will be focused on remaining in power as democracies attempt to compromise with him.

“Putin thinks about survival,” Kasparov said. “The free world is searching so desperately for common ground, democracies are slow to respond and they need strategy.”

[Putin’s] interest is in the opposition of the free world. He can’t afford stability because then he has to compete — he’s a loser.
– Garry Kasparov

Kasparov said he was disappointed with how President George H.W. Bush and President Obama intervened in Russian politics and said Putin has benefited from their “inadequate approaches.”

“Bush did too much, Obama has done nothing,” Kasparov said. “They always believe the Soviet Union after the Cold War could have been better. [Putin] could benefit from that general belief of working together.”

Kasparov said he believes Putin is uninterested in finding common ground with the free world because he knows he will be unable to compete with it.

“[Putin’s] interest is in the opposition of the free world,” Kasparov said. “He can’t afford stability because then he has to compete — he’s a loser.”

Kasparov said he rejects the idea that Putin’s strategy is like a game of chess. According to Kasparov, chess is a game of rules and Putin does not abide by rules.

Kasparov said Putin can be “defeated” when Russian citizens believe he is no longer powerful.

“Putin must demonstrate that he is no longer invincible,” Kasparov said. “The system must look weak in the eyes of his subjects. It’s all about political will that is so far not here. Putin is indispensible because everyone thinks he’s indispensable.”

Kasparov said about “30 percent” of his life is now dedicated to chess, and he enjoys it because it possesses the rules that politics lack.

“It helps keep my brain in good shape,” Kasparov said. “Chess has rules. I feel more confident when I play by the rules.”

Fourth-year history major Audrey Dalton said the most notable topic from the lecture was the idea that “dictators need enemies.”

“I feel that sums up a lot of what [Kasparov] said. That’s why Putin is going to keep persecuting and starting wars in other places because he needs to justify his existence,” Dalton said. “Kasparov clearly has an informed opinion.”

“I had a basic overview, but I don’t know that much about it, so that’s why I wanted to come,” Hernandez said. “I want to know the details of Kasparov’s decision, what he stands for and why is he against Putin.”

Fourth-year German and economics double-major Michael Göpper said he is interested in Russian politics because of Germany’s geographical proximity to Russia.

“About the topic of Russian politics, I think I know quite a lot from reading German newspaper, because Russia’s not too far away from Germany or Europe in general,” Göpper said. “I’m really interested in Russian politics and Russian foreign relations and the issues that are involved in that.”