The Daily Nexus
Music
Azeem X Underbelly to Return to Their Alma Mater
November 18, 2015 at 5:00 am by Artsweek Editor 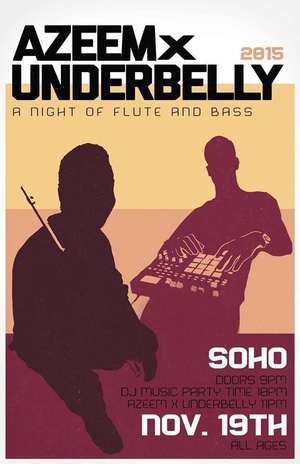 On May 16, the internet enshrined UCSB’s unsuspecting flautist Azeem Ward into web fame in much the same manner of fellow collegiate meme-compatriots “Average College Freshman” and “Lazy College Senior” — sheer luck. Following the overnight sensation of “Azeem’s Senior Flute Recital,” Ward secured a spot on “Jimmy Kimmel.” Shortly after, Ward teamed up with fellow student Timmy Linetzky (DJ Underbelly) for a UK tour spanning across much of England and Scotland. The duo is stateside once again, and they’ll be bringing their special brand of flute and bass to SOhO this Thursday.

Before donning his Underbelly alter-ego, Linetzky was a classically-trained pianist; however, his current musical production style tends to lean to R&B and hip hop. Last year, disillusioned by the stuffy nature of classical music culture, Ward had a similar divergence from his classical roots. As such, the UCSB alumnus began exploring jazz, R&B and the largely uncharted territory of beat box flute. These wonder twins joined forces following solo performances at an open mic event in Isla Vista. They were at least in part drawn together by Azeem’s flute rendition of the infamous techno anthem, Darude’s “Sandstorm.”

Not sure what a flute backed by a DJ set up sounds like? Well, neither did any of the concert attendees following this duo on their UK tour. While abroad, they performed for some crowds nearing close to 5,000 concertgoers, and they’re just now recording their first EP. Most of their pieces are jazz-hop reimagined covers of everything from “Habanera” to Ciara’s “Body Party.” Despite the high variation in genre of selected songs, each reinvention remains consistent in its construction: a strong, kick-drum-driven backbeat that dissipates to make way for high register flute melodies. These Gauchos will be delivering their first public performance in the Santa Barbara area this Thursday at SOhO. Buy your tickets here: nightout.com/events/azeem-underbelly/tickets#.VjKvF2SrQy5