The Daily Nexus
Sign of the Times
Catch a Fire: A Letter from the Bernie Sanders Campaign
November 17, 2015 at 8:20 am by Joanne Murray and Richard Bruce Anderson 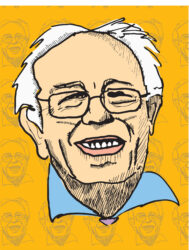 The primary season for Election 2016 begins Feb. 1 with the Iowa caucuses. Long-presumed nominee for the Democrats, Hillary Clinton, gets most of the media attention. But one of the other candidates vying for the Democratic Party nomination is Senator Bernie Sanders of Vermont. His campaign has been a spirited fight against corporate influence and corruption in politics. He speaks for the 99 percent and its struggle against the 1 percent. Sanders first entered politics in 1981 when he was elected the mayor of Burlington, VT. After serving for four terms as mayor, he ran for the at-large Congressional seat in Vermont in 1990 and won, serving eight terms. When a Senate seat opened up in 2006, Bernie ran and won, then was re-elected in 2012 by an astounding 71 percent of the vote. He is a champion of progressive causes, warns against a ruling oligarchy and has built his entire political career on fighting for social and economic justice.

Since launching his campaign on May 26, 2015 in Burlington, Bernie Sanders has distinguished himself by not accepting Super Pac monies. He only accepts small, individual contributions, typically about $35 each. His efforts have raised enough money to remain viable in a campaign in which the Koch brothers will be throwing in over $900 million. Against this backdrop, we see that Sanders now draws thousands and thousands of people to his events and many of those people are not the old guard liberals, but young people — millennials, in college or out of college and coming to grips with a world that seems to be getting harder and colder. Many of them are burdened by student debt, that awful unshakeable millstone that threatens their future. Sanders offers a lot to these young people. His College for All Act calls for public college and university tuition to be free, paid for by a transaction tax on Wall Street (50 cents for every $100 worth of stock and a 0.1 percent fee on bonds). He wants work-study programs to be expanded and the student financial aid application process to be simplified. He has repeatedly called for a restructuring of student debt to lower interest rates and has even brought up the idea of eliminating student loan debt. Sanders’ philosophy of education is that it is a public good, not a private commodity, and as such should be available to all qualified applicants: Sanders states, “We live in a highly competitive global economy, and if our economy is to be strong, we need the best-educated workforce in the world.” These are just some of the reasons young people support a 74-year-old Democratic Socialist.

Because today’s young people are not dumb, they can see that they’ve been screwed. They’ve seen their parents lose their houses. They know that good jobs and viable careers are scarce and getting scarcer. They can see the rapid centralization of wealth and power. They know that their future seems meaningless to the powerful — to the corporations and ultra-wealthy, corrupt politicians. And they know that the future of the world itself is being recklessly endangered by “conservatives” who deny science and global warming. Sanders is succeeding with young people because he’s speaking their language, honestly and from the heart. No focus groups or poll-tested responses needed. Again, these are not dim, unaware people absorbed by their cell phones. They have street smarts — they know when they’re being conned, and they know they’re not being conned by Bernie. Bernie represents the possibility of hope — this, the rarest of commodities these days.

There is an honesty and integrity to the man that is all but completely absent from the current political landscape. Everything has become a game; it has to be sold to the crowd the way refrigerators are sold to the customer. Sanders rejects this notion. Matt Taibbi, a writer for Rolling Stone magazine who has followed Sanders for years in his long career in Congress, says “… He’s not looking for a book deal or a membership in a Martha’s Vineyard golf club … This election isn’t a game to him … he genuinely believes the system is not beyond repair” (“The Case for Bernie Sanders” Rolling Stone, 11/03/15).

Will young people become more involved — will they step up and turn the tide? It’s impossible to know, but there is a huge potential here for Sanders and for democracy. As he reminds us often, “No president, no leader, can do it without the people standing together.” Bernie Sanders has railed against the rising tyranny of the oligarchy which threatens this democracy. We think the new generation, particularly those in college, understand this. They are like a huge bonfire, laid and ready for a match — will it catch fire? We sure hope so.