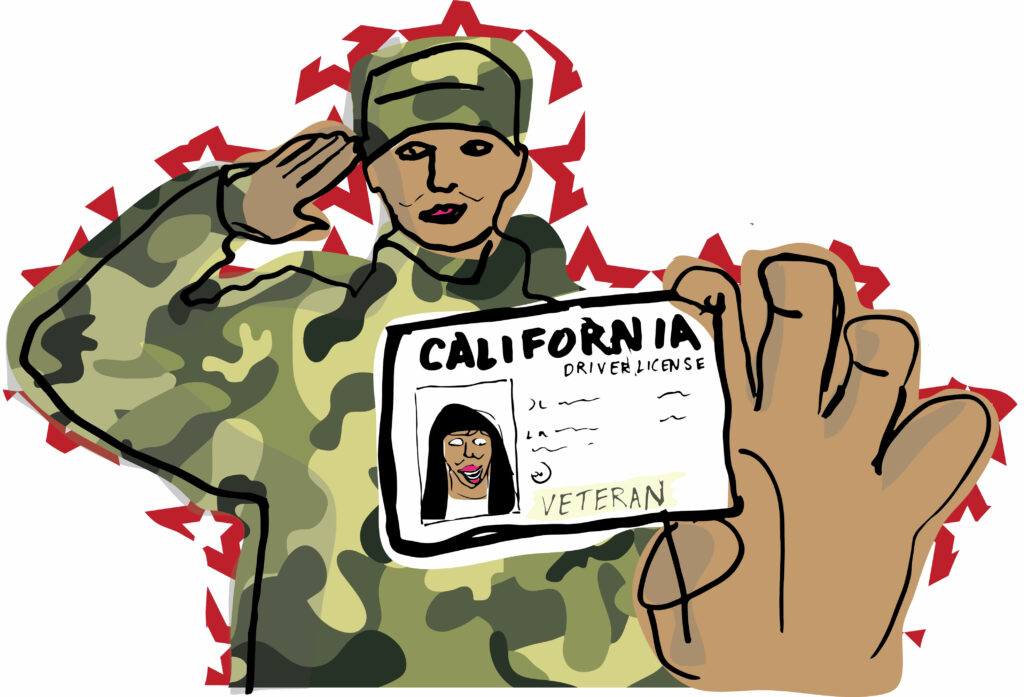 The designated cards would verify veterans’ eligibility to receive state and federal veterans’ benefits without them having to carry a military discharge certificate (DD-214). Veterans can apply for a new driver’s license or ID card by bringing their DD-214 to a County Veterans Service Office and making an appointment with the Department of Motor Vehicles (DMV). The DMV requires veterans to pay a $5 application fee.

According to California State Assemblymember Jim Frazier, who authored AB 935, the bill allows Californians to fulfill their “responsibility” of ensuring veterans are “well-equipped” for civilian life.

“Assembly Bill 935 helps us fulfill that pledge to our veterans,” Frazier said in a statement. “Proof of military service is now literally at the individual’s fingertips, which will help ensure that California veterans are receiving all the benefits they’re rightfully entitled to.”

U.S. Army veteran and engineering graduate student Paul Malone said this legislation frees veterans from needing to have DD-214 certificates on hand in order to enjoy benefits, which he said is a “dumb thing,” because the discharge certificate is a sensitive document, comparable to a birth certificate or Social Security card.

“Most people carry their licenses with them, which makes this a common sense fix to a problem within our community, assuming it is honored as valid proof,” Malone said in an email.

Malone said he worries that California lawmakers will “hang their hat” on veterans’ laws now that AB 935’s has passed.

“There is a lot more to be done just to catch up to other states in terms of what they’re doing for veterans,” Malone said in an email.

UCSB Veteran Resource Center counselor and religious studies graduate student Sam Reid said the new veteran license and ID is ultimately “not that big of a deal” for veterans like himself who already carry a United States Department of Veterans Affairs (V.A.) identification card.

“If I already have the card, I don’t really need the indicator,” Reid said. “It’s a cool thing, but it’s not some revolutionary game-changer.”

Reid said he will add the designation to his driver’s license the next time he renews his license at the DMV.

“I will do that when I renew my license, but I won’t go out of my way,” Reid said.

According to Mondragón, she and her husband once tried to get a free coffee at Starbucks on Veterans Day as part of a promotion, and an employee asked Mondragón for pictures of her in uniform, but did not ask her husband for the same.

“I think it’s an important thing to have, especially for female veterans,” Mondragón said. “I think we have a much harder time being legitimized as veterans.”

Mondragón also said female veterans are less likely carry alternate forms of identification offered by veteran organizations such as the V.A., the Veterans of Foreign Wars or the American Legion, as they often avoid these organizations because they are “saturated with men.”

“A lot of women veterans don’t like to be around that many men anymore, especially if we’re the only ones amidst a thousand men,” Mondragón said.

Mondragón said her biggest concern is that the DMV is charging veterans to apply to add the designation, which she said seems like a “profiteering” scheme.

“They’re going to make a profit off of what we thought was inherently a necessity in our community,” Mondragón said. “You’re going to have all these veterans pay to let people know that they’re veterans. That’s the part that I just am in complete disagreement with — I think it should be free.”

Ga does this and it’s free

Why should we pay for this. We served our Country, it should be automatic