The Daily Nexus
News
International Students Host Vigil for France
November 15, 2015 at 9:59 am by Effie Sklavenitis 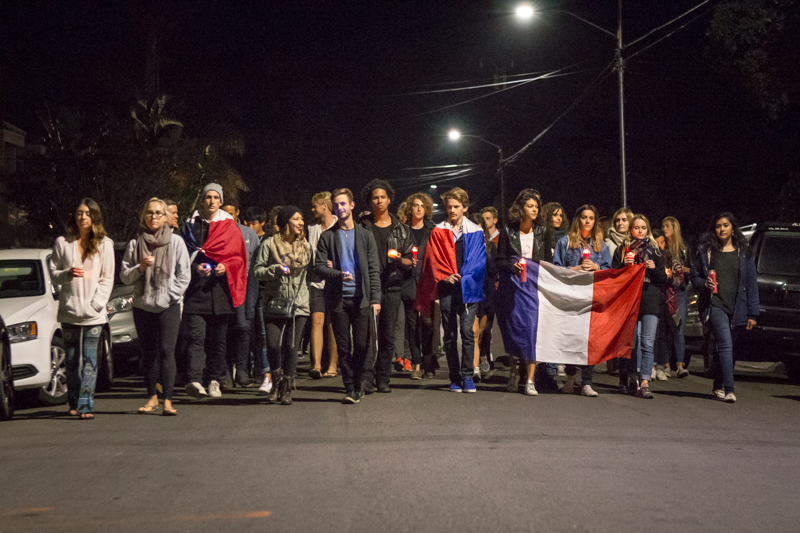 International student from France Candice Farel hosted a vigil Saturday night to mourn the lives of the approximately 129 people killed in Paris on Friday in terrorist attacks by the Islamic State also known as ISIL or ISIS.

The event was held at fourth-year political science major Farel’s home on Del Playa Drive where approximately 50 people attended to honor the victims of the attacks. Attendees carried a French flag and walked to the end of the street to release a lantern over the ocean.

Farel said she organized the vigil for individuals affected by the attacks to come together.

“We needed to do something to wash the pain from us, but also to show that even if we’re not in France, we are still here,” Farel said. “It was important to us.”

International student from France and third-year global studies major Toki Awonuga said people need to “stand united” against terrorism and not blame attacks on any religion.

“There is no religion, not the Quran, not Christianity, not Buddhism, not any religion that allows murdering, killing and such actions,” Awonuga said.

Farel said terrorism is something society needs to “conquer.”

“We have to show a message of peace to show everyone that terrorism is just a small piece of a bad thing,” Farel said. “We are numerous, we are the masses and we are here to protect our rights.” 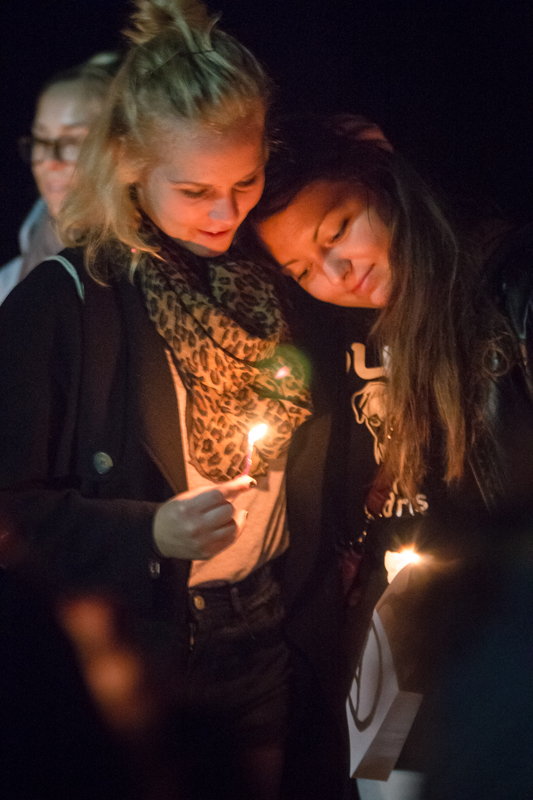 A student offering her shoulder to her friend. Stephen Manga/Daily Nexus

International student from France and third-year gender studies major Mayalen Etcheverry, who helped organize the vigil to help foster solidarity with France in I.V., said it is difficult being so far from France as the country recovers from the attacks.

“We want to create a bubble with anybody who wants to come in just to support all the people who got touched by these attacks and to feel as if we are home with our loved ones,” Etcheverry said. “We needed to do something.”

Farel said the vigil was meant to honor not only the victims of the Paris attacks, but all lives lost to acts of terrorism.

“We represent everyone,” Farel said. “This is not just about France.”

International student from France and fourth-year statistical science major Maxine Lefebvre said violence like that which occurred in Paris on Friday is a reality for many people living in parts of the Middle East.

“Let’s not forget that some people in Syria and Iraq are living this every day for years. We need to care,” Lefebvre said.

Lefebvre said any of the French international students studying at UC Santa Barbara could easily have been in or near the 10th arrondissement and 11th arrondissement of Paris where the attacks occurred.

““There is no religion, not the Quran, not Christianity, not Buddhism, not any religion that allows murdering, killing and such actions,” Awonuga said.”
++
Then why did Mohammed and his warriors do it all the time?

Quit making excuses for a murderous religion. Read the Qur’an and hadiths so as to understand the true nature of Islam and of its murderous prophet.

You have got to be shitting me. Have you actually read the Quran? It promotes peace and love, just like the Bible. Have you failed to see what Christianity has done in the sake of their God? The crusades, the missions established in North America to “bring religion” to the Native Americans, the KKK who were opposed to non-white and non-christians. You do realize that the terrorists are EXTREMISTS, just like other people in other religions. Your thought process is repulsive. A hostage held by ISIS said they didn’t even have the Quran. The religion is a murderous one- the… Read more »

The Quran contains at least 109 verses that call Muslims to war. How many such similar verses did Jesus (the man) speak of? I don’t wish to place any theological argument in a hierarchical class in light of the fact that none of them empirically can ever conflict with the scientific axiom of mass conservation: matter is neither created nor destroyed but merely changed in form. This was proven in experimentation by a Russian in 1756. This is the preeminent Nexustential challenge facing you all collectively here @UCSB in the future–how to effectively bridge the gap between science and religion… Read more »