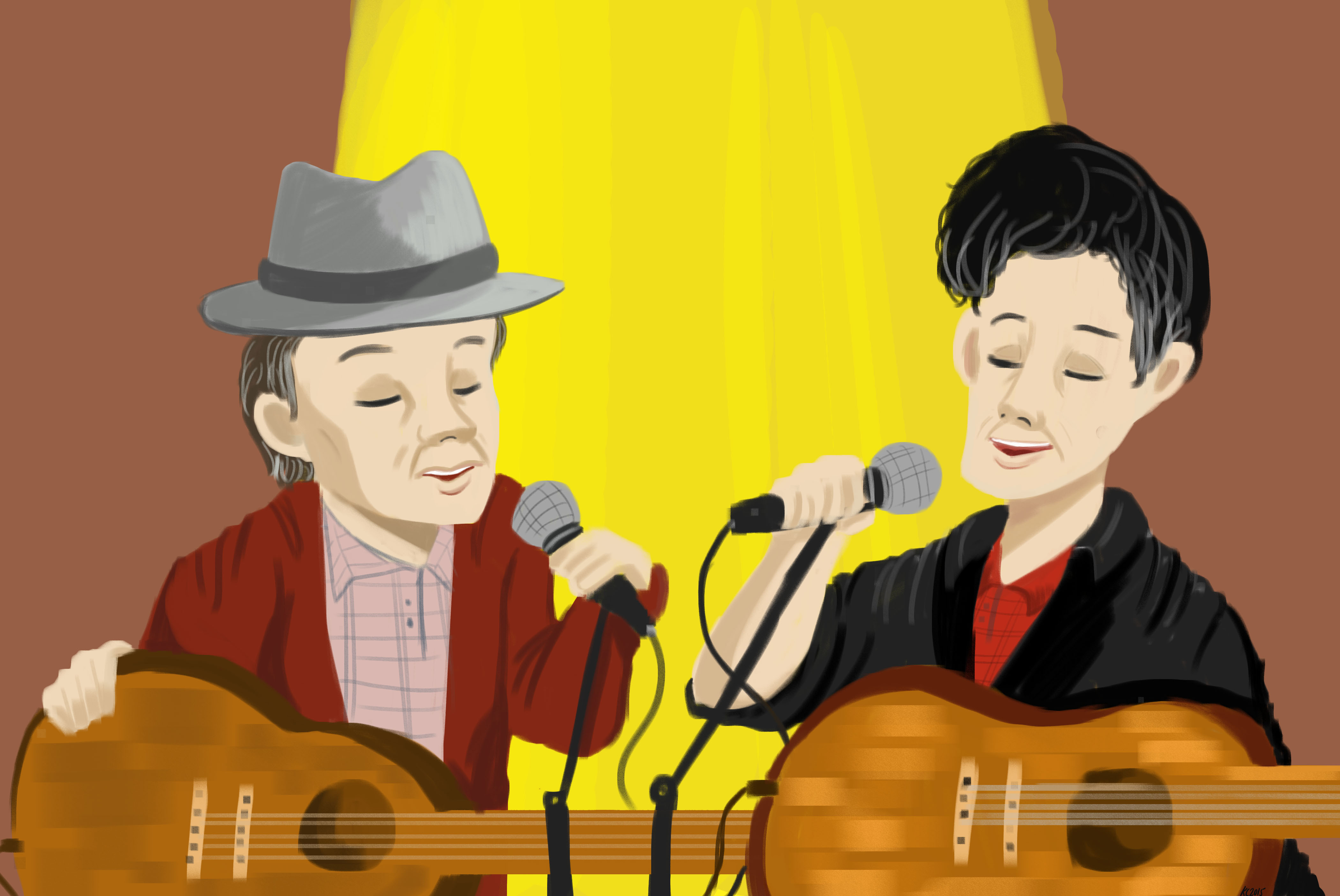 On Saturday night, Campbell Hall had a far different atmosphere than the average freshman lecture. The backpacks had been replaced by designer purses. The full heads of hair and wispy no-shave-November efforts had been replaced by bald heads and mature white mustaches. The innumerable Hawaiian shirts remained (it’s still Santa Barbara), but some had the tasteful addition of bolo ties. This aged crowd filed in from across Southern California to see the singer-songwriter legends Lyle Lovett and John Hiatt.

Hiatt was justified in referring to their tour as “our little Smothers Brothers comedy show.” Escorted by an entourage of guitars and microphones, the duo spent about as much time playing as they did bantering and killing the crowd with wholesome adult humor. The banter wasn’t exclusively verbal — during each solo it seemed as though the musicians were communicating to each other in a way that no one but Lovett and Hiatt could fully understand. This comfortable back-and-forth made it clear that the two were close friends both on and off the stage.

Lovett, a four-Grammy-winning Texan, was soft-spoken and quick-witted. Every time Hiatt went off on a tangent and lost the crowd, Lovett interjected a quick one-liner and started a song. His lyrics were beautiful and diverse — some were drowned out with the laughter they elicited and others were magnified by the tearful silence that befell the crowd. During Lovett’s powerful final song, “If You Were to Wake Up,” even Hiatt missed the cue for his solo to wipe his eyes. With his endearing crooked smile and sharp wit, lady-killing Lovett met the audience’s high expectations.

Hiatt, a Hoosier who grew up on IndyCar and Bob Dylan, had the larger personality of the two. Frequently bringing his singing down to a scratchy, throaty monologue or embarking on a Dylan-esque harmonica solo, Hiatt made his bravado known. It worked. The biggest applauses of the night were following these avant-garde displays, the peak of which was a two-part “bebop whistling” solo during Lovett’s “She’s No Lady.” His musical risk-taking was only a reflection of his own character — he supposedly stole a Thunderbird as a child and had brief stint in jail. Hiatt is his stage presence personified.

To quote Lovett quoting Townes Van Zandt: “There’s only two kinds of music: the blues and zippity doo-dah.” The show had its fair share of both blues and zippity doo-dah, and plenty of songs that seemed to blur the line. Hiatt first wowed the crowd with the crowd favorite of the night, “Adios to California,” only to have the show immediately stolen back with Lovett’s “Give Back My Heart.” Hiatt’s other blues hits of the night were “Drive South” and his encore “Have a Little Faith in Me.” The best zippity doo-dah song of the night was Hiatt’s “Tennessee Plates,” an outlaw song that is only just beyond autobiographical for a man of his background.

Lovett’s best blues were the aforementioned masterpiece “If You Were to Wake Up” and “L.A. County,” a song which he followed with his best quip of the night: “Sometimes you care about someone so much you realize they just can’t live without you.” Lovett also lightened the mood with “She’s No Lady” and “Church,” a song that genuinely encapsulated his southern roots.

Some of the best performances of the night were the duets “White Boy Lost in the Blues” and “Thing Called Love.” The distinct styles of both men coupled harmoniously and their guitar battle was a saga of two masters of their craft, limited not by their skill but purely by their own creativity. Hiatt belted out a series of perfectly pitched hollers as Lovett fingerpicked a freaky fast folky fantasy, the combination of which left the crowd standing in full applause.

On the second to last leg of their tour, the genial pair seemed to enjoy themselves more than anyone else in Campbell, with a few inside jokes thrown in just for their own enjoyment. After the show, Hiatt asked the crowd for donations to WorldVision, and there was even a bidding war for a Lovett-Hiatt signed guitar to support the cause. The proceeds would go to providing rural African villages with clean drinking water. Fully satisfied, the crowd was very generous, and the high spirits felt as the crowd marched out captured the atmosphere of the night.

What a peaceful, fun evening. They ended the concert on a real “high note” with the signed-guitar auction to benefit the needy. So typical of Americans–our values & our lives–pleasant, enjoyable music, caring, generous hearts, and a well-written piece to solidify the memories of the night.