The march was the largest protest on UCSB’s campus in recent memory and stoked the embers of other activist movements: many students wore black to show solidarity with University of Missouri protesters, sported Bernie Sanders pins or held up Black Lives Matter signs. Approximately a dozen organizers labored to direct the larger-than-expected crowd as they marched from Storke Tower to Cheadle Hall and back while documenting the march on social media. At one point, students began banging on the windows of Cheadle Hall, an administrative building, before organizers directed them back on the planned route.

We talk about UC Berkeley and UC Santa Cruz as being these places with strong activist spirits, but I think we proved today … that [UCSB is] every bit a part of that legacy of student activism.
–A.S. vice president for statewide affairs Mohsin Mirza

Associated Students (A.S.) student advocate general and fourth-year global studies and art double-major Joseline Garcia, who helped organize the event, said she was surprised by the turnout, but not the students’ passion.

“Whether it was big or small, I expected [students] to be passionate, and I think it exceeded my own expectation,” Garcia said. “I think we made a moment today on this campus.”

Garcia said the organizers wanted to send a message that people should have the right to graduate college without student debt. 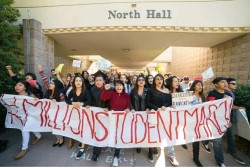 “Our goal was to start a conversation regarding all these issues: free higher education, $15 minimum wage and no student loan debt,” Garcia said. “We have the right to be able to live and prosper and be happy, and we have a right to graduate without student loans and invest in our own future.”

In a statement released Thursday afternoon, UCSB Chancellor Henry T. Yang said he supports students and sees the need for a “vital dialogue” on how to make public higher education accessible.

“We will continue to send a strong message to our elected officials about the value of the University of California and the need to keep higher education accessible and affordable to all Californians,” Yang said in the statement.

A.S. vice president for statewide affairs and fourth-year black studies and sociology double-major Mohsin Mirza said organizers were nervous about how many people would attend the protest until hundreds of students arrived on the steps of Storke Tower at noon.

“We were all nervous about how many students we could get to turn out to make this statement,” Mirza said. “It was all about making the loudest statement possible that we, as a generation, agree with these three demands.”

Once a few hundred students gathered, organizers led the march across campus as administrators and students looked on. Protesters implored students to “walk out” of classes, and by the time the crowd reached Campbell Hall, more than a thousand students had joined the march. 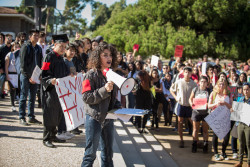 “We talk about UC Berkeley and UC Santa Cruz as being these places with strong activist spirits, but I think we proved today … that [UCSB is] every bit a part of that legacy of student activism,” Mirza said.

“There’s been some really big student protests at other campuses, and it seems to me like UCSB has been pretty small to negligible,” Swift said. “This is the first time I saw such a massive outpouring of protest from UCSB students concerning tuition and education.”

Swift said she felt she was the “most senior” person in the march, and wished that more faculty members had attended.

“I think it’s incumbent upon the professors and the adjuncts and the educators here to come show support with students,” Swift said. “If I’m going to really put my money where my mouth is and be a true educator and teacher, I have to support students.”

I’m carrying massive amounts of debt right now and, in fact, I get no support from my department. I’m just basically dealing with student loans now, and it’s going to kill me.
– Education Ph.D. candidate Kathy Swift

Swift said the protesters’ demands would benefit her greatly.

“I’m carrying massive amounts of debt right now and, in fact, I get no support from my department,” Swift said. “I’m just basically dealing with student loans now, and it’s going to kill me.”

While posting “#DoUCMyDebt” signs on Cheadle Hall, students began pounding on the windows before organizers redirected the group back towards Storke Tower. One protester voiced her disappointment that activists did not occupy one of the buildings on campus.

A.S. assistant director of community affairs and fourth-year political science and history double-major Jared Daniels helped organize the march and said he could not rule out “occupy movements” in the future, but said Thursday’s march was about sending a message to administrators.

“It’s like a poker game — you don’t want to throw all your cards and chips out on the table when you get a good hand,” Daniels said. “We have a really good hand right now. I think that there will be a time to occupy if [administrators] don’t take us seriously this time.”

Co-chair of UCSB’s Black Student Union and fourth-year black studies and sociology double-major Jamelia Harris said it is the state of California’s responsibility to make sure all students can attend college. 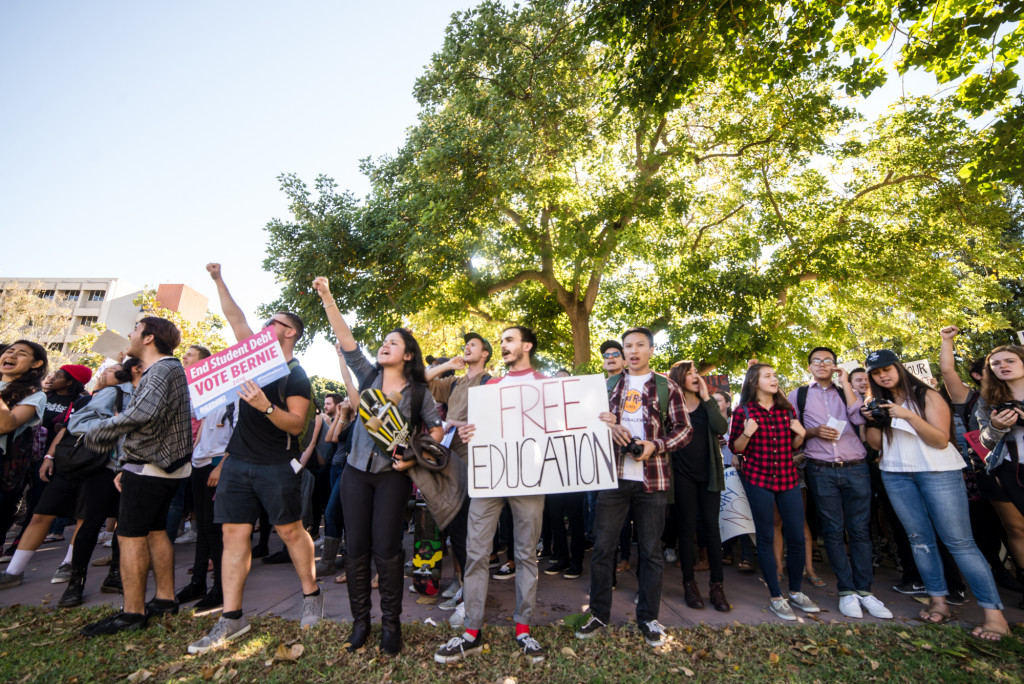 “The failure of our state’s public higher education system to enhance accessibility and diversity initiatives — especially for black students — must be remedied by an increase in state funds and a decrease in classist, exorbitant tuition expenses,” Harris said. “The burden of improving our public higher education system should be on the state of California as opposed to us students and our families.”

“The state, for whatever reason, has reneged on their commitment to higher education, while at the same time investing heavily in the prison industrial complex, and that’s a very stark example of the prioritization of the state,” Jones said. “What I observed here is the continuation of a movement to really put the public back as priority.”

To see not only so many people on our own campus but across campuses, so many people on Facebook liking, sharing, changing their profile pictures, news articles being posted about this, it’s absolutely amazing. I think that we’re part of history. This is living history.
– A.S. off-campus senator Akshaya Natarajan

Jones said the Million Student March movement comes at a key time with the 2016 presidential election less than a year away.

“This kind of mobilization across the country at this particular point in time really can serve as a tipping point for state and national political debate and prioritization,” Jones said.

According to Jones, the UC-wide undergraduate tuition freeze, announced in May, was strategically timed to coincide with an increase in tuition for graduate and out-of-state students.

“I find it as a means by which to really pit one part of our community against the other,” Jones said.

“Ask any economist, except for a fringe Marxist, and they will tell you that is not feasible,” Garshfield said. “Three years ago, I held the exact same views, but none of the stuff is feasible, and none of this is going to happen, and it’s a waste of energy.” 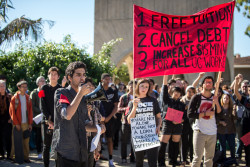 Mirza said marches across the country Thursday were the beginning of a larger movement.

“I’m hopeful that we’ve made an impact and that people are going to be talking about this across campus and across the state and country, but I’m also ready to do a lot more,” Mirza said.

Associated Students off-campus senator and second-year Asian American studies and political science double-major Akshaya Natarajan said she was excited by the national impact of the march.

“To see not only so many people on our own campus but across campuses, so many people on Facebook liking, sharing, changing their profile pictures, news articles being posted about this, it’s absolutely amazing,” Natarajan said. “I think that we’re part of history. This is living history.”

Garcia said State Sen. Hannah-Beth Jackson recently asked her if she will attend law school, and Garcia replied she was unsure if she can afford it.

“I have two younger brothers who also have dreams that I have to think about,” Garcia said. “My father’s a gardener and my mother’s a housekeeper — they don’t make a lot of money. I’m in a position where I have to think about other people’s futures as well and determine how much I can invest in mine.”

The march demonstrated a re-emergence of student mobilization that has historically driven fundamental change in society, according to Jones.

“Perhaps the stark realities of being priced out of higher education or being saddled with five or six-figure debt is enough to motivate more people to say ‘this is not right’ and to do something about it,” Jones said.

It seems to me that the marches are conflating several concepts. First, a right has nothing to do with the government giving them “free” stuff. A right is a guarantee of a freedom for which the government will not infringe. So, nobody has a “right” to a free education, at least not in this country. Secondly, there is no such thing as free. Whether the “protesters” understand this or not, what they are marching for is for the government to forcibly take one person’s money and then provide it for the benefit of themselves. A degree is not something anyone… Read more »

This interview with one of the national organizers of the march has very little grasp of economic principles. But nvm, because in today’s society, it’s all about solidarity, signing petitions, and getting people in authority to give into demands. Yay, us!

I can’t wait until these geniuses try to bully Yang out of his job when he fails to magically pull a billion dollars out of his ass.

No one wants to hear from Jason Garshfield

From “reason”:Rather, an education, and the degree that results from it, should have an economic component to it. IOW, will the education pay for itself in the long run? If the education becomes “free”, then market forces no longer factor into the equation which means we’ll end up with an over-abundance of people with psychology, art history, chican@ studies, sociology, etc majors who will be whipping up my latte at Starbucks. You are conflating things. An education is a value into and of itself. It is a privilege (not, a right — I agree) to both the person and a… Read more »