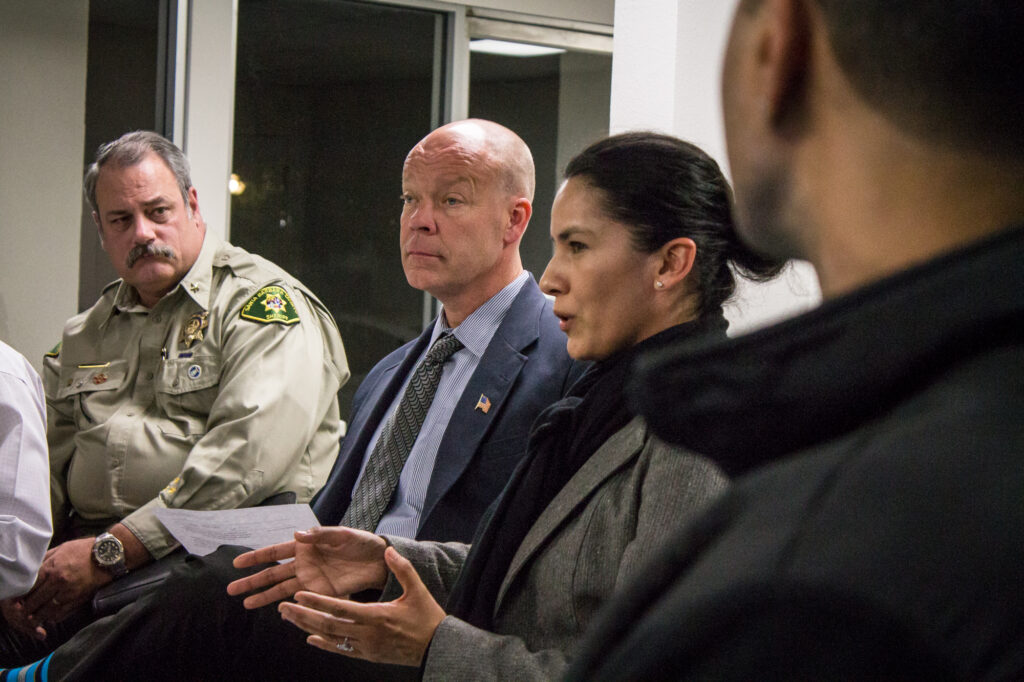 The efforts to increase lighting on busy streets, as well as suggestions to lengthen sidewalks around I.V., aim to make the roads as safe as possible for pedestrians. Alex Payne/Daily Nexus

Residents will vote in November 2016 on whether to approve the formation of a Community Services District (CSD) in I.V., governed by a board of local representatives and funded by a Utility Users Tax. Tuesday’s meeting was the fourth in a series of 11 weekly meetings the Initiative organized for I.V. stakeholders to discuss the specific framework of the CSD.

Attendees lauded the recent lighting improvements in I.V. and discussed areas that could use more lighting, such as local parks. There were also talk of adding sidewalks to both sides of Del Playa Drive and other streets with high amounts of pedestrian traffic.

County of Santa Barbara Public Works director Scott McGolpin said his department wants to add sidewalks to more areas in I.V. but there is a lack of funding.

“The goal is to get continuous sidewalk throughout I.V.,” McGolpin said. “Partnerships make our projects successful.”

Community Organizer from Das Williams’ office Darcel Elliott said under the proposed CSD, money for public works could be allocated for lighting parks around I.V., falling under the jurisdiction of the I.V. Recreation & Parks Department.

“We are always open to feedback,” Sneddon said.

Responding to inquiries about solar lights, Sneddon said there are already solar-powered lights around Goleta by the bluffs, but they do not stay on throughout the entire evening and are not ideal for popular streets like Del Play Drive.

Sneddon said his goal is to have continuous sidewalks on both sides of Del Play Drive and Sabado Tarde Road, the streets with the most pedestrian traffic and also to update existing sidewalks to comply with the American Disability Association standards.

According to Sneddon, gas lines and water meters create obstacles and slow down the sidewalk installation process.

“You should be seeing smaller pockets of work going on throughout the year,” Sneddon said. “There will be some bigger projects when we can do a whole block at once.”

Sneddon also said Sueno Road, which is known for having cracks in the pavement, will be resurfaced this year.

“It’s just a matter of providing the funding and supplies,” Aguilera said. “We already have the infrastructure.”

UCSB professor of art Kim Yasuda said the CSD could save money by preventing graffiti with projects like murals.

“If you invest upfront, you can offset costs on the other end,” Yasuda said.

A version of this story appeared on p. 4 of the Thursday, Nov. 12, issue of the Daily Nexus.

If our nations federal government would stop wasting trillions of dollars fighting wars of aggression against foreign nations, they might be able to afford to give Isla Vista the money needed to pay for desired community improvement projects.

If you would like to see what those wars are doing, not just to our federal governments budget, but also to the lives, health, and families of our worlds people, feel free to visit the following webpage: