The Daily Nexus
Sports
Gauchos Make Season Debut on the Road at Washington State, Face Idaho on Sunday
November 12, 2015 at 5:06 am by Sean White

Twenty-four: That is the number of losses the UCSB women’s basketball team endured before winning its first game last season. 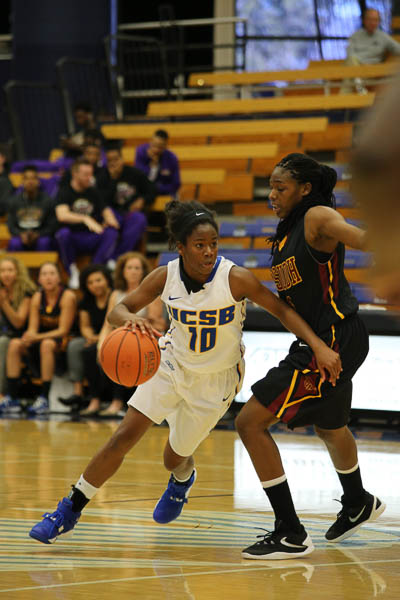 Onome Jemerigbe races down the court past the opponents’ defenders. Jenny Luo/Daily Nexus

It is expected that last season’s struggles will constantly be compared to the team’s performance this year, but the Gauchos are fully committed to rebuilding as they prepare for their season opener this Friday at Washington State.

“We don’t talk about last year,” Head Coach Bonnie Henrickson said. “We focus on the process, not the result. If we get caught up in winning and just talk about the outcome, then where’s the time spent on boxing out, ball side denying shooters and focusing on screens? I want them focused on that because that gives us a chance to be successful.”

Following the team’s start to the 2015-16 season, Santa Barbara will end its road trip with a game at Idaho on Sunday.

After just one exhibition game, a 70-67 loss to Cal State Dominguez Hills, it’s uncertain if the Gauchos have had enough time to make the correct adjustments before stepping onto the court. Certainly, limiting turnovers and improving at the free throw line were areas of focus in this week’s practices.

“We shot 43 percent, you can beat a lot of people shooting 43 percent. The problem is we didn’t get enough shots,” Henrickson said. “The free throws are a confidence thing and you have to earn your confidence.We’ll get better there but we’ve got to take care of the ball and not turn it over.”

While it will be Bonnie Henrickson’s official debut as UCSB’s head coach, it will be a rematch between the Gauchos and Cougars. Last season’s meeting resulted in an 81-55 Washington State victory over UCSB in the Thunderdome.

Despite the lopsided defeat, UCSB trailed by just seven points, 28-35, at halftime. With the losses of former All-Pac-12 guards Lia Galdeira and Tia Presley, both of whom are pursuing professional playing careers overseas, the Washington St. lineup has lost a significant portion of its scoring.

When combined, Galdeira and Presley averaged 36.7 points and 9.5 rebounds per game and had a total of 172 steals last season. The two scored 45 of the team’s 81 points against UCSB and Galdeira registered a game-high four steals. Apart from the former backcourt, no other WSU player averaged double-digit points per game.

The Cougars, however, seem to have a solution for the absence of the guards after a 79-37 exhibition win over Lewis-Clark State College this past Sunday. All 14 of the players on WSU’s roster scored, while freshman forward Borislava Hristova recorded a game-high 14 points on 5-of-10 shooting, two-of-three from behind the three-point line.

UCSB had the size advantage in its exhibition bout versus Cal State Dominguez Hills on Sunday, but will be challenged by the height of the Cougars. A total of seven players stand 6 feet and taller for WSU, the tallest being sophomore center Bianca Blanaru at 6 feet 5 inches.

However, after shooting 11-of-12 from the field for 22 points and grabbing a game-high eight rebounds in her collegiate debut for UCSB, it may take more than size to contain freshman forward Kali Jones.

Her ability to post-up and use her power in the paint along with her soft release when shooting the short jump hook or finishing at the basket with a layup could be the difference in overcoming the Cougars’ tall frame on defense.

Jones came off the bench in UCSB’s exhibition loss, playing 29 minutes. Due to an ankle injury, Jones did not start in the Gauchos’ preseason game on Sunday but still managed to play and  will be ready to start for Friday’s season opener.

“We didn’t know until shootaround that morning that she would even play,” Henrickson said. “She hadn’t practice all week because of the ankle. She would have started had she not had the ankle issue because she has been the most productive big.”

In addition to her play, UCSB’s ability to convert points off turnovers will be pivotal, as the Cougars had trouble handling the ball in their exhibition victory, recording 22 turnovers.

Another chance at redemption presents itself in UCSB’s visit to the University of Idaho this Sunday.

Last year’s contest nearly went into overtime, but ended with a UCSB turnover and two makes at the free throw line by former guard and current member of the Perth Lynx, Stacey Barr, who scored a game-high 20 points for the 47-44 Idaho win.

The Vandals faced Lewis-Clark State College on Friday, routing the Warriors in a 93-58 exhibition victory. Idaho was spot on from three-point distance, draining 41.7 percent on 15-of-36 shooting from behind the arc.

Senior guard Connie Ballestero led all players in scoring and assists with 17 points and six helpers. She shot four-of-seven from the field, all of her made field goals being three-pointers in which she attempted five from long distance.

The three ball proved to be the difference in last season’s meeting between the two teams. While Idaho made just 9-of-25 of its attempts from the perimeter, UCSB recorded a 7.1 three-point percentage on 1-of-14 shooting from deep.

The Gauchos made 25 percent of their three-point attempts on Sunday. UCSB’s offense does not revolve around perimeter shots but being able to sink some from long distance would definitely be helpful.

However, the Gauchos must find a way to defend the three ball and keep the Vandals off the perimeter. While this will be no easy task, Santa Barbara’s mindset suggest otherwise.

“We know the feeling of last year,” senior guard Jasmine Ware said. “We have good intensity and a competitive mindset, just looking at the scouts and knowing the players. Not giving up points in transition and being able to stay down and guard someone one-on-one, that’s the big thing we’re working on.”