The Daily Nexus
Volleyball
Gauchos Confident Heading into Rematches After Success Earlier in Season
November 12, 2015 at 5:05 am by Sean White

Since earning its first two Big West Conference victories against UC Riverside and Cal State Fullerton in back-to-back contests on Oct. 16th and 17th, the UCSB women’s volleyball team has come up short in its last five matches. Prior to its last two victories, Santa Barbara had been on an 11-match losing streak.

The Gauchos look to end their latest slump against two familiar conference opponents, facing Cal State Fullerton in a primetime ESPN3 matchup on Friday and UC Riverside on Saturday.

“It already gives our team some confidence going into the weekend because they can fall back on the success they had against them [CSUF & UCR] the last time,” Head Coach Nicole Lantagne Welch said. “But at the same time, we have to appreciate that the teams have gotten better and improved over the season. We need to be ready for a stronger opponent especially playing in their home gyms.” 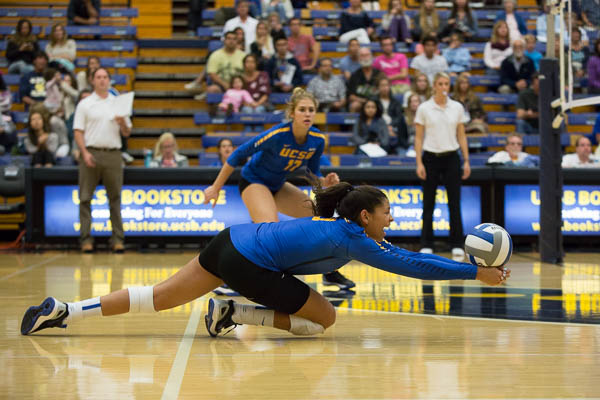 UCSB looks to improve its 6-17 overall, 2-10 conference record. Despite earning victories over the Titans and Highlanders in previous meetings earlier this season, the Gauchos have struggled when playing on the road and are 1-6 in away matches.

The troubles for Fullerton continue to pile up as it remains winless this season. CSUF is 0-24 overall and 0-12 in conference play. Dating back to the end of last season, the Titans are now on a 27-match losing streak.

Still performing at a high level for the Titans is junior outside hitter Paige Reed. Overall, she ranks fifth in the Big West in digs per set with a 3.95 average. Since the start of conference play, she has moved up to fourth place, averaging 4.26 digs per set. She leads Fullerton in digs with 179.

With regard to teams getting better, the gradual improvements throughout UCR’s season have resulted in some historical highlights for the Highlanders, who are 9-16 overall and 4-8 in conference matches. For just the fifth time in program history, Riverside won back-to-back Big West matches with their five set victory over Cal State Northridge and sweep of CSUF last weekend. Its nine overall wins is its most since 2005.

Most notably, the sweep of Northridge handed UCR its fourth conference win of the season, tying its program record for Big West wins.

Despite earning the 3-1 victory, Santa Barbara’s offense seemed to be a little disheveled by the Highlanders’ defense, having finished the match with a .152 hitting clip.

“We need consistency,” Lantagne Welch said. “A lot of that stems from our serve-receive and our passing. Riverside is a really good defensive team. We’ll be more ready for that this time. If we’re passing the ball well, we’re going to have opportunities to score.”

Improvements on the defensive end will be important for UCSB as well in hopes of containing the Highlanders’ senior outside hitter Helena Peric.

She recently earned Big West Offensive Player of the Week honors after a phenomenal performance against CSUN. She tallied a career-high 23 kills and had 12 digs for her second double-double of the season to go along with a .308 hitting percentage. She continued her dominance with 15 kills, six digs, two service aces and a .379 hitting clip against Cal State Fullerton.

The Gauchos’ containment begins at the net, a component of their defense in which they have excelled.

Santa Barbara’s average of 2.10 blocks per set ranks third overall in the Big West. In three of its last four matches, UCSB has registered double-digit blocking totals. The centerpieces to the Gauchos’ denial at the net are junior middle blockers Phoebe Grunt and Elizabeth Sheffield.

While UCSB was unable to find much success offensively in its first match versus UCR, it did respond with a .302 hitting night against Cal State Fullerton the following night. The Gauchos’ confidence helped carry them to a strong attack but they must find that same determination when they are out of sync as well.

“It comes and goes,” Lantagne Welch said. “When we’re doing well, we’re very confident. When we struggle, we lose it too quickly. That’s something about getting tougher in that scenario and knowing that teams are going to make big plays and we’re going to mess up some. That’s okay, it’s just we need to respond right away.”

ESPN3 will nationally broadcast the match between UCSB and Cal State Fullerton this Friday, Nov. 13th at 4:30 p.m. The Gauchos will bring their weekend to a close at UC Riverside on Saturday, Nov. 14th at 7:30 p.m.