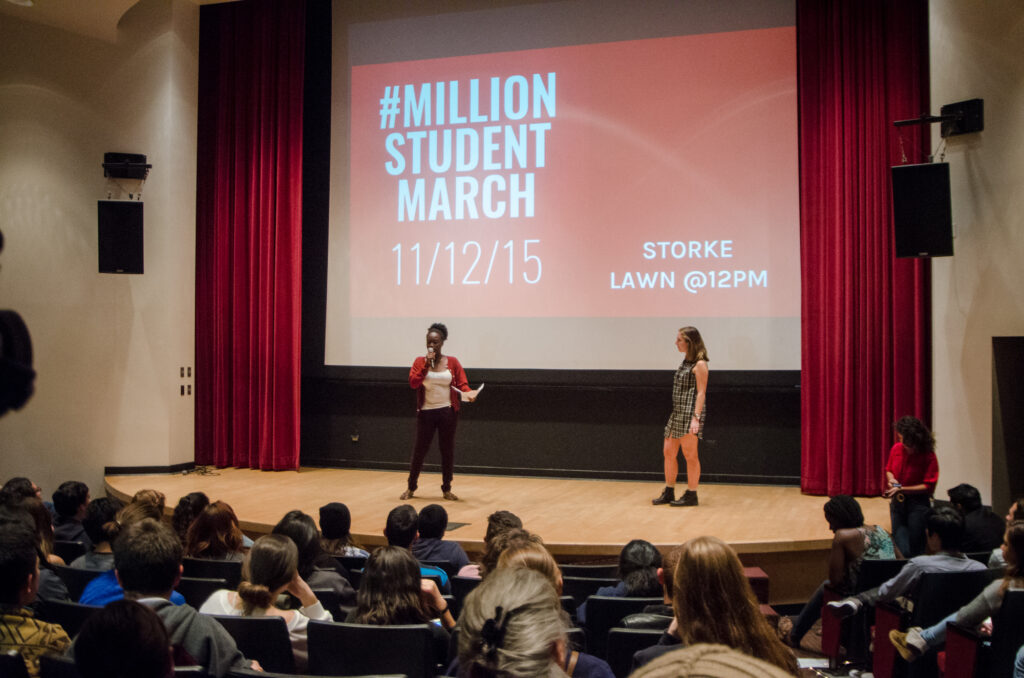 Accessible, Attainable, Affordable Coalition UCSB (AAAC) will host #MillionStudentMarch Thursday beginning at Storke Tower to demand tuition-free public colleges, the cancellation of all student debt and a $15 minimum wage for all campus workers.

The march, which will begin at noon, is part of a nationwide movement including all UC campuses and over 90 other colleges and universities. AAAC is organizing the event with the United States Student Association, the Associated Students (A.S.) Office of the External Vice President for Statewide Affairs (EVPSA), the A.S. Office of the Student Advocate and UCSB-4-Bernie.

Event organizer and second-year mathematics major Kyle Butts said the UC Board of Regents treats the University as more of a corporate entity than an academic institution, beginning when Ronald Reagan became governor of California.

“Reagan ushered in an era of neoliberal thinking in California while he was governor,” Butts said. “That coupled with 17 Regents being business men who serve 12 year terms and only one student Regent, it is pretty clear that the UC is a business now to them.”

According to Butts, the march will partially address how the 1960 California Master Plan for Higher Education, which reaffirmed California’s prior commitment to the principle of tuition-free education, has been abandoned.

“This is evident in when Governor Schwarzenegger and the UC Regents met in 2004 for the Compact for Higher Education,” Butts said. “There they made clear that students and donations would be the primary sources of funding instead of state funding.”

“If we decide that it is time for our school to return to a true public university, we can make it happen,” Butts said.

Residents of California did not have to pay to go to a university like UC Santa Barbara fifty years ago, so I ask what makes us different from the students 50 years ago. I say there is no difference.
– Josephine Ampaw

“I hope this course of action will first off be taken seriously by our city, state and national leaders, who will execute a plan in order to make free higher education a reality after bringing the demands to the center stage,” Ampaw said.

According to Ampaw, accessible higher education is an investment in the future of the country.

“I believe students have to fight for free tuition because education is a right, not a privilege,” Ampaw said. “Every person who lives in the state of California, in the United States and across the globe deserves the right to not only a elementary and secondary education, but to a higher education as well.”

Ampaw said California has had tuition-free public higher education in the past.

“Residents of California did not have to pay to go to a university like UC Santa Barbara fifty years ago, so I ask what makes us different from the students 50 years ago. I say there is no difference,” Ampaw said.

According to Butts, the demand for a $15 minimum wage for all UC workers aims to facilitate the “American Dream.”

“There’s a whole class of people who aren’t given the same opportunity as middle and upper middle-status people. With expensive public education and a $9 minimum wage, they as a collective are not able to overcome poor conditions with hard work,” Butts said. “Instead, the Million Student March is trying to level the playing field and create accessible forms of social mobility.”

Butts said UCSB is a hub for student political engagement.

“Looking at the history of UCSB and the UC system as a whole, I think we’re the heart of the student movement,” Butts said. “By hosting the march here at UCSB, we’re simply entering the long history we’ve had in activism.”

Second-year psychology major Hannah Houska said the “the fight is now” against tuition hikes, because UC’s tuition freeze will end at the 2017-18 academic year.

“Our goal is not to continue the cycle of tuition hike and tuition freeze, but rather our goal is to lower tuition,” Houska said.

According to Butts, #MillionStudentMarch will encourage students to be more politically active.

“Come Thursday, it will be clear that frustration will bring students out,” Butts said. “It would be so easy to not come, but a million students across this country are going to have this issue be talked about, so activism is alive and well here at UCSB.”

I love this idea as well. However, there are three GIANT issues these reformers don’t seem to care about. 1. Pensions: There is no possible way the UC system can balance their budgets to eliminate tuition without reneging on retirement benefits. There is simply no way the State is going to pay for this deficit. I do not know if students in the school system would actually prefer the consequences of going to a “free” but low quality University. 2. GFC 2.0: If students were able to default on their student loans, another financial crisis would be triggered. The feds… Read more »

So you want us to pay for your college? Heres 3 reasons to laugh at them… http://takebackyoursixpercent.com/3-reasons-why-you-will-lol-at-the-million-student-march/

Wah, wah, wah – I realize tuition has increased exponentially since the late 90’s when I graduated. I was also lucky enough to have parents who paid for my tuition and living expenses. But seriously – eliminate the major revenue source while simultaneously increasing payroll expenses? Like seriously? This is one of the most utterly ridiculous ideas I’ve ever heard. Cry me a river baby!